I suppose that the one upside of all of this extreme changeable weather with torrential downpours one minute / bright sunshine the next, was the chance of a rainbow: 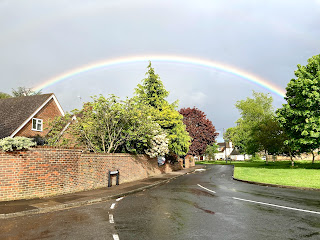 Not that I was expecting to find a pot of gold at the end of it, but I wasn't far off.

Sunbury-on-Thames seems a surprisingly inaccessible place to me.  Sure, it has a train line (miles from the centre of course in the time honoured 'this part of Surrey' tradition), it isn't a train line which is particular useful in terms of other Surrey locations, and despite being a stones throw from Walton-on-Thames, you can't cross the Thames because there is no bridge.  It all struck me as rather inconvenient!

But patience will always be rewarded in this game, and as I strode out down the main road, trying to avoid being splashed as cars drove through giant puddles, the pub came into view.  People were smoking outside, always a good sign, so I went for the stealthy across the road approach as smokers do like a good growl or sarky comment. 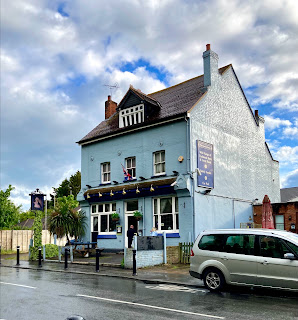 Admiral Hawke, Sunbury-on-Thames (1754 / 3183) is the name, and providing the most authentic pub atmosphere since my trip to Lichfield on 7th March 2020 was the game!  Paying £4.70 for a pint of Razorback was the one thing that didn't really chime with the whole environment (Thames premium?) but as I counted it out carefully in coins I'd probably had since Lichfield, passing it to a curmudgeonly wheezing old guv'nor, who painstakingly double checked I wasn't pulling a fast one, I did feel very much like I was in a pub of old.  Locals lounged around the traditional old bar area, laughing and joking, and given this rare pub-tastic opportunity, I asked them to budge up so I could squash into the corner between them.  The fact that I was wearing shorts seemed to be notable, but only because a guy in shorter shorts than me was promising to tell a 'great story' as to how he came to have a tattoo of a swallow on his right leg.  Well, he built up the suspense, capturing the whole pubs attention, before (from memory), it was the biggest anti climax ever.  Guinness the dog kept putting his toy in front of me and expecting me to chuck it somewhere, anywhere (there isn't room, sorry mi old mate!) and just when conversation had calmed down to halogen heaters, the main lady leapt back three feet, letting out a shriek, for a giant 'spider/daddy long legs thing' had just crawled across the bottom of her glass.  Aren't pubs great?  21st June?  Dare I dream? 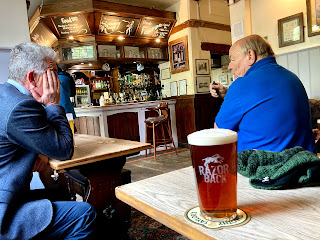 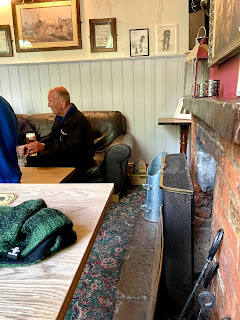 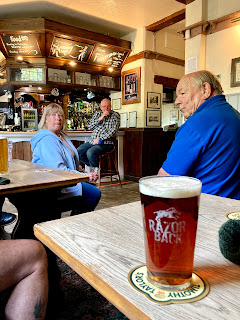 With no obvious route back to Guildford from here, my final pub of the night ended up being in that impossible to finish south-west Londonny part of the world, as I jumped off at Kingston.

Now I know what you are thinking, 'gotta push through the pain barrier and do both Si' but truth be told, I was spent.  By which I mean tired.  By which I mean I had nothing left to give.  Okay, I was drunk.  I tottered to the closest, with a sudden unusual craving for ..... CHOCOLATE. 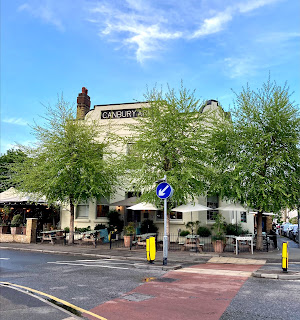 Okay, so I was going to blame the trees for obscuring the pub sign but now I look at the photo again, there is no excuse, it is not the Cadbury Arms, it is the Canbury Arms, Kingston (1755 / 3184).  Amazingly, I'd make a similar chocolate pub name mistake in Essex before the month was out.  Well, this was a 'contrasting atmosphere' with the previous pub if ever there was one.  London at its most London.  Bright shiny decor, boom boom boom of background music, cutesie staff whipping out stonebaked pizzas on boards to awkward students.  A young lad just beyond me was not plying his date with wine, but rather topping up her water - they then discussed the need to stay hydrated!  The yoof of today, how old I felt here in this pub!   Yes, a very different energy.  Colin, who had been so garrulous in the previous pub mainly as he had the same shaped head as most of the locals, refused to emerge from the BRAPA bag here.  Ordering a pint of Harvey's Best at least once in a BRAPA holiday not only seems the polite thing to down south, but does actually make me feel 1.3% more southern.  Sacrilege to say, but I'm not always a fan.  Occasionally, I really enjoy it.  This one did at least leave its mark, almost literally, I felt a gurgling sensation, then had to dash, it had gone through me Old Laxey style!  Thankfully, the loos were where I'd hoped they'd be.  A positive end to a tricky last pub. 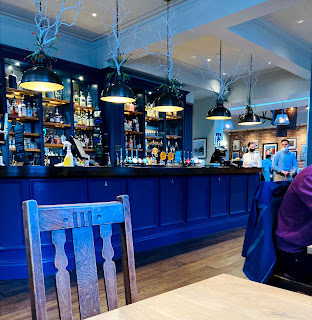 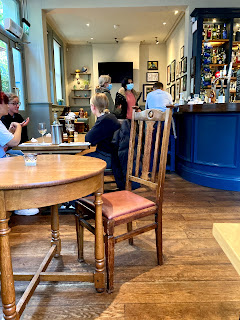 Like all of the world's worst train journeys, I had to change at Woking on the way back.  Some jolly young lads in the station loos (don't worry, I only needed a wee by this point) jokingly said "you were so well camouflaged, we didn't see ya!" when I tried to get in.  It hadn't occurred to me all day, but they kind of had a point. 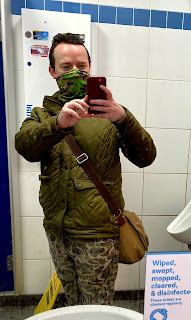 Luckily, a good night's sleep and brekkie with a bit of cheeky Homes Under the Hammer sorted me out, as I needed to be on good form for day 3 where #PubMan Ed Wray had kindly agreed to take me around those 'south of Guildford outliers'. 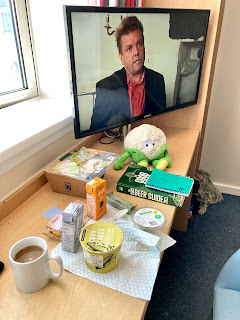 He tootled up to the Travelodge, and his commitment to assist the BRAPA cause is even more worthy when it is noted that he had to drive all the way up to Scotland the next day.  And not even easy Scotland.

We started at the most distant one, and I couldn't believe Surrey have managed to find a GBG tucked into the SW corner of the county even further away than Churt's wonderful Crossways Inn. 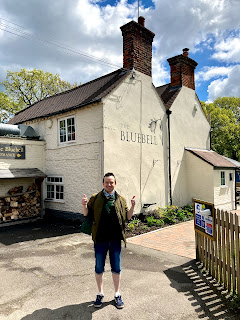 Note the random pile of logs not doing anything before we'd even got inside, tsk, and I'm sure Ed would agree with me when I say the Bluebell, Dockenfield (1756 / 3185) was not one of the most memorable pubs we'll ever visit in our lifetimes.  I wrote 'dull A.F.' in my notes at the time, unfair or not?  Comment below if you've ever been.  Of course, being in good company now, I was not currently at my most observant.  The pint of Biscuit from nearby Loxhill was very well kept at least, and I liked how on arrival, we said we were happy to sit inside and the barmaid was like "wahey, indoor pubs?  Novelty factor eh?" before shoving us behind the door and opening it just enough so we were closed off to the entire pub.  Truth is, outdoors might've been more fun!  More on that in part 6.  And why is it always the flouncier pubs that don't take payment AT THE TIME.  It so annoys me.  And always leads me to go on a wild goose chase looking for a member of staff which surely defeats the object of table service and customer's staying still so York scum like me aren't infecting gentle Surrey folk with god knows what northern viruses.  Oh well, back in the Ed-mobile and onto the next, which I will tell you about tomorrow.