It was a short walk back into Maldon from Heybridge, and that funny smell from earlier still lingered in the air not helped by the surprisingly hot bank holiday weather.  If you read to the end (don't scroll!  Oh okay then), you can see the cause of Essex smell complaints. 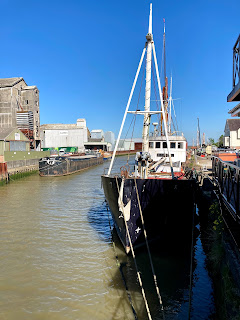 Having done the Wetherspoons earlier, there were two ticks left in town.  And this would bring me up to my regulation six for the day.  Don't you love it when a plan comes together?  We didn't need Tollesbury after all (grrrrr - I found out today from a fellow pub ticker it is reopen now!) 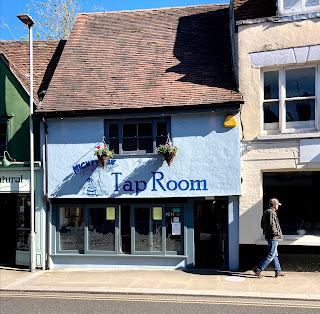 Mighty Oak Tap Room, Maldon (1786 / 3215) and I don't know about you, but tap rooms and brewery taps are never my most favourite of venues.  Combine that with my 'fifth pub of the day syndrome' (where my memory is at its worst), and it all made for a pretty underwhelming experience.  NOT that there was anything wrong the hole, the beer was good, but then again, it is hardly going to be poor quality in their own tap is it, that'd just be silly!   I stood by the door patiently, until I was shown to a table.  Perspex screens abound, even more noticeable here than in the Rose & Crown earlier.  I feel like a pissed goldfish.  A peppering of customers, beyond me and to my left, I don't think anyone so much as glances at me in the entire thirty two minutes.  A couple stare at the laminated beer list for ages, all furrowed brows, and then order Pinot Grigio.  I think that is what the kids call 'a mood'.   Finally, a bit of drama as an elderly bloke, all a blustering fluster, bounds in.  "I left my phone here!" he confidently declares, pointing an accusing finger into the guilty corner like he's sentencing it to death.  A quick search by the staff, Pinot Grigio couple, and myself (well I lift up a cushion near me as a token gesture), and the poor bloke is out of luck.  'Have you tried ringing it?',  'It definitely isn't here!', 'If you have a car, it could've fallen under the seat, mine does that'.   He leaves with fresh doubts in his mind, a tormented soul, a shadow of the confident man who arrived, questioning the very meaning of life, or at least, where is phone was.  I'm not far behind.  I have a sixth and final pub to do. 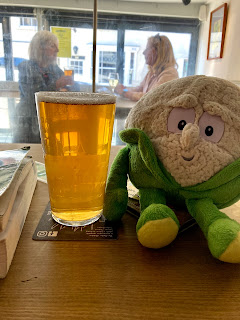 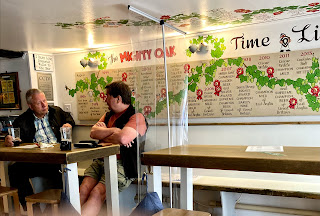 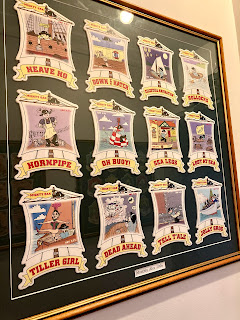 One pub to go, and a nice stride out in the evening sun in a last desperate attempt to sober myself up.  I have high hopes for this next one, it sounds like the 'pubbiest' of the three. 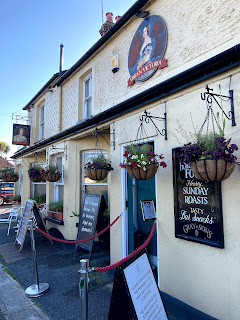 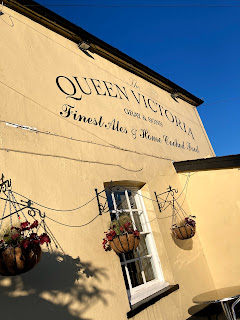 But to my surprise, Queen Victoria, Maldon (1787 / 3216) sends me on right wild goose chase, snaking around the back of the pub, following arrows and cordons, until I'm right at the back of the pub 'twixt kitchen area, drainpipe and I think a marquee, where two stern white shirted staff tell me to sit on a bench and they'll come for my order.  An accompanying dog with a very wet nose pushes it against my hand - ewwww.  I do cat noses, but not dog noses.   It seems indoors isn't even an option here save for a 'toilet experience'.  "Ho, ho, ho, you'll enjoy it in the sun!" says a bar lad to appease me when I look sad.   A look at the layout inside the pub when I do go to the loo makes me even more surprised.  It is a theme I found in and around Maldon all weekend.  Pubs with the kind of ultra strict regulations that doesn't allow them to breathe.  I experienced none of this in Surrey, or other Essexy areas, so I don't understand the need for it here.   I can only think they've had trouble with locals not obeying rules, and they've had to be ultra vigilant?  The Adnams Southwold was a good drop, but with zero humans in sight or even earshot, I was bored witless so resorted to selfies, listening to music, and playing with this new bus app I'd downloaded. 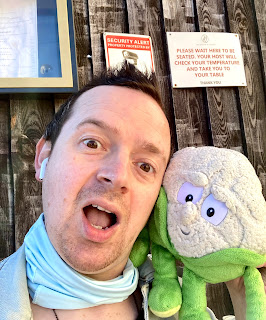 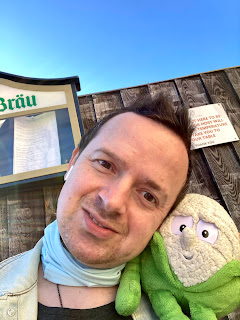 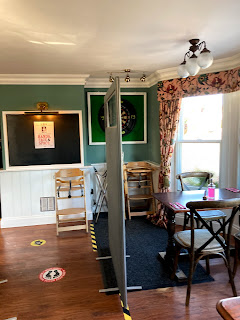 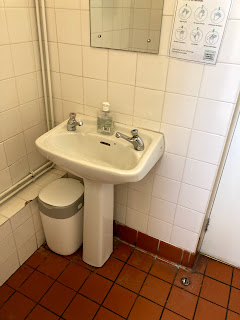 Sunday dawned bright, wide-eyed and full of hope.  After all, as you will know by now in BRAPA, where there is an 'up', there is a 'down', invariably followed by another 'up'.

This was the key moment in the weekend, time for the pub I was most desperate to get ticked, and my furthest south remaining Essex tick - and I do like this 'working my way northwards' idea.

South Woodham Ferrers was far enough, but then I had what looked like an 'okay' walk into more rural climes.  It was actually the most terrifying walk for many a BRAPA year, and I would not repeat it!

Woodham Road was like walking down the side of a motorway, and when I turned off and the traffic became a bit less busy, the total lack of pavement or even grass verge with a fair amount of traffic made it rather traumatic.  Was the pub worth the wait? 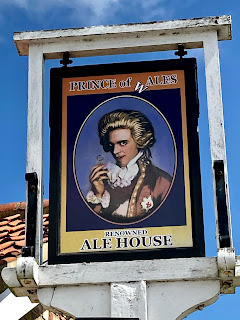 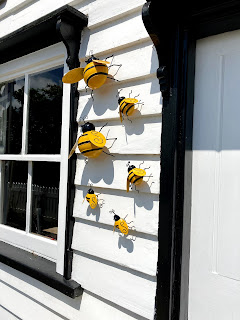 I walked around the back of this classic old weatherboarded effort, Prince of Wales, Stow Maries (1788 / 3217) and I wouldn't mind betting it had been open a lot longer than the advertised 12 noon, for there were already a big group of jolly local boozers under the awnings with pints in hand.  All shiny bald heads, sunburn and cheery expressions.  Owned by a Hull City fan too I'd been told, Bonus point, or is it a Pepis point (that's a joke for the purists).  I dumped Colin and my bag in a raised grassy area, and went to investigate.  Pub interior was a beautiful thing, and plenty of time to explore as it took about ten minutes before another human appeared!  Was starting to think the locals had brought their pints with them, when a friendly young dude appears, by which time a thirsty queue had formed behind me, all asking similar questions.  The beer range was plentiful and 'interesting', the kind o' thing the Essex beer types will travel miles for, though with each passing year, I subscribe more and more to the Taylor-Doom view.  All about the pub innit?  The surroundings were leafy, the tables around me filling up as the minutes went by, a 2pm 'big flyover' (planes, not more road trauma) seemed to have swelled the crowds further.  It would be sheer bliss if only I could properly relax!  To relax, I needed a route back to civilisation by which I mean I needed a taxi.  I think I set a BRAPA record (held since Churt, July 2020) for the number of 'taxi fails' as I was declined time and time again, for so many reasons, mostly they wouldn't come to Stow Maries!  I had to share my pain.  The couple behind weren't naturally chatty, but I imposed my dilemma on them.  It was cathartic at least.  Back indoors, the friendly barmen gave me a little used piece of mottled cardboard with taxi numbers on.  The 4th one did the trick!  I got another pint in celebration.  The couple got replaced by some TOWIE types.    They debated whether the fish coming to the surface of the pond meant they were starved of oxygen, or simply very happy.  What a fun listen to enjoy your 'Child of Jago' with.  I think we can safely say this is one of Essex's finest pubs in what is a strong county. 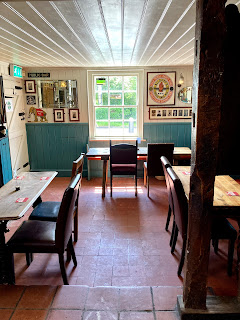 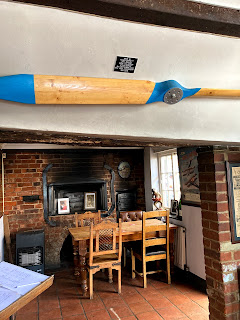 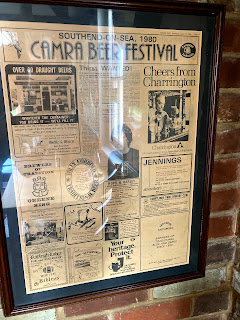 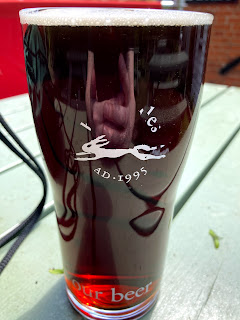 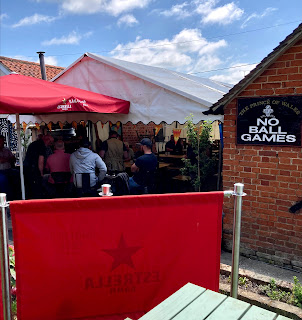 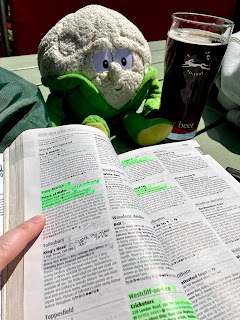 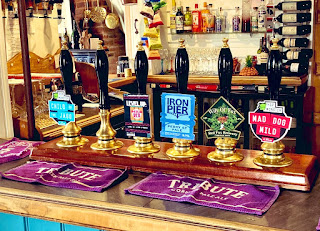 Oh, and I meant to say the taxi booking process was made more difficult as I realised I had no idea how to pronounce Stow Maries.  The ultimate Darius Vassell of Essex villages.

The taxi was here, and I'll tell you about my next three crazy rural Essex pubs in Part 4.