Having managed to complete 2021 Good Beer Guide cross-ticking in a record four days, an exercise involving some early mornings, very late nights and a lot of coffee, I can now get back to the blogging.  There were casualties, notably two green Stabilos, less notably, the remnants of my sanity.  Results will follow of course, when the embargo is lifted on 29th Oct, with a blog assessing the damage, and plans for the year ahead.

I was actually going to celebrate this evening with a bonus 'pre-emptive' ticking trip, but my train was cancelled at the last minute.  Hull Trains, cancelled?  Surely not!  (that's a joke for the northern purists).  So I thought I'd make myself useful and tell you the TRUTH about Andover.

Monday 5th October, and the sun was finally shining in Basingstoke (something I felt I'd never see) as I 'enjoyed' the worst scrambled eggs on toast ever ........

.... I made my way west to the town of Andover, for its BRAPA debut, reflecting that my modest progress so far was at least, encouraging : 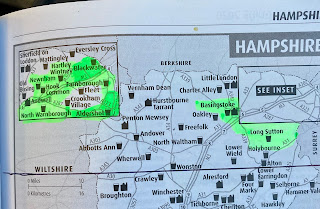 "Shithole!"  "Contender for worst pub/beer town in the UK" "Don't punish yourself Si!" were amongst the reactions on Hashtag Beer Twitter at the mention of Andover.
I couldn't really see the problem as I made the 15 minute stride from railway station to town centre, around the back of the Town Mills, old couples feeding bread to the ducks (isn't that cruel now or something?), the sun glimmering on the river ........ 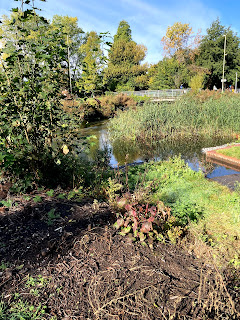 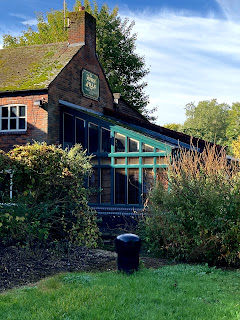 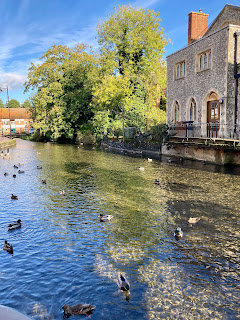 As I admired this glorious scene at 10:30am, even West Berkshire's most even, fair-minded commentator Tim Thomas, said something along the lines of "look out for the giant rats on the river .... they might pull you under and bite your face off".  Not a direct TT quote, but close enough.  I still had that barmaid in the pub in Newnham lurking in the back of my mind, obviously.
So is it the pubs that are the problem?  Well, let's not deny they weren't the strongest suit. The first two would be most bland.  But I'm loathe to criticise.  After all, all four are open at or before 11am, on a Monday, 'in these unprecedented times', and not ONE of those is a Wetherspoons.  Name me another town in the UK that can boast that.  I'll wait.
No, the problem for me, lay with the people.  A more miserable bunch you'd have to travel to Kettering to encounter.  Dishevelled, depressed, languid, bored to the point of rudeness.  That'd be my abiding 'negative' memory of the town. 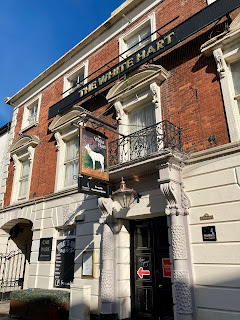 In fact, my first encounter with an Andoverian was the worst as I tried to 'gain access' to the White Hart.  Courtyard gate open, doors open, I wander in.  A masked woman stops me in my tracks "WE DON'T OPEN TIL 11" she impolitely bollocks.  "Oh okay, I'll be back!" I say breezily, inwardly wondering why pubs do this.  Happens far too often.  Unlock and open their doors before opening time.  In a 'public house'.  Can't they guess what is going to happen?  Idiocy.   She didn't say a single word in reply.
Luckily, this next pub WAS open before 11 ...... 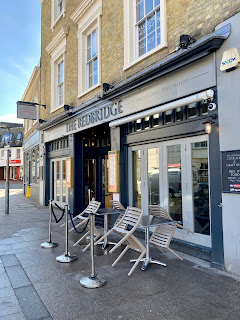 Redbridge, Andover (1876 / 3093) was our 'saviour' in question, though even as I tested & traced on the QR code outside, the woman watching me from within was hardly forthcoming until I tentatively pushed the handle and asked if they are open, and she's like "hey yeh, of course!"  If the above photo makes the Redbridge look a bit bland, well that's because it is, but there's a case for the defence too.  I suddenly realised how knackered I was from Sunday's exploits, as I tried to squint at the 'beer' blackboard to decide, nearly opting for a pint of 'Tottenham v Chelsea' at an astonishing 19.45% abv before realised the truth.  St Austell Tribute it was, the only one, good condition, go figure.  Martin would be proud.  It was slow going, I was nursing it, more hungover than I cared to admit, though something strangely liberating about a Monday morning pint.  It allowed a little 'community' of locals to assemble, most of whom had a medical condition, hi vis jacket, and/or shopmobility scooter.  It was in danger of out Spoonsing Wetherspoons.  A bloke rang someone about his recent 'ripping of the base of his spine', a luminous Geordie asked if he could share my table, but looked glum, especially as his Thatcher's took an age to arrive (and when it did, it was Strongbow).  It was an effort to pull myself up and away for pub two, but us tickers can't sit idly by. 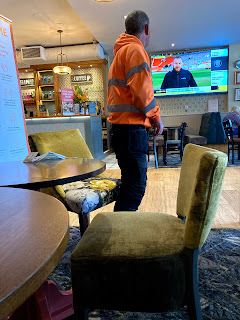 I checked my watch, it was well gone 11:30am now so I returned to the White Hart (1877 / 3074) , a Marston's house so dull that it made the Redbridge look positively banging.  It's not like you couldn't appreciate the 'shell' of the pub, the historic uneven creaky skeleton.  But Marston's had blanded the shit out of it to such an extent, you couldn't help but feel depressed for the duration.  The Wicked Witch of Past Opening Times had disappeared, so a young bloke swarms around me, flayling limbs, and in the mayhem, I pull my mask down to order my pint.  "Dunno why I've done that!  Haha"  I say, quickly raising it again.  That gets the briefest chuckle from him and a colleague, and soon a pint of Razorback is upon me.  Well, I ORDERED Razorback, but from quite a distance, straining my eyes, am sure she's pulling the Lancaster Bomber pump.  Remember in days of yore, when leaning on the bar, you'd see them pull the wrong pint and quickly correct them?  Can't do that anymore!   Oh well, potato potarto, Razorback, Bomber, all the same to me.  It's a pint of bitter innit?   Bit of decent music, Stray Cats lifted the mood briefly.  Why has the pub got Christmas/Hallowe'en decor on display?  Not many other customer, but those that are here all have coughs.  Old bloke staggers to bar, he's never heard of this Covid mullarkey and is astonished when the barmaid tells him he needs to find a seat, and she'll be right over.  He pulls out some cash.  "No!" she tells him "I bring your drink over, and you pay then, you can't stand at the bar!"  He turns away, gawping, wide eyed, almost unbelieving.  Pub child Kiera(?) starts balling her eyes out.  Perhaps cos 'Walk of Life' by Dire Straits has just finished.  George Michael sooths her.  But she's taken outside anyway.  It's that kind of a place.  Fairly dreadful. 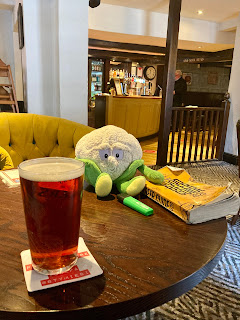 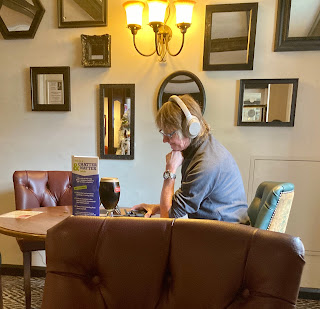 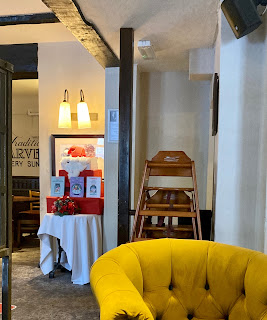 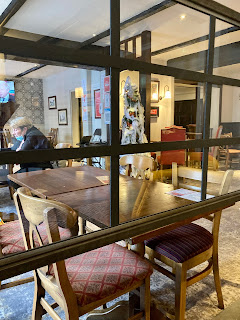 Pub three, back where I'd come from (no, not York) and it looked a little bit more enticing ...... 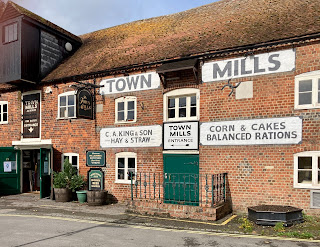 And it is probably fair to say that Town Mills, Andover (1878 / 3075) was the strongest of a fairly weak Andover quartet.  It was a Wadworth pub, a bit foodie and airy downstairs but the gaffer was the first (and only) person with any people skills I'd encounter in the whole of Andover so that was notably in itself.  6X, always a great beer when kept well, was on fine form, and as a Northener, I've been to an incredibly small number of Wadworth pubs in my lifetime so the beers don't bore me like they might bore southern types.  Prices however, were proper 'riverside extortionate'.   Just across from me, a group of four with learning difficulties were having lunch, and I noticed they were being looked after very well.  The main soul of the pub was found upstairs however, as my increasingly frequent toilet trips helped me discover.  Pool table, and a multitude of darker, more atmospheric rooms and spaces.  Shame I couldn't drink up here, but I guess they wouldn't want to carry a pint on a tray upstairs!  The music playing was so bizarre, even Shazam didn't recognise it.  After all, if it isn't Dire Straits, is it really fit to call itself pub music?  But on the whole, I found this much more enjoyable than the first two.  Plonk it slap bang in the middle of Kelham Island, you might say it is weak.  Everything's relative.  And in Andover, you could argue, everyone is a relative (of each other).  On that note, I best call it a night before I get into trouble, and see you on Sunday for Part 6.  I'll leave you with the pics. 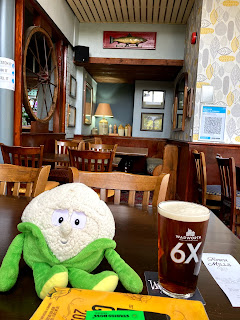 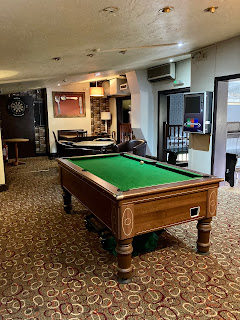 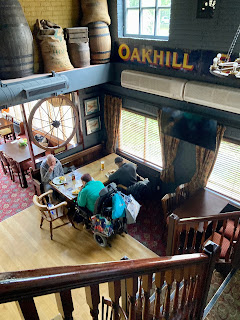 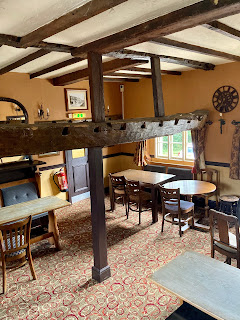 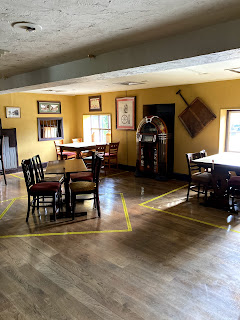