My final day in North Hampshire was here, a productive rollercoaster of pain, if you like.  A few days ago, a local reporter called James had spotted me on Twitter, and asked if he could interview me about BRAPA for the Andover & Basingstoke local papers.  I consulted my back room staff (well, that odd little cauli) and told him I'd be more than happy to do so.

Unable to make Fleet the previous day, I told him to meet me in Oakley, a village just a short bus trip from my Basingstoke lodgings, where one of my 'easier' remaining pubs could be found.

I got to the bus station in good time, with the intention of getting to Oakley for about 11:35am, so I could find him outside, and we could go in together when the pub opened.

It had been a five day session of typical BRAPA dumb luck, and this next bit probably even beat the floods at Chobham, mysterious Virginia Water train woes and locked in a Camberley shopping centre, for ridiculous bad luck.

Bus leaves Amazingstoke (thanks Quinno!) on time, but soon we hit traffic, goes down to one lane, huge tail backs.  20 mins later, barely any progress.  Bus drivers turns to us and says 'two more sets of roadworks after this too ho ho!'  Luckily, James messages to say he's going to be a bit late too.

Finally, and I'd be annoyed even if this was a regular 'tick', we were moving.  I press the bell for the Rectory Road stop, which I reckon is closest.  He doesn't stop!  I ask what's going on.  He says 'we don't stop at that stop'.  Electronic lady had said otherwise.  He drops me on the busy, pavementless B3400 Andover Road, almost in the next village of Deane.  Already late, I'm furious.

Luckily, the cars are a nice bunch, and swerve into the centre of the road for me, and respond to my waves of thanks.

Eventually, I reach the Oakley turning.  Pub is still quite a long way into the village.  No pavements here either, but a gentle enough place.  Or so I thought!  I'm striding down the right hand edge, but EVERY passing car seems to expect me to stop, and get tight into the side.  NO NEED DICKHEADS!  This lorry driver gives me an evil look and perhaps the wanker sign, either that or a fly had got in.   In fact, every car I see, I half expect to be James having given up on me, driving off!

Gone 12:30 when the pub comes into view, and even then, blue anorak lady blocks my path.  The arrows confuse me and I circumnavigate the outside of the pub for no reason!

Once inside the Barley Mow, Oakley (1887 / 3104) , I quickly scan the beers.  The landlady blinks.  Two old locals stare at me.  Because I loiter, looking for the most probable James, one of the old blokes barks "SIT DOWN!".  Seriously, Oakley has all the grace and charm of a reversing Basingstoke dump truck, but with an inbred werewolf village mentality.  But that's probably not going in the article.  I see a guy in the corner, with notebook and pen, and realise it must be James.  I apologise profusely for the long delay, removing my mask to reveal a face full of sweat, despair and anguish!  James seems fairly unperturbed, supping a pint of Cider.  I realise he has a better job than me.  He's a young chap, softly spoken, kind eyes, and looks a bit of a less brash version of one of my cousin's (who surname incidentally, is Hampshire).  The combination of these factors, a well kept pint, and a ten minute chat before we get onto the interview all help relax me after that earlier fiasco!  Interview all goes well, he wants to meet Colin too, I make him do the highlighting (top honour), and only Kate Bush warbling Wuthering Heights on a giant plasma behind me means I occasionally have to repeat some bits.  Occasionally, the local grump scowls over, probably think we're on some Grindr date or something, I don't know what weird villagers think in 2020. 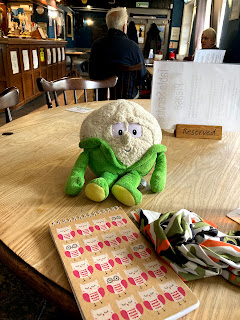 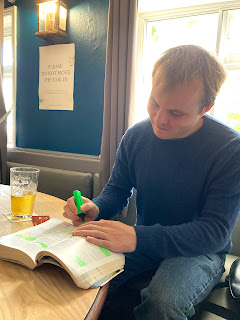 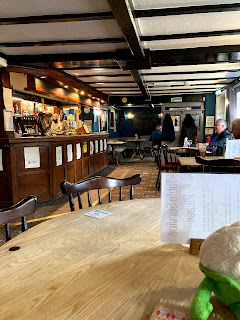 James kindly agrees me to drive me on to my next pub, which is a toss up between two, but I go for the one which is less off the beaten track for fear of getting stranded (I'm meeting Citra later on!)

Back in his car, breaking news comes through of Greene King pub closures and his boss wants him to jump straight on that!  Life of the pub reporter eh? 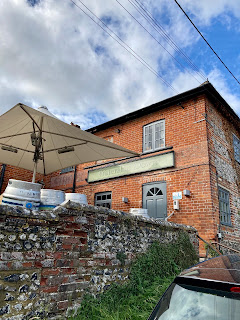 Yes, leering at me with dining pub contempt written all over it from just off the main road was the Watership Down Inn, Freefolk (1888 / 3105), and if I was hoping pub 1888 would be some fun, gory, nasty Whitechapel nightmare of a boozer, nothing could be further from the truth, though I suppose Watership Down is a bit of a tough watch now I think about it!  The wallpaper, wicker rabbit, and local rabbit prints on sale for £80 drawn by overrated local artists will make any self respecting pub fan want to puke their eyes out of their sockets, so I sit at an outdoor table where only a posh old fart boasting about how many different types of fish he's eaten (like a massive self satisfied seal), can annoy me.  Someone on my Twitter tells me this pub was once a proper trad old school boozer.  I don't doubt it, but hard to picture today.  Flowery barstaff, the only things not bunny themed (this isn't the Playboy mansion you pervs #WokeSi2020) are breezy and efficient, quite a few local ales are on, and whatever I'm drinking is a quality drop.  'Bright Eyes' was MY song when I was born, says my Dad, but I was feeling far from bright eyed, only two pubs in!   I think the Oakley trauma had well and truly taken it out of me!

Now, HAD this been the 2021 GBG, I could've now got ticks in Overton & Whitchurch, but as I was using the 2020 Guide at the time, I was out of options, so all that remained was to head back for two hours kip in my hotel before the final hurrah of an evening session, which I'll tell you about tomorrow.
The bus journey back was notable for a golf ball rolling around at the front, and the way this week was panning out, I was imagining it somehow getting lodged under the brake pedal, creating a Final Destination / Speed / Father Ted Milk Float style episode.
Hopefully, the bad luck was over.
Fangs for reading, Si