Excited and raring to go, to the point of impatience, for my five day Autumn BRAPA holiday in North Hampshire.  This impatience was borne out of paranoia.  A new national lockdown?  A travel ban of York scum entering the South?  A message on the NHS App telling me I needed to isolate because someone I'd been in a pub with had caught the Virus?  I was sure something would go wrong at the 11th hour.

Mercifully, it didn't, and on a soggy saturated Saturday morning, I met local pub hero Citra (though some people call him 'Mick') at Hook station.  An old lady on a Zimmer stopped moving in the one place that stymied my progress.  Her daughter tried to teach her a lesson in spatial awareness.  Too late in her life for that, I thought, raindrops dripping down my neck.

I jumped aboard the Citra-mobile, and a few short minutes later, just shy of 11:30am, we were at our first pub of the day, in North Warnborough.  It was nice weather for ducks, and they'd have approved of the fantastic giant pond.  A mysterious non-smiling man was waiting to get in already, I hate not being the first customer of the day in such circs! 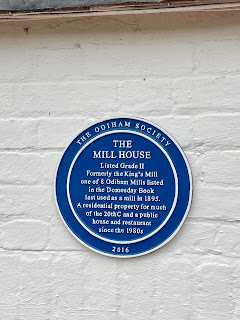 The gentlefolk of North Hants are obsessed by mills.  All they talk about.  They had eight once upon a time in this Odiham area.  What better way to honour a past mill than turn one into a Brunning & Price?  That's what they'd done here at the unimaginatively named Mill House, North Warnborough (1863 / 3080) which probably warrants a Simpsons joke if you can be arsed.  Ah yes, the B&P chain.  Remember when I only thought they existed in Cheshire?  Oh, how we laugh now.  They are never going to be pub of the year material, but if they are going to exist, they simply HAVE to be like this.  Unashamed grandeur, no holds barred, balls-to-the-wall efforts.  Think Pant-yr-Ochain near Wrexham, and NOT the Fox Revived at Norwood Hill.  The stunning grounds matched by a baronial hall style myriad of roaring fires, plush rugs, suits of armour, furry throes, and more unnerving Victorian bog 'humour' than you can shake a pint of their average house ale at.  I opted for the Productivity Club, merely because I thought it was a terrible name for a beer, evoking thoughts of my attempts in my banking job to fiddle my figures to be 100% productive on a daily basis.  It was a well kept drop, much better than many I had today.  The barmaid was friendly in that flaky B&P 'don't demand too much of me' kind of way.  Citra grabbed the green highlighter pen with gay abandon, and I'd finally chalked off the first of hopefully many pub ticks in the coming days.  On the way out, we were waved in a general  downstairsally direction.  Five minutes later, we realised we were still lost and a friendly couple said "maybe they are trying to keep you here against your will?" which would've been amusing if it hadn't panicked me slightly.  Citra finally bust open an unlikely patio door and we clambered out of an enclosed garden, back uphill towards the car park.

Next up, Citra randomly mentioned the pub at Long Sutton.  Wow!  I hadn't been expecting this, but I jumped at the chance.  In one of my Hants planning sessions, I'd ranked this one 'top 5 difficulty' in terms of getting to / limited opening hours.  Take me there!

The location was rural in the extreme, it all felt a bit other worldly, and we hadn't even got inside yet ..... 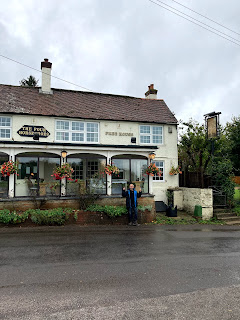 You know when you are rooting for a pub, and it sort of lets you down?  That was my story here at Four Horseshoes, Long Sutton (1864 / 3081).  Quiet on arrival, a kind, ancient looking couple who  may have presided over this pub for centuries stand at the bar, and Mrs Horseshoes sends us back towards sanitiser and QR code.  The two real fires could do with being lit, it is particularly chilly, but the pub itself is a rural jewel in terms of character.  Sadly, the ale quality hadn't read the script and our Lockdown Bitter is particularly dreadful on a week of generally good Hants beer.  Would the Palmers have been better?  Citra's expression is one of pain, as each mouthful goes down, and the pub has now filled up with locals, all on the same ale, all eyeing us 'American Werewolf in London' style.  You almost feel you have to whisper when chatting.  One bloke is asked if he has a smartphone.  "I've got a phone, but it isn't very smart" he admits.  Not a lot of QR code reading going on here, signing the guest book is far more popular.  An impassioned debate on pies soon followed, revealing lamb & mint as a lot more popular than steak & kidney.  I don't agree.  But luckily, and this could be a tagline for my entire blogging, no one asked for my opinion!  A pub I wanted to love for 'sentimental ancient pubs of yore' reasons, but just couldn't, Gales beer towel or not! 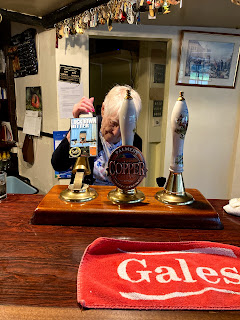 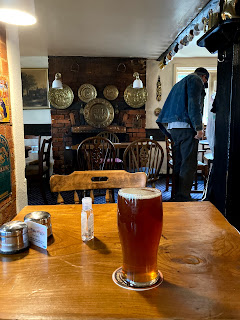 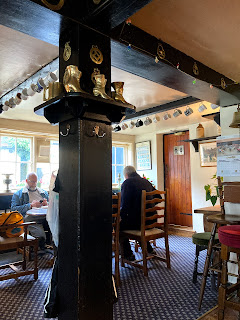 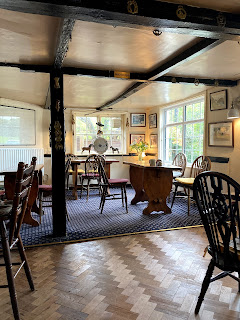 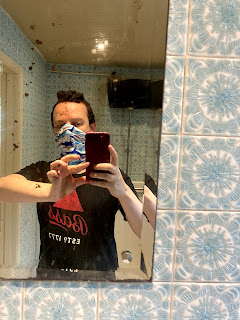 I asked if we could jiggle the pub order about for this next one.  I'd spotted it might actually close mid afternoon, even on a Saturday.  Best to be on the safe side, and get it done whilst we had the chance.  It was back towards Hook, probably within walking distance.

Old House at Home, Newnham (1865 / 3082), sounds like a friendly type of place, doesn't it?  Think again!  The 'painted on the wall' pub sign was the first sign thing all might not be rosy in the OHAH garden.  Probably just means it is a dining pub, right?  We can handle that, so long as drinkers are treated with the same respect as those ordering grub, right? Citra spies the QR NHS scanner, so we do the honours, feeling pretty proud of ourselves, it becomes second nature after a while.  Barmaid says, rather snappily, 'can you sign in?' and when he tells her we did the reader, she says 'I don't trust that thing, sign the book as well!' so we do!  We are sat down begrudgingly (or so it felt) at a table that would probably seat six to eight upper middle class diners.  When I ask for a pint of Bunny Chaser, she says "they've all got queer names these bitters!" and by this point, I'm half expecting her to whip off a mask to reveal she's actually Cooking Lager off Twitter.  The ale is good, it must be said.  Daddy BRAPA rings to do Hull City predictions and am sure a young barman indicates at me to tone my voice down a bit!  Oops.  But four wins out of four, am bound to be getting a bit excited!  On the way to the loo, I temporarily forget to put my mask on, and when she reminds me, I say "oh sorry, it's so easy to forget isn't it?" to which she retorts "it won't be when you've been fined!"  Charming.  The decor seems to all be animal skulls with antlers, bet she bit their faces off herself and spat them into a stew.  Onto the next. 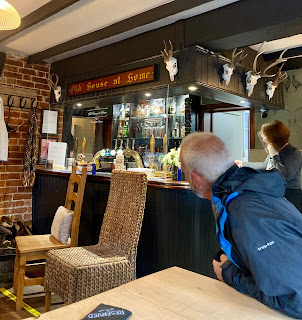 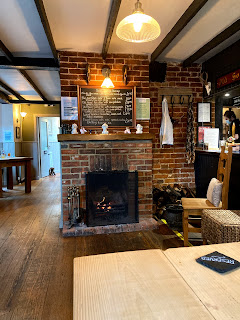 Well, if it sounded like a fairly inauspicious start to be North Hants adventure, I suppose it was at this point.  But fear not, things were about to improve rapidly.  Citra's mates had even messaged him to say "is Colin on his way yet?"  Not Si, not Citra, but that bloody Cauliflower.  Join me on Wednesday night for part 2.