The folk of Farnborough seem a bit more smily than their Basingstoke counterparts  I put it down to being in that east Hants/ north west Surrey corridor including the likes Aldershot, Camberley & Weybourne, where people might be a bit frightening but if you hold eye contact for long enough, they will eventually stop growling.

I walked from the Tilly Shilling Wetherspoons to the southern outskirts of town, for my second of three GBG ticks.  It seems a sad state of affairs when the local MaccyD's is the prettiest pub building in town, but there we go ....... 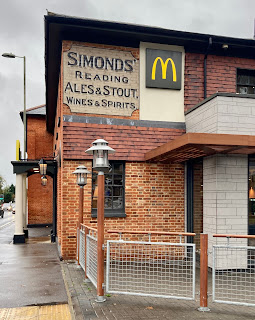 In fairness, it did used to be a pub called the Tumbledown Dick, named after Richard Cromwell (son of Oliver) who first introduced real ale to the pub, before falling A over T down the cellar, straight into a vat of pale ale, where he accidentally wet himself in the trauma.  He then climbed out, noticed how murky the vat contents now were, ready to pour it away, but his brother Tarquin said 'not so fast bro', had a sip, loved it, and thus, craft ale was created.  And that is a BRAPA fact.
It was 5pm, I'd still only done 2 of the 6 pubs I required to stay on track, today had been similarly traumatic to Dick's tale.   After a lengthy stride, the pub finally came into view on a barren main road like an Ember Inn would on the outskirts of Birmingham ..... 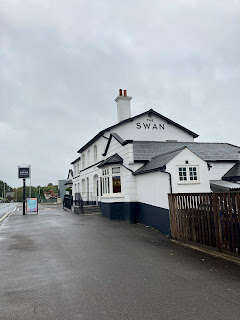 And imagine how my heart sank when I saw this sign on the front door ..... 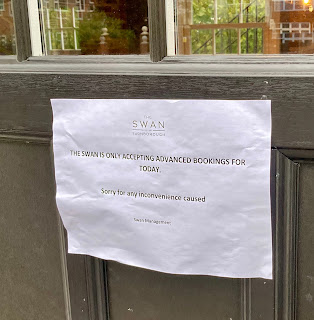 Well I hadn't walked all this way to slope off disconsolately yet again, Chobham style, so I went in to plead my case and the young guy quickly interrupts and says "don't worry, that only applies to diners"  Phew.  Well, it could've been clearer!  Swan, Farnborough (1872 / 3089) is not a pub that will stick long in the memory, being little more than a glorified restaurant.  It is sparsely decorated, it echoes and is rather drab.  The furnishings are softer the further right you go, towards the bogs, but this area is even more dining-led.  I was cheered at least by the Mum of a dining family, who had lasted less than four days before failing Sober October.  Her father, she admitted, to her teenage boys horror, is going to try Gay May in 2021.  She says she'll most likely try 'Jeans June' which rightly caused much derision.  One ale on, no idea what it was, but it was going down nicely.  It annoys me that places like this keep their ale so much better than so many traditional boozers!  Colin got jealous as the afore mentioned family revealed a hidden tiny dog in a blanket called Nuala or Hula, whom the staff fawned over.  Three men came in just to drink beer, that seemed notable. And the place smelt like pork scratchings.  Careful, this could almost be endanger of feeling like a pub! Then, everyone abruptly left, and soon it was time to do the same.  I looked up at the bar to say thanks and bye to a staff member, but they were all down in the dining area.  Standard. 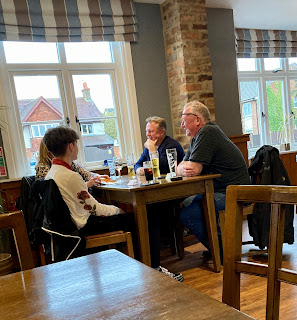 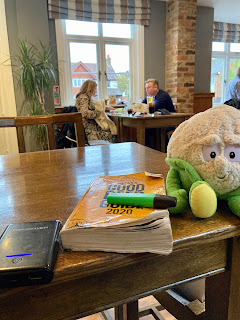 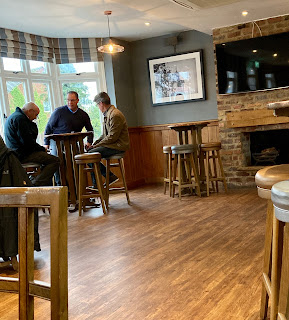 Next, I walked back from whence I'd came, and beyond, to reach my third and final Farnborough tick.
I was still strangely captivated by the McDonalds so took another pic. 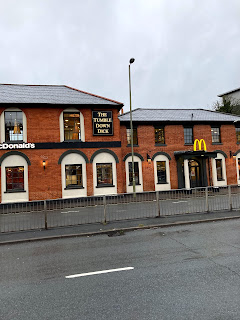 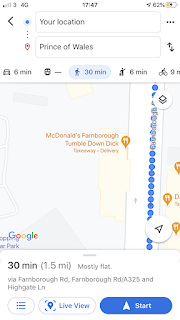 It was well gone 6pm by the time I reached the pub, nestled happily in the backstreets of North Farnborough ..... 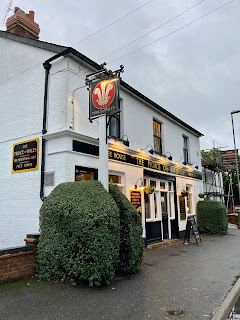 The front door was locked, as often is the case with southern post-Covid pubs, so I had to enter through the back garden, where a Hartley Wintney style gaggle of rowdy, joyful locals were nestled in amongst the damp picnic benches, living the dream.  Welcome to the pub everyone had been recommending me since by late July trip to Surrey, the Prince of Wales, Farnborough (1873 / 3090).  'I'm very sorry ....' begins the long haired friendly dude who comes to greet me.  'Oh what now!' I'm thinking, totally sick of this Sunday.  He tells me there isn't enough room outside, afraid I'll have to sit indoors, and then leads into an empty room, roaring fire beside me, plonks me on some bench seating.  Honestly, the sacrifices we have to make at times(!)    He talks me through a beer menu (yes, there are that many on) and I go for a Milk Stout on the basis of how cold and wet I am, not that he needs my life story.  I was going to rush this pint and get the 18:58, but some pubs (and some beers) aren't for rushing.  With my feet still soaked from the floods of earlier, when both barmen leave the room, I take my shoes off, place them on the hearth, and warm my feet on the fire.  Finally, today's efforts seem worth it.  Two moments of slight peril.  First, a massive 'ARRRGGHH' from behind me at the bogs, as a man burns his hands on the ridiculously hot tap.  Jumped out of my skin! And when I pay, I realise I'd not paid for my drink in the Swan!  A brief feeling of extreme guilt quickly subsided.  That's the problem with these pay at the end places, and staff going AWOL.  It was always going to happen eventually.  One of the guys returns to the room for a chat, and, remembering to put my shoes on, I finally leave, happy some good has come from today! 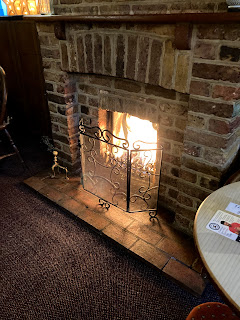 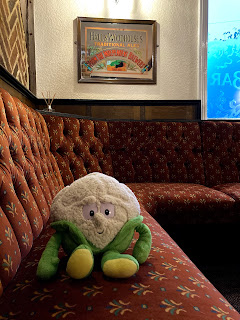 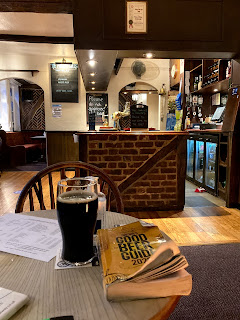 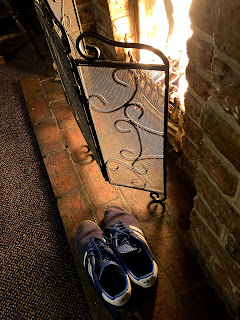 In an ideal world, that would've been a great way to cap off the day.  But of course, it was still only my fourth pub, even if it was dark now.  I still had two to do, and my sleepy sense of well-being garnered from the PoW had to be quickly forgotten, and I had to force myself back to reality.
My plan was to catch a train to Fleet, where I could get the pub there done, hopefully combined with the walkable Crookham Village to make up the six.
But today being today, I boarded a delayed through train to Baskingstoke, rather than the Fleet stopper, which turned up the EXACT time the other one was due!
Only one thing for it, my two Basingstoke 'Spoons had to be ticked instead.  At least being a Sunday rather than a Saturday, there were no queues.
I started by walking through the wrong door, into an Italian restaurant!  Luckily, no staff were around and I was able to undo my mistake, without booking a Carbonara out of embarrassment.
Angel, Basingstoke (1874 / 3091) might just be notable in the history of BRAPA for being the first pub ever where I did not speak to another person (including staff) at any stage.  Wetherspoons is all App now of course, so seeing no one on arrival, I checked in, opened the App, perched at a high stool in the corner, and ordered my ale.  It was taking a while, so I went for a wee, and when I came back, my beer had arrived (so I hadn't had chance to say thanks).  The beer itself was JW Lees Gold and was glorious.  I looked up to the heavens, said a little prayer for my JW Lees loving friend Tandleman, currently isolating (though he probably wasn't back then), and a loud extractor fan started whirring, which might've been his way of saying 'okay Si'.  No chance of interaction with the two couples around me.  I suspected both could be 'first dates' such was the frenzied conversation, zero physical contact and attempts to make an effort with each other for the duration.  I looked at Colin and told him he could've at least put a bit of mascara and foundation on.  It's called making an effort mate.  Jeez Louise. 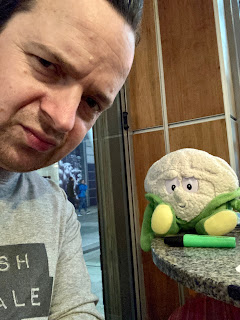 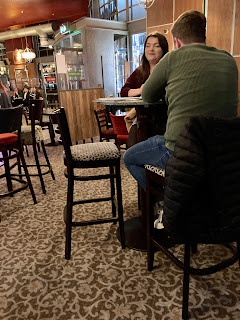 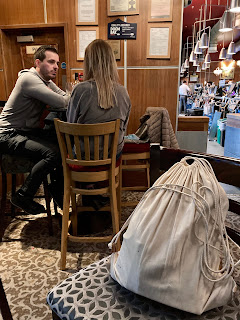 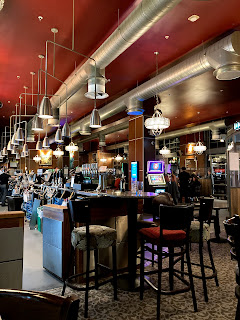 The closest pub to my Premier Inn seemed a good way to end the night ....... 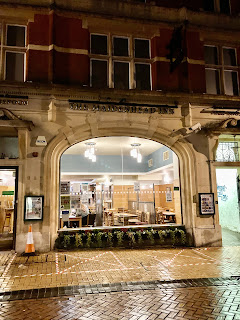 It was 20:59 when I entered my final pub, Maidenhead Inn, Basingstoke (1875 / 3092) another Wetherspoons, meaning I had got in before last orders, which seemed unlikely back in Farnborough at 4pm .  It had a real end of the night feel, and the young army of staff looked like they were organising a secret party 'below stairs' constantly running up and down, shouting at each other to bring drinks down and stuff.  Such distraction might've explained what happened next.  I'd ordered using the App, and it was a good ten minute later and still no sign of my drink.  Peering down at the bar, I could see a pint of what looked like real ale on a tray.   After five more minutes of not much happening, I walk to the bar (highly forbidden!) and ask if that might be my pint.  "Yep, that'll be it!" says the barmaid, and walks off.  Hmmm, wasn't sure it was supposed to work like this.   My ale tasted like one which had been sat on the bar in a slightly grimy feeling Wetherspoons for 15 minutes, which of course, it had!  Still, you gotta question any pub which names itself after Maidenhead*, and asks serious questions about Basingstoke's aspirations as a town.  Fair enough Cittie of Yorke in Holborn, can't blame a pub for wanting a York theme, but this felt a step too far.  I'm looking forward to visiting new 2021 GBG entry the Scunny Arms in Luton.  Rubbish effort this, suddenly the Angel's brighter shiny outlook seemed Grade II listed calibre.
*Don't spoil my rant by claiming it's actually named after a Basingstoke born hero called Arthur Maidenhead or something. 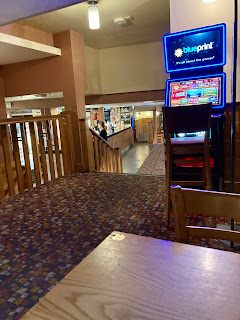 BRAPA days are usually better than this, so as I climbed the not very wooden stairs to Bedfordshire, I was still full of hope for a Monday morning in Andover.
Join me for tales of that tomorrow evening in Part 5.
Si