We were at the halfway mark of a crawl of one of the UK's most underrated pub towns, Rugby, and a mixture of fate and sheer BRAPA ineptitude meant only ONE of the FOUR pubs visited was actually in the Good Beer Guide, despite having SEVEN to aim it.

As we strode around a wet leafy corner towards pub five, I could almost hear fellow pub tickers Taylor and Mackay's voices on the wind chanting "What's it like to see a (GBG) pub?"  Not their catchiest effort, but they tried.

And don't forget, Tom and Father BRAPA were having their own private battle re Tom holding up his 'Allam Out' Hull City banner.  Just to be clear, Dad doesn't feel pro-Allam (Hull City's owners), he just thinks Tom's protest got tired about 5 years ago.  Tom is 2-1 up if you didn't read my previous blog.


Having lost all confidence at my ability to pick a Good Beer Guide pub, I double and triple checked that the Seven Stars, Rugby (1640 / 2857) was actually our second bona fide 'tick' of the day.  Following the insanely good Alexandra was a tough ask, and I think it is for that reason that I felt a bit of a lull here, like I didn't quite FEEL this pub like the other GBG ticks today.  The barman was sprightly, beer seemed astonishingly good, and I conducted a Tom and Dad mediation session following the above skirmish, and we settled into some round armchairs which in Rugby pub terms at least, could be described as 'a bit posh'.  The glass corridor to the Gents, showing off a saucy bit of pretty pub garden was actually my favourite bit of the pub.  When I read "Rugby is televised in the bar", well you understand my confusion, and ultimate disappointment, can't you?   Dad liked this area of town best, and said he wanted to live next door (presumably in the Tyres Centre). 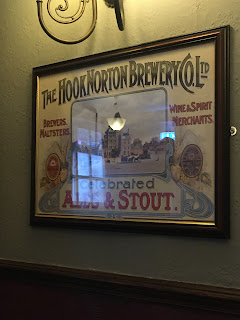 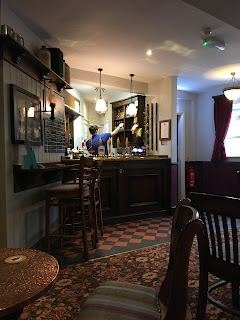 "Ebrietas facit confortavi manus meas" is Rugby's Latin slogan, and it means "Beer makes me strong", that is not only a BRAPA fact but was easy to see why, as we limped on to pub six, I was feeling it a bit by now so had to keep chanting the above .......... 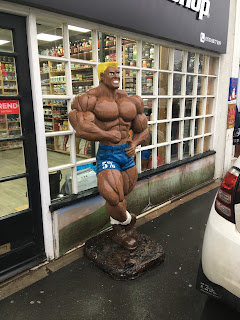 Meanwhile, in the latest round of Dad v Tom, a bit of an anti-climax ....... you can blame my mediation session.

Merchants Inn (1641 / 2858) in some ways, was a return to the form of Squirrel and Alexandra, in my eyes at least, but then, Seven Stars won the local pub of the year last time so what do I know?  This pub had a beautiful almost nautical atmos, stone floors, no nonsense splendour with fire, leading to a big back end which was even cosier.  Tom makes a brilliant beer observation despite his blackcurrant bent, Bushey's of Isle of Man (the punk brewery to Okells Coldplay, if that isn't too harsh, but the lads in Rovers Return Douglas schooled me well) not often seen on the main land, and I'm glad the barmaid was a friendly legend, because my attempts to pronounce it came out more like 'McManaman' and nobody wants that!  Dad meanwhile had strategically plonked himself right at the back of the pub, making him hard to spot but his motives were clear, it was sandwich time, egg and tomato in homemade bread!  Tom was given a sandwich too, which meant he'd achieved honorary Everitt status the lucky boy.  Oh, and I forgot to say thanks and Dad told me I needed to be more polite like Tom!  Oh the shame.  Then a barmaid saw us eating them and said "you shouldn't eat your sandwiches in here but my shift has finished so I don't care .... enjoy!" so we laughed and thanked her.  Sadly, our guards were down now, we were a bit too open, and the guv'nor saw us and gave us a quite brusque telling off!   If ever a pub looked like it didn't do food, it was here, but sometimes you just never can tell.   Great pub nonetheless.

One more pub, the walk which had become a limp, was now a stagger.   We saved this one til last because it seemed to then have the most direct route back to the station.

Dad was having fun with an upside down trolley .......


I took the photo from a nice distance, with little warning, so I could get the pub in full perspective glory, but mainly in the hope Tom and Dad's challenge would finish 2-2.  Didn't want either of them upset at this late stage ....... 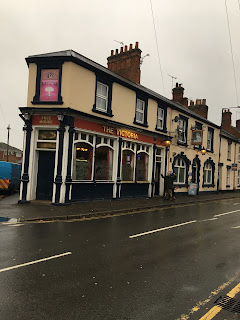 But in a BRAPA exclusive, I can reveal the battle for the 3-2 win was still very much on!  And if we zoom in, Dad celebrates what he thinks is a fantastic victory, but Tom pops up with an injury time winner.......

A late contender for pub of the day, Victoria (1642 / 2859) was another fiercely impressive example of Rugby showcasing its talents.  Martin Taylor had told me this was a particularly good one, and as I got in the Titanic Plum Porter I'd controversially passed over in the Alexandra, and we sat in the gentle loungey hubbub, and I drunkenly purr (slur?) to the other two how much I'm enjoying this.  For any normal pub goer, that'd be that.  Enjoyable non controversial end to the day.  But weirdness tends to follow BRAPA about - I'm definitely lucky/unlucky like that.  I read other pub blogs, and it is the exception rather than the norm that weird stuff goes down.  I don't know how they do it!  Anyway, I've said it before and I'll say it again, no worse armchair football supporter in the country than Liverpool.  From Northallerton to Torquay via Hull, and now Rugby, they just can't help being twats.  It is truly a 'thing'.  Here, Crystal Palace scored and the pub, liking the underdogs (even Palace) of course, apart from one angry hairy little urchin to the left who couldn't understand why people weren't liking HIS team.  Then, VAR disallowed it and he got well cocky, mocking us all.  Dad briefly engaged with him, which was a mistake, but worse was a bald guy on the table to the right being a bit lairy.  HPSU (Hairy Plastic Scouse Urchin) called him a 'Faggot' then it kicked off.  "Oi, don't call me a faggot, you don't know me, do you even know what a faggot is?" "I'll call you a faggot innit mate, ya faggot" squeaked urchin.   I'd not heard so many pub faggot mentions since when Dad contemplated ordering them in Derby's Flowerpot in 2007.  With these verbal volleys of abuse flying over Dad's head, he told me it reminded him of the time I was in York's Three Cranes and a bloke politely asks me "can you just duck down please mate?"  I did, and then he lamped the guy behind me!  Classic times, and what an end to a stunning day out in Rugby, one of my new favourite pub towns ever.

So that was that.  Inevitably, I can't remember much about the first part of the journey home and even sleepwalked off the train at Birmingham International, recovering myself in the nick of time!

And it is crazy to think that as well as GBG listed Crafty Banker, Town & County Club and the Bull at Clifton upon Dunsmore, we have the non listed but presumably very good Raglan, Rugby Tap and probably a couple more!  So I COULD see myself back there in the coming years.  And I don't mind that at all.

See ya tmw night for the latest from County Durham.