Back in County Durham for the third time on a Saturday in the 2019/20 season, and I'm pleased to say it is 'greening' up almost as nicely as Cumbria.  If I could complete it in 2020, that'd be a proper result, but one which would mean I'd have to 'un-ignore' Devon, a terrifying prospect.

It had been my Work Christmas Do the night before (yes, in November), so despite scenes like these where I seemed to be vacantly staring into a BRAPA shaped abyss  .......


..... I was actually feeling fresh and raring to go on a sunny but particularly freezing morning in Bishop Auckland with Father BRAPA.

I almost got to meet Twitter legend Brad Wight, but child illness / wife working (amazing how many children get ill and wives go to work when BRAPA is in town) meant he sadly had to cancel.  There will ALWAYS be a next time (until 2057 when I finally finish the book of course).

Our first of three pubs in the town was a good trek across town, the furthest one out but significantly, an 11am opener, and didn't it look nice?


And I really enjoyed our morning visit to Bay Horse, Bishop Auckland (1643 / 2860) where a friendly barmaid with a runny nose greeted us with a sniff and a cheeky bogey, before pulling a nice pint of 'Hopper' which was thankfully free of any green mucus, which is why local CAMRA so rate this pub - 3.5 on the National Bogey Scoring System.   The front right of the building was the most welcoming, with the sun streaming in and a fantastic old fireplace rumbling away nicely amidst proper pub seating.  Whilst it was hard to imagine the boisterous karaoke style pub the GBG describes, live sport was a big thing, but even the voice of Joe Cole in triplicate learning how to be a pundit couldn't really dampen the atmosphere, and that spoke volumes for this 490 year old gem.  An awkward teenage couple made a brief cameo, let in all the cold air, walked around in a circle, did the same again, stepped over my bag, smiled apologetically, then left.  Some people will do anything for their two minutes of BRAPA fame!

A decent walk, skirting around the outskirts of town, past a one legged old lady, a couple of decorators with whippets, and over a railway line, reminding us we were in the North East, as we came to our second pub ........ 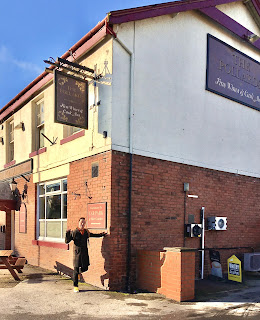 My good friend John Watson had been encouraging me to get this one ticked off for years, being the local of a Sunderland AFC legend and friend of his called Sobs.  The Pollards, Bishop Auckland (1644 / 2861) had quite a timeless, quirky feel for a Marstonsie house, though for once, entering through the 'correct' left hand entrance was a mistake, as we had to do an entire lap of the bar, through a large dining area, and plenty of twilds and families, before finding the ales tucked away in a much more pleasing room on the front right.  Dad waited to get served .... then waited a bit more ..... then a bit more.  A chilled out old dude reading his paper kept on eye out, he'd finished a full pint in the time it took a barman to appear.  It seems we had arrived during some peak lunchtime rush, 'understated chaos' was the buzz phrase in here.  Staff kept shouting things randomly like "The Malibu had gone!", "Did you get the gravy?" and "The fire has gone out ..... the sun has caused a weird chemical reaction lalala!"  They sounded like country music hits on the 70's album you wish you'd never owned.  After a few half mumbled apologies, we finally had a pint and it was a cracking room to sit and drink, but crikey they didn't make it easy.


The really awkward part of the day came next, as we attempted to catch a bus to Spennymoor (we'd be back in Bishop Auckland for BRAPA last orders later on).

It looked easy on paper, but Google Maps reckoned the bus stopped right outside the railway station, which it didn't, then station staff flummoxed Dad by showing him where 'local' buses went from, before we finally located the stop!  Our bus was delayed anyway, so I went for a wee in the rough looking pub behind us called the Kings Head.  I made a point of asking nicely at the bar, the guvnor was fine but I got a few dodgy glances on the way out!   Bus further delayed, Dad now needed a pee, I FINALLY encouraged him to go into the pub, he did, and went a better way avoiding all the punters, but the bus pulled up whilst he was in there, so I was like "noooooooooo!  Dad's having a wee" to this poor lady who didn't ask, then some ditherers got off slowly, and Dad appeared just in the nick of time, bus pass at the ready for a quick swipe on the reader, phew!

Wasn't long til we reach Spenny, as the locals call it.  Apart from Brad Wight, I'd only really heard of it through legendary 80's ref George Courtney, who once "remained unmoved" when my beloved Hull City blatantly handballed it in our own area at home to Port Vale, giving us an unlikely 2-1 win.  Robbie Earle were proper fumin'.

Annoyingly, our first of two pubs was a good walk out of the centre, in a ridiculously inhospitable location at the arse end of a huge scary roundabout that smelt of horses.  One of those "CAMRA is trying to kill BRAPA on purpose" kind of pub locations. 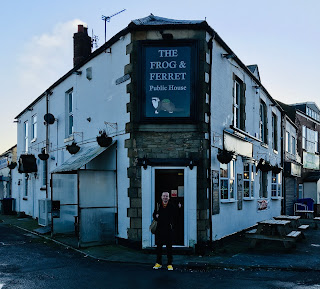 "This better be bluddy worth it!" I think was the thought on both of our lips as we entered the perfectly formed Frog & Ferret, Spennymoor (1645 / 2862) and I admit, I was a bit restless on arrival as we climbed into the raised area to get our pints, but by the end, I'd probably declare this my favourite pub today - isn't it nice when pubs change your mind?!  People looked at us a bit curiously, but in a friendly way, and I noticed at the front of the pub, some locals were making friends with a visiting group from Hull, but try as I might, I couldn't hear what they were actually doing here, unless it was to congratulate Mr Courtney on that late eighties win.  But the welcome was warm from the gaffer, the wood burner was on form, the brick walls were good for resting your head on, Jeff Stelling was jabbering away, and being a free house, I couldn't really think of a pub equivalent to compare it to, which is increasingly rare what with everywhere I visit.  I honestly found it hard to tear myself away to go to next pub, something else which is rare with my BRAPA 'gotta catch 'em all' brain in full ticking mode.

So there we go, halfway through the day.  Now we had to walk back into Spennymoor for the other pub.  There'd be taxi drama, Bishop Auckland completion, a freezing rant, pizza, a cheeky preemptive, and an unlikely village 'tick' still to come.   Join me in Durham 3.2 for that.