Saturday 16th November had been an eventful day so far.  We'd had a shut pub, one opening an hour later than expected, some torrential downpours, and in Hartlepool Headland, one of the most incredible places BRAPA has visited in 2019.

We were due a bit of luck, and we got it, as our new friends in the Fisherman's Arms on the Headland told us that this next pub would actually be closed right now if Hartlepool Utd had a home game today.

The Rat Race Ale House, Hartlepool (1635 / 2852) must hold the record for the sheer volume of no lager, no John Smith's on all four walls.  And some of the quirkiest opening times with times like 12:02pm - 2:15pm and 4:02pm-8:15pm on weekdays.  We were told the owner is a lovely chap, but  has a very definite view on what he wants in his pub, and were told one story about a hen party who got turned away before they'd even got as far as asking for their drinks!  The perils of being a micropub on a mainline station eh?  There was no bar, so we craned our necks to a high up blackboard, whilst five old gents all sat separately blinked at us, half smiles, curious expectation.  I felt like I needed to be decisive in what I wanted!     The bloke was sound as advertised, and disappeared into one of those mystery obscured kitchen areas to get our drinks - 'twas Bournemouthian in this respect, no wonder the 'ahead of his time' Steve Fletcher divided his time between the two towns (he hates hitting the bar!  thanks).  We had to drink quick, as a Billingham train was imminent.  An excitable group from Peterborough managed to act even more like outsiders than us, managing to shoehorn stuff like Nene Valley, 'Whittlesey Straw Bear' and 'Drank this in the Bumble' into nearly every sentence as though I hadn't had enough of the damn place in my Beds/Cambs BRAPA days.   One mystery, does the place have its own toilet? (the above sign suggests so), but both of us failed to find it and ended up using station facilities. 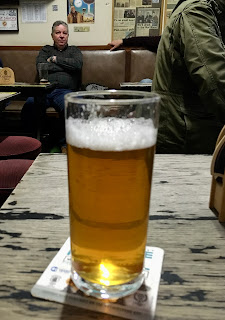 'Twas pitch black by the time we arrived in Billingham and without going into the usual amount of BRAPA oversharing data, when I realised our two pubs were over a mile from the station, i felt like my entire bottom half was going to drop out!

On a less unsavoury note, a return to Billingham was a notable moment for Dad, for if you ask him what his favourite pint in 72 years has been, he will tell you it was a pint of Newcastle Exhibition in a club in Billingham.   Our first port of call, a club.   Sadly, not the same one.

The darkness meant the outdoor photography was an amusing game of pot-luck ......


And then we missed the entrance, meaning the locals sat in the bay windows were laughing at us by the time we finally made it into Billingham Catholic Club (1636 / 2853) which of course was a good start.  At least we didn't have to ring a bell, input a code, get a door released, sign a guestbook, or put an old 50p in a bucket, as you sometimes find in GBG clubs so I guess I should count myself lucky, and our fantastic ale (no idea what it was) was served in a cheerful manner.  This really was a late contender for 'pub' of the day, 11th consecutive year in GBG and the front covers of each GBG were above the bar.   I went to photograph them, a jolly local looked at me curiously, so I told him I was a sucker for this GBG type bollocks and not trying to photograph him in any way, so I was only 50% lying.  Ever been to the Ukrainian Club in Bolton? And ever been to the Firs Club in Codsall?  Good, well imagine these two having a business meeting which was then gatecrashed by Ross Noble and the ghost of Gazza in a pantomime donkey.  That is probably the best way I can describe this joyful club.  Dad was equally impressed, but soon I heard him rummaging in his bag, and realised he had a nosebleed and needed a tissue.  Happens every time we go anywhere vaguely Catholic together, and that my friends is an 87% truthful BRAPA fact.

We carried on walking along the same road until we came to what they call 'Old Billingham', and isn't it annoying when the pub address is Station Road and it is miles from the station?

Crafty Cock, Billingham (1637 / 2854) then to end the night, and a debutant micropub by all accounts enjoying what by now was quite a jumping Saturday evening atmosphere.  Bad start as my 'Dark Side of the Moose' immediately went off but never mind, the Elland was a good replacement and the barmaid / lady business owner of much repute, was fantastic.  Can't remember why, just remember us commenting on how good she was!  We perched into a rare free seat by some krazy kraft kids (no, I don't mean they were on the cheese slices).  Dad is always cautious of 'man-hugging' when he sees groups like this, and although we weren't in Surbiton or Streatham, the threat became very real about half an hour later.  A Welsh dresser by the bogs encouraged people to be 'quirky' with a bunch of over elaborate props, and soon the lads had commandeered the sombreros.  Pure banter.  With the train times just a bit 'off' (or so we thought), we HAD to stay for another, oh dear what a shame, and it could be my imagination but I think Plum Porter had gone on, my mind was going but this was a lively, happy positive way to end what by all accounts, had been a cracker of a day out. 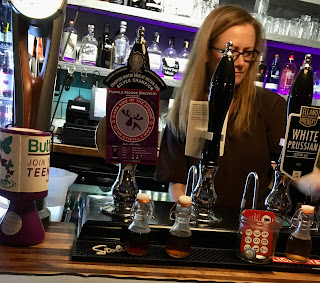 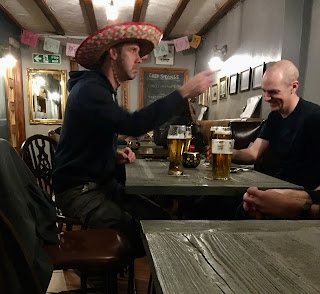 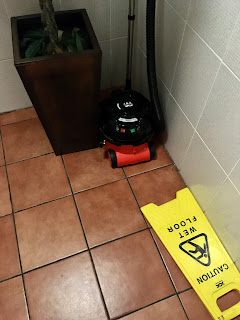 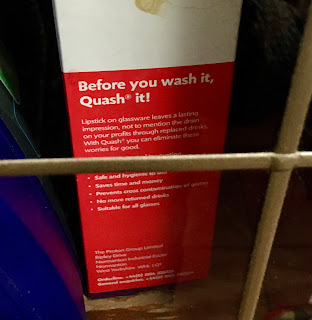 I've actually got a few December pubs to visit now so I'll be back on Sunday to tell you about a very peculiar place in County Durham, and then I'll desperately try and remember any details from my day in Rugby, Warwickshire.

Have a good weekend.