Excitement was mounting as I left one Wetherspoons at Rayners Lane for another at Ruislip Manor.  I say excited, and I'm not talking Neil Shipperley levels of excitement of course, but I was one pub away from completing North London for the first time, which would be my first fully greened 'county' of the 2020 Good Beer Guide.

I used the short tube ride to order a new orange scarf on Amazon, having left my BRAPA stalwart one on a bench in the Queen's Head in Uxbridge.  At least it went out on a high.

Ruislip Manor looked a bit edgier than Ruislip itself, which I did earlier this year when a pretty average micropub was in the Guide and a man shouted at me for not closing a toilet door.  Men lurked and smoked, someone swore at a pavement for having a steep curb, and someone asked me for the time like it was 1980. 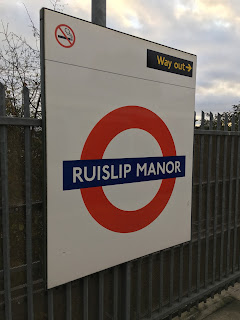 Still, I savoured the moment before entering the pub, doing a bit of hover-lurking myself just to build the anticipation, or was it just that I was waiting for a 90 year old bag lady to shuffle past the pub so I could get a clear photo opportunity? 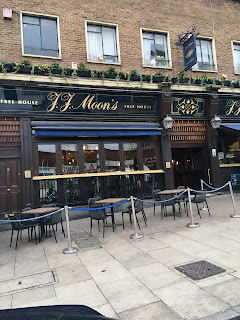 A bit more rugged roughhouse than its Rayners Lane counterpart, there was a real sense of 'life' at J J Moon's, Ruislip Manor (1654 / 2871) which reminded me a bit of the Wrong 'Un in Bexleyheath in terms of nobbly old dudes getting apoplectic at the prospect of horse racing.  The barman seemed a little bit too excited as I scanned the ale pumps and kept an earlier promise to myself, ordering a hard to pronounce Christmas beer which looked a bit less tacky than the Rockin' Rudolph, I'm disappointed to tell you.  "It's Welsh!" squeaks the barman.  "Oh good" I said, for I was unsure how I was supposed to respond to this.  With elaborate fruit machines flickering away in a epileptic-threatening way, the odd mini staircase and the occasional bit of flora and fauna dotted about, it was a bit like being in the posh bit of Coventry's Ricoh Arena before it went bust, with a nod to the Grand Electric Hall in Spennymoor.  Two Fosters ladies watched me with understandable superstition, a chunky Paul Daniels smiled, and the horse lovers kept using my table as a resting place for their Birra Moretti mid-race.  An amusing satisfying Spoons full of life, and North London complete!

If your 'London Underground' game is particularly strong, you might be thinking "Si, how come you did Rayners Lane BEFORE Ruislip Manor when it is closer to King's Cross?

Well, there was method in my madness.  I still had capacity for two pubs, didn't trust any of my remaining Central London trio this close to Christmas, so wanted to 'keep west', and worked out I could walk quite easily to Ruislip Gardens from here, where I could join up to the Central line going south.

After all, it seemed sort of wrong having a very 'green' North & West London, but a non-green Greenford ....... 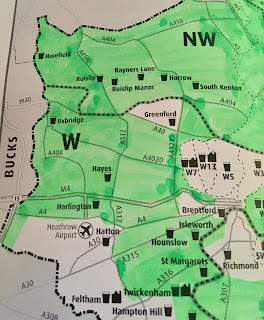 Fatigue was starting to hit earlier than I'd have liked, I suspect my Halifax evening was catching up with me, but there's always someone in a worse state than you .......


The light was fading now, and Dad was reporting that Hull City were snatching victory from the hands of defeat at home to Stoke so I strode towards pub five with a new found energy, vim, vigour and purpose ...... 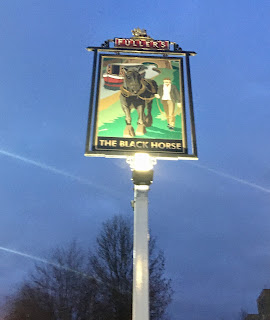 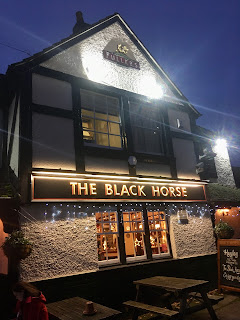 For all the solid, sturdy, neatness of this obviously well run Fullers house, I still felt there was something slightly flakey about Black Horse, Greenford (1655 / 2872) and I want to offer you a better explanation than "well, West London, innit?" but I'm not sure I can!  I'd already been peeved when trying to order one of those 'Coming Soon' beers, only to have my wings clipped by the 58 tartan-shirted barmaids presiding over a London Pride v ESB range.  Still, you cannot deny the Pride was drinking well, as us bitter experts say(!) and I should probably have never tried to go off-piste in the first place.  On-piste, or at least 'on the piss' were the three 'Sky Sports Ladz' watching the scores coming through courtesy of BRAPA regular, Jeff Stelling, but I'd already suspected they lacked the 'menace' of say an Atherton, Wigan or Stalybridge counterpart, when some food arrived, provoking a five minute discussion on the virtues of red cabbage.  Do these Londoners realise what stereotypes they can be?  I should have probably interjected that in Germany, they call it blaukraut in the south but rotkohl in the north (thanks Ludi!) but I didn't want to embarrass them.  With SSEB (Sky Sports Errol Brown) doing laps of the pub and muttering amusing football cliches nervously as the final whistles rang around the country, I left my right leg hanging out and a barmaid nearly tripped, called me 'darling', so I made a swift exit before I did any more damage.


One more pub to go then, and you could tell my mind was starting to get sozzled as I started to get my Ealing's mixed up!

I'd been patting myself on the back for getting to Ealing Broadway via North Acton, but the pub I wanted was actually at WEST Ealing, which I couldn't see on the Tube, possibly because it isn't, a good 20 minute walk away.  Oh well, at least the chilly dark walk sobered me up a bit. 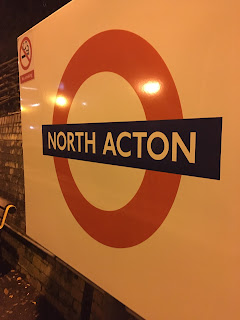 And I'd actually been intrigued by what I'd read about this next pub.  The locals call it Dracula's Castle because of the gothic outlook, and you can see why, but you'll have to read Martin Taylor's recent blog to see a good photo cos (a) it was dark and (b) I accidentally entered through the tradesman's entrance, past the kitchens ........


But fear not, for another strange quirk of Drayton Court Hotel, West Ealing (1656 / 2873) was that Ho Chi Minh used to work in the kitchens here!  That is probably a BRAPA style fact, but it presumably draws in a few more curious punters.  So, I can tell you are expecting quite an interesting 'tick' after all this, so I'm sad to tell you it was dull as dishwater.  The main bar was sparse, the few seats dotted around the sides were all taken, the other rooms all restaurants and the Ghost Ship was 'coming soon' (nearly fooled me again!) so I smashed down a pint of Tribute as I'd just had a Pride (the only other ale on).  'Twas decent stuff up to a point.    All I could do was perch at the bar, which at least allowed me to witness the sheer panic on an old Swansea man's face as his card was declined, which he manfully told the staff was all the fault of London prices!  Still, he wasn't eager to go back to his table and tell his wife she'd have to pay, so he lingered and we had a bit of chat about Swansea pubs No Sign Bar, Queen's Hotel and the Potters Wheel 'Spoons, and it was clear we were both delighted to be able to have this brief chat in these trying circumstances!  I realised I'd been here 33 minutes, long enough for any man. beast or twild.  Time to goooooo.

I left by the front in one vain last attempt to capture the Gothic Dracula's Castle .......


Presumably, the journey back was nice and straightforward.  I DID get a seat this time, and the Sunderland fans were in remarkable voice for a team who'd lost at the Gills, they must be getting used to it.

Join me tomorrow for tales from the Lancs/Scouse border.