7th April 2018, and I was careering around the Cambridgeshire countryside with this amusing chap called "Martin Taylor" and he says "Ya know what Soi?" and I say "What do I know Martin?" and he replies "Halifax is the most underrated pub town in the UK" and ya know what, in that moment amongst the windmills, dog walkers and six fingered villagers with zero manners and sticks up their arses, Martin was right. I replied "Martin, you are roight".   With the village of Ashley in sight, he asks "Is it a roight here?  I've absolutely no idea".  Neither did I.  Ask Google Maps.

And that sets the scene for a drizzly Friday night in West Yorkshire.  I've got pubs to do.  Crazy Twitter legends want to meet me, this could be fun but hopefully not the same kind of "fun" as Stalybridge/Greenfield/Mossley back in the summer. 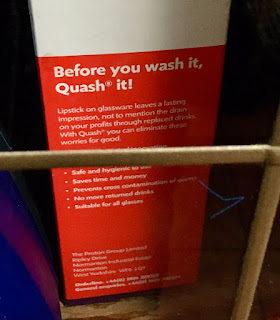 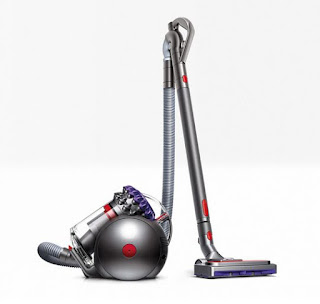 Halifax is a ridiculous place for the 'ticker'.  So many options in the last three years, and the fact that neighbouring Sowerby Bridge has declined from approx SIX pubs in recent GBG's to just TWO shows how much the 'Fax is monopolising proceedings.

So to get a Sowbs tick in was a rare recent treat ...... if you can ignore how similar it is to the Pizza-centric Firehouse and how Puzzle Hall really really really needs to make the anticipated comeback they'll have you believe ........ 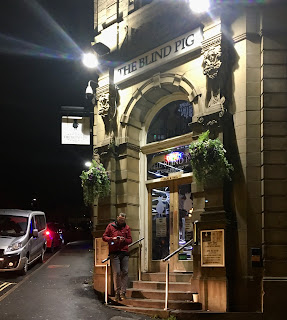 Blind Pig, Sowerby Bridge (1649 / 2866) was better than I'd expected on at least three counts, so gotta take that as a 'win'.  Firstly, I'd been expecting some tiny chilly micro thing and it was actually a bar of former Bank proportions, which meant warmth and depth, and you've gotta like your pubs warm and deep.  Not only was the bank a 'Bank' but turns out it was a former Yorkshire Bank, the best type of former bank.  And then you had Twitter friend Quosh, you might know him as Alex, propping up the bar in his burglar's hat with lovely smile and cute white teeth.  An illuminated fluorescent green bar underneath the bar made me think 'BRAPA highlighter pen' and the barman was such a fucked up  ball of joy, i felt like he'd served me in several other BRAPA pubs from Par to Berwick, but Quosh asked him, and it seems not.  The ale, Sonnet Raven was a smooth stout of glorious proportions, it was a bit like having Cary Grant on your tongue (that is why Untappd banned me) and even though this pub will not live long in the memory, there'll just be enough in my brain to make me think "hmmm, Blind Pig, it was different to the Hog's Head".


Time to take the short train ride from Sowerby Bridge to Halifax, but as we entered the station, Quosh decides he needs a wee.  What should he do?

Well, observing the WWBD(IIN?) 'What Would BRAPA Do (If In Newark?)' rule seems to be the best course of action here .......

After a short train ride, Quosh uses the knowledge passed down to him by our forthcoming BRAPA visitor, Chris Dyson, to not only navigate us perfectly to the second and final 'tick' of the night, but also give me a lot of local knowledge on the way, though the 'not quite getting run down by on coming traffic' was the bit I most enjoyed. 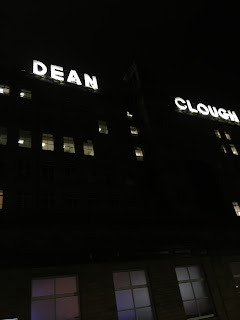 Dean Clough is not just the untalented footballer relative that Brian and Nigel shoved in the East Midlands basement, but this huge quite awe-inspiring mill complex, and as someone who loved his Industrial Revolution GCSE's, I found the whole thing quite interesting.

But what about the pub standing at the foot of the complex like a modest footnote to the past?   I told Quosh to pose but he's no Bernard Everitt or Tom Irvin, lacked an Allam Out poster, and fucked off inside to the bar like a 'normal' person......


I caught up with Quosh at the overly bright bar of Stod Fold (1650 / 2867) and was expecting the 'golden' to taste like piss, but it was actually a really nice drop and the weird pump clips which looked like lumps of wood added a bit of class to a bar which really needed a bit more.  A cacophony of shrieking females and office dwellers in cheap suits didn't do much for the atmosphere.  It seemed vaguely ironic that Quosh had told me Dean Clough once produced the most carpet in the world, and how this place could have done with a carpet to soften the acoustics.  The atmos could only be saved by the arrival of Halifax pub legend Chris Dyson, who despite being gentle and calm, can still separate the weak from the chavs, with minimal effort.  I tried to like this place, but the bright lights, unisex loos and feeling that whether this place was quiet or loud, the atmosphere would still struggle, made me realise it wasn't likely to push Three Pigeons, Big Six, Grayston Unity or even the bloody Alexandra for 'Fax Pub of the Century, but you watch me be wrong now!   Bad news though, last time me and Chris Dyson were in a pub together (Donkeystone, Greenfield), it closed down despite being v.good, so watch this space!


Funny really, the BRAPA bit of the night was done.  And yet now, I could enjoy myself!

Chris Dyson had preemptives in mind, and if Chris didn't know, who would?  We walked back towards the centre, I saw a nice monument, where a Quosh girlfriend once caught a Pokemon just up the street from here ...... 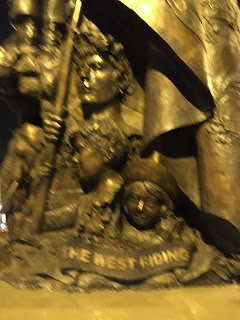 Our first of two preemptives, was my favourite pub of the night.  I'm not sure why, maybe the way the gents posed outside ........

Kobenhavn, Halifax must have a great GBG chance in the coming years, it had a class and an elegance you don't often find in these modern drinkers, and looking back, I suspect it was an attempt at some Scandinavian level of decor , which in my mind, I could only compare to L**ds BHS visits with my Mum and Grandma for a scone and a cup of coffee circa 1986 and then a dabble in the play area.  No play area here, but when I told Quosh I had concerns over any beer called 'Green Butt Skunk DIPA' he was less than sympathetic!  I won't tell you his reply, you can guess.   I realised we'd not highlighted the Stod Fold in green, so Chris got to do the honours, the Low & Behold by Vocation was a scintillating pint, and overall, you've gotta say this pub stands up really well, even in the strong competition which is the Halifax Machine of fantastic new real ale venues. 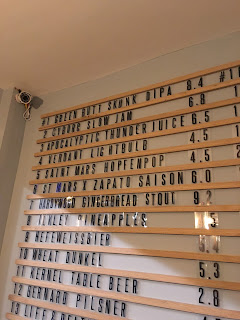 Not far to our final pub, the guys stopped briefly to enjoy a bit of 'Fax culture ....... 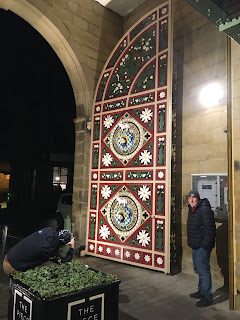 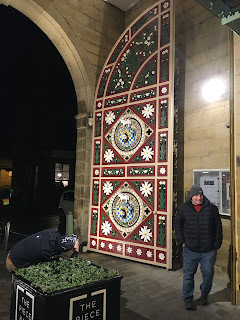 Last one then, and here we are following a big group of folk in ...... 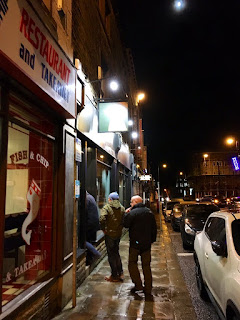 Meandering Bear, Halifax didn't quite do it for me in the same way Kobenhavn did, but not the pub's fault it was ridiculously popular on this Friday night and space was at such a premium, but then again, the pub shape and layout just wasn't as conducive to a golden preemptive experience.  A barmaid served us without really paying attention, and when Quosh and I started admiring the lovely flooring in the main bar, a strange young woman tried to make us stop blocking the bar area by directing us elsewhere, but then didn't stand at the bar herself.  In any case, I was taken off to the right where a local poet had written a brilliant piece on the legend of the Meandering Bear.  I won't spoil the bits I can actually remember, but it is definitely worth a visit to read this.  Being a local legend, Chris was bumping into his admirers left, right and centre though being modest, he'd never admit it!  He introduced us to the owner, who I warmed to, really nice chap and you've got to say, I bet this is a cracker of a pub on a nice peaceful Tuesday afternoon in Feb (IF it opens Tues afternoons of course!  Though I guess even more peaceful if it doesn't!) 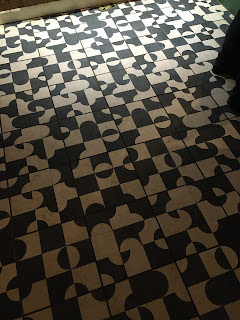 We even had time for a BRAPA re-visit to the Square Chapel Cafe Bar thing, which I enjoyed a lot more this time around rather than the clamour of a Saturday afternoon, which is exactly why Meandering Bear deserves the benefit of the doubt.

A really good night, and if you have doubts about meeting your Twitter heroes, Quosh and Chris are living, breathing proof of the kind of friends you can make.  Top chaps.  But no time to linger, I had to get back to York quicksticks cos I had an early appointment with North London the following morning.