We have just witnessed the best May in BRAPA history, with 34 new pubs visited easily beating the 26 I did in 2015.  The average now stands at 25.4, proof it is still one of the trickier months of the year.

With no time off work, it was a case of 'creative double bank holiday planning' to allow me achieve this.  With an overall year end target of 400 nicely on track, keeping above 30 a month on average is imperative.

So what have been the highlights then?  Three pubs I'd like to put forward into the 'year end mix' are as follows:


Plenty more enjoyable ones, but I have to admit there's been a fair amount of dross this month (not one of those where I was 'spoilt for choice' picking the best ones), but there was only one really dreadful one and that was the Waterside in Leigh , and considering it was up against 'pubs' like Powderkeg near Clapham Junction, that is almost an achievement in itself!


Some great days & nights out though that'll live long in the mind.  My birthday at Brentford was a wonderful day.  Part 2 of my Cambs travels alongside Martin Taylor was even more enjoyable than the first one, and once again am so grateful to him for taxiing me around, pet crematoriums or not.


Finishing Cheshire was a great feeling, my two evening Stockport pubs as good as any 'fifth' / 'sixth' pub of the day duo I've done all year as I was strangely sober.  Meeting the Southworth brothers (over from the U.S of A.) in some quality L**ds establishments (and the Angel) was a great evening too, I even took my GBG along for a show & tell!


But the overall monthly highlight was my evening in Oldham & Delph, a bizarre maniacal mix of joy, despair, heavy rain and brass bands from start to finish. 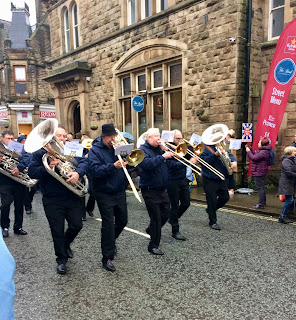 I hope you have your seatbelts on because tomorrow marks the start of the BRAPA Summer Festival.  Two weeks of pubbing holiday mayhem! 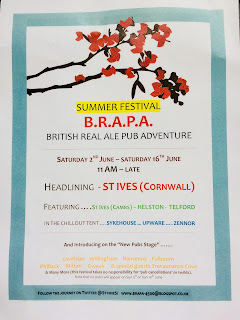 We kick off with Cambs III (a bit further north this time) before heading down to Cornwall for some of those 'hard to reach' pubs stuck around the toilet bowl like picturesque limescale in amazing sounding places like Gweek, Trevaunance Cove, Mousehole ('Muzzle') and Gwithian.  I am VERY excited.

And after completing South Yorkshire with Daddy BRAPA, we'll be back down in Cambs for Part IV including the fair city of Cambridge itself.

Phew!  Back for the start of the World Cup, I was so Cambridgeshire focused I entered the opening fixture incorrectly into my phone calendar, but it amused me so I've kept it..... 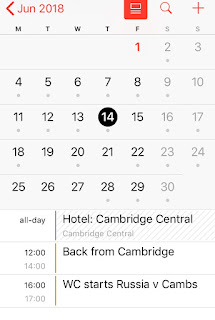 And then we have a nice slice of West Midlands pie to complete the holiday.  If you see me on Sunday 17th or Monday 18th June, send for a new liver, or just inject me with turmeric.

All this means I am wondering whether I can break my all time record of 56 pubs in a month, for whilst I'll be taking it a lot steadier 17th-30th, a smattering more will be had in northern towns beginning with S. 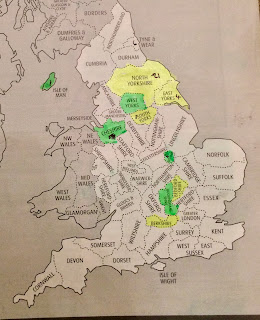 And now for the science (boring) bit.

Three months and counting until the new GBG comes out, and inevitably I have about one eighth of my right eye (the bad one) on the end figure, and my progression towards the completion of key counties.  I feel like Jon Snow on election night, only more fun.

With Cheshire fallen in the west (sounds like I performed a military style coup), Isle of Man as good as done, Rutland completed back in March, and West Yorkshire re-mopped up some time ago, not forgetting Buckinghamshire of course, things are fitting into place nicely for 2017/18 ticking season.

Cambs is key now, Cornwall soldiers on once a year, I have one left in South Yorks, one left in Central London, and six in Tyne and Wear.  I want these latter three to go by end August.

I'm making really good progress with Greater Manchester and Merseyside but still too much to do to be finished before end of August.  Derbyshire will come into focus as Cheshire's replacement probably as the summer draws to a close and the football season begins.

I can't be arsed with East Yorkshire's remaining quarter for now (two will fall into the sea before 2020 anyway), North Yorkshire similar but have some vague summery plans to get to the likes of Whitby before the next GBG comes out.

Essex will be the natural successor to Cambs but let us not worry about that any time soon!  Looks like the Cumbria or Devon of the South East from what I can make out.  Ugh.  I'll just focus on my 'emotional' return to Saffron Walden and pretends places like Andrewsfield Airfield and Steeple Bumhole don't exist.

In terms of numbers, I opened the BRAPA year at 1236, and despite losing 170, I've clawed back and beyond up to 1372 at the time of writing so really looking to get in that 1475-1500 region when the next cross ticking takes place.   Key is to put as much distance between 1236 and myself as possible!