I thought I would enjoy it, what with it having two GBG ticks that both sound lovely from the descriptions, but it just didn't leave an imprint on my conscience at all.  It was a bit like a baby mouse, taking its first tentative steps in the Sahara Desert.  That is how much of an imprint it made on me.  If that makes sense.

I think this might be because it is still 'Fenlandy' enough to be inbred and standoffish, but it is trying to be some continental relaxed riverside haven, so it ends up diluting what makes Chatteris 'special' without ever managing to come close to being the Ely it craves.  End result, a middly-twiddly place devoid of charm, charisma and character.

I stepped off the 33 bus from Chatteris and despite my annoying phone freezing, found the first pub looking old and thatched in a nice location along the river.  A few seats outside had outdoor drinkers and I was thinking 'oh gosh how lovely' or something fairly positive at least ...... 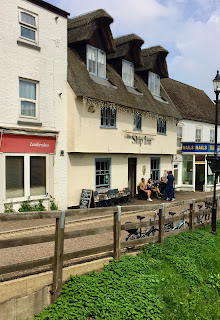 The first warning signs I guess, were the outdoor drinkers properly giving me the evils as I walked in.  I tried to say 'hello' but they didn't respond.  Inside, it felt like a pretty calming wooden floored relaxed modern style bar, quite dull, I certainly wasn't getting any of the 'Grade II listed, built in 1680, carved beam' vibe that the GBG witters on about.  It felt more to me like it was built in 1985 and opened as a Wham Tribute Funhouse (Pat Sharp cutting the ribbon with George Michael and Margaret Thatcher) before realising since about 2015 that this isn't what people want anymore and trying to be a bit more demure, relaunching as 'the Ship' (excuse the pun) with Jeremy Corbyn and the ghost of Oliver Cromwell cutting the new ribbon .  The folk inside were joyless, never outside Central London pubbisphere have I seen a more miserable looking bunch of crones.  If you can't be happy in a pub, then you can't be happy anywhere.  My favourite bit was the corridor to the toilets, so delightfully thin and winding that I spent much of my time down here, seeing if I could propel myself to the loo without my feet touching the floor, Ninja Warrior style, but pumpclips got in the way, as has never happened on Ninja Warrior UK to my knowledge.  One of those where I wonder if I'd enjoy it more if I returned, but then I think to myself, don't be silly. 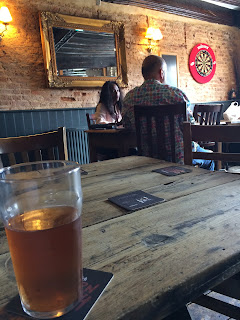 On the upside, my next pub was going out of town towards the backstreets, and nothing beats a backstreet pub.  Problem is my phone didn't want me to go, so I walked in totally the wrong direction, in the baking heat, not improving my mood.

When I did get my bearings, March became like that scene near the beginning of Shaun of the Dead where he goes out for his morning milk and paper, totally oblivious to the fact people have already become zombies cos the difference from their normal behaviour is hard to distinguish.

Cos my phone froze, I didn't get an outdoor photo.  But it looked like you are imagining in your mind right now, and here's a view of what it might  look like approaching it on a misty winter's morn if you were in somewhere nicer than March. 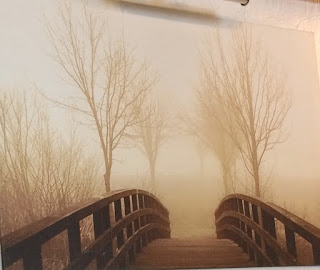 I remember walking in, thinking 'ahhhh backstreet boozer fun' this is more like it, beer a lot better quality and I walked down some steps to the left, nodded at the only other customer in the pub (this was mid afternoon on a Saturday in June for heaven's sake!) and he actually acknowledged me with a curt nod so I debated whether to kiss him (in a manly way) out of pure joy but thought better of it, sat in the corner, stared at the magnificent carpet til I drifted into a trance, and that was it.

Good news, March has a train station or a railway station of you want to be pedantic, and I'm sure you are, but thanks for reading and sorry for this ongoing horrific assault on your mind.

"I was glad to be in Peterborough" (said no one, ever) but today, after March, it was true, and there was time to squeeze in one more pub before the train home to York.  I'd done the majority, so had to venture away from town, past that over-rated Barge contraption, feeling a little bit happier with life now, when I came to one of the two pubs I still had to do in this area ...... 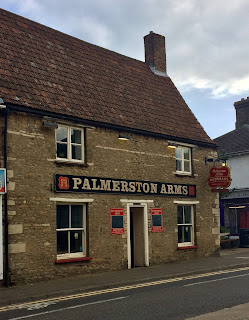 From the moment I opened the door, stepped inside, and was greeted by a series of curious but friendly looking baldies, I knew normal service was resumed and I was back in a proper pub in a proper place.  Having said that, this was a SERIOUS ale drinkers pub, amusing but with it comes a pressure, and that is when you go to the bar, all eyes are on you as you know you are going to be judged for eternity for what beer you are about to select as a hush descended and I pondered.  "What style of beer do you like?" came the inevitable question from mine friendly host who impressed throughout, bald of course so his regulars didn't feel out of place.   He explained the beers went along the bar , the lighter ones on the left and the dark ones on the right.  When I admitted "I like them all, it depends on my mood", someone asked 'what's your mood?' but I decided even this ale emporium didn't have a "glad to be outta March" style of beer, so I got something by Batemans because of the sign outside the pub.  Two men were discussing whether the hop profile of Oakham had changed (I nodded wisely, frowned and laughed to cover all bases, no idea what it all meant) and two other men were having an in-joke with the barman about the amount of Dukeries drunk on a previous visit, so I chuckled like someone who's been in that situation (I hadn't).  It was all very beery, bit geeky, but a really nice pub and I stayed for another (unwise move) cos I have to have Green Devil if I see it, oooops, very much the Spingo Special of North Cambs.


It was time to stagger off back to York, six more Cambridgeshire pubs done.  Seems to be a bit of hit & miss county for pubs so far, but I'm here from Mon 11th-Thu 14th June and early days and all that, so it might become the new West Yorkshire by the time I'm finished with any luck.