I'd become a bit complacent after miles of walking in Cornwall down narrow lanes.  After all, boring flat Cambridgehire should be simple by comparison, right?  Ignore the Dubai-esque temperatures, and a trio of pubs south of the city would be easy.  Surely?

Buoyed by a promising start with RM at the Flying Pig, I checked in to the most expensive Travelodge in history (with the thinnest bed sheets) and marched to Grantchester, which although took me on a picturesque river walk, was blighted by thoughts of Robson Green and the sight of loud picnicking students, a dangerous combination if you are striving for robust mental health.

A little cut through near the river took me in through the back of the pub garden, which of course, is no good for BRAPA cos I had to walk round to the front of the pub for the 'official' photo: 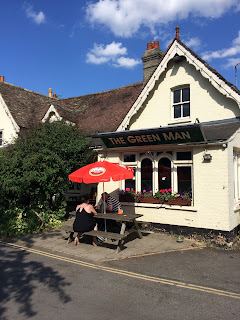 And the abiding memory here was the full scale stand off between students and locals.  You could almost split it 50/50.  If the back garden was full of young ladies with ridiculous shades and floral prints not fashionable since Laura Ashley was a young whipperslapper, I almost wasn't allowed in the front by a selection of gurning beer guts whose attitude to me seemed to be "don't move for him, he ain't over the age of 60 or have a logo on his t-shirt saying something like 'real ale makes men like me proper sexy'".  At the bar, it was obvious they were going for the bar blocking intimidation tactics, but 2,144 pubs into the challenge, I'm too long in the tooth for such bullshit so dug my elbows in.  The barman sounded Irish, but could've been Canadian or American (it's all the same isn't it?) and was very lively.  So I was sat there, taking a few 'mood' photos to give you all a feel for the place, and noticed something was missing - I'd left my pint on the bar!  I'd been sat down about 5 minutes, how strong was that Flying Pig beer?  I went back and exclaimed "I've left my pint here!" and the locals and barman were all like "hahaha YES YOU HAVE", so I'd been sat just behind in the corner, which they knew full well, and no one thought to mention this to me?  Weirdos.  I smuggled a cucumber and cheese sandwich in protest from my bag, and although 'Combat Trousers Ray Wilkins' gave me a couple of highly judgey stares, I carried on regardless.  Bit of a murmur as some hot student girls (due to the weather I mean!) wandered in and tried queuing at the bar like people who'd never been in a pub before.  I then spied one of the blokes had been in Flying Pig, small world, but not one of the legends specifically mentioned in yesterday's blog.  When Waistcoated Roy Hodgson decided to leave, the whole pub started to disperse, but this was just after a bloke had started telling everyone about an Essex Minor Counties Cricket match he'd been to yesterday.  Coincidence?  Probably not.


If it was a tricky walk out of Cambridge to Grantchester, I was absolutely cream crackered and red faced by the time I'd fought my way through a place amusingly called Trumpington which was a bit of a let down to be honest.  I then skirted perilously close to my sisters birthplace, Addenbrookes Hospital, for todays third pub, a "new build" in a shiny little estate ...... 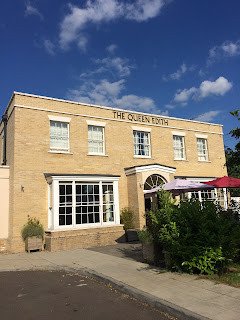 With my beetroot face and all the puffing and panting, I don't know if the friendly barmaid (a star from the start) knew whether to feel sorry for me or phone the sex offenders helpline as I walked in and ordered a pint of something Milton, so it obviously had a stupid unpronounceable name.  Ah, Milton pubs, only my third I believe but I'm already noticing a theme - huge empty spaces that they don't really know how to fill and board/card games too difficult for your average punter.  I'm a way off a 'Milton Pubs Bingo Card' but it is a start.  I went to rinse my face under the cold tap, and in the side room, a group of women were having a meeting for the village fete or something.  The meeting minutes taker (possibly called Joyce) was utterly hopeless.  "Is this happening in July?" she asked (probably about some jam making event), "NO, IT IS HAPPENING IN JUNE AND IT IS JUNE NOW!" scolded another (possibly called June and that's where the confusion lay .... I'm making these names up).  I then nearly collided into the pub chef, a kind of Cambs Kevin Bridges, without the 50 a day deep fried Mars Bar habit, who was impressed a man next to me had finished eating his fish & chips in very quick time.  "You were quick with that!" says CKB.  The man didn't reply, but placed an empty crisp packet carefully across the plate for added impressiveness!  It was a small moment, but a highlight of the day / year.  A builder came in, ordered his lager, then sneezed everywhere.  Used to happen to me in my 'Corrs Light' days that we don't discuss.  But then I noticed the amount of dust hanging from the bottom of every chair and table.  New build pub?  If you saw this in a National Inventory pub, they'd claim they were cobwebs from 1743.  So, quite a nice pub, lacked a bit of comfort (in the circs, I was crying out for some bench seating or a nice armchair), good pint, friendly staff, can't ask for too much more can you?


One more back breaking walk to go!  Out to a village called Fulbourn where Martin Taylor had written a positive blog about (clue - it didn't feature a micropub) a few weeks ago so I thought a nice way to bring up a landmark moment, my 1400th current GBG pub.

I needed a wee and was just to pop in a hedge when a woman with a fast walking twog started following me, ALL the way to the pub entrance so I had to hang on.  I was already sweating, aching legs, coughing up phlegmy Milton dregs.  I don't think I've ever been so dishevelled entering a pub ..... see pic at top of this blog!

Well, this was a very amusing lively pub, and could've perhaps been even more so if I'd joined the boisterous locals in the left hand bar, but perhaps I was right to sit in the slightly more foodie right for sheer comedy value.  A food snob (and I mean a RIDICULOUS food snob) was foodsplaining to a bored Andy Hamilton type when I walked in, and with lines like "you reduce the syrup, pan fry the chicken ..." to a bloke who looked like he'd just grasped using a microwave, well he'd have probably got a punch in the face if he'd said this in Barnsley 'Spoons.  Insane.  It sparked a 'Northern' reaction in me, for when our barman (Hugo, who I thought was the dog at first!) asked if I wanted anything else to accompany my pint of Oakham Citra, I barked "NOWT ELSE" and scared myself.  Eee by gum.  Two posh Judy Murrays edged along the bench to afford me more room to sit down, though looking back, the state of me and probably the smell had caused them to flee.  I read about 'Swift Awareness Week' on a beermat, and realised something was nuzzling my foot.  It was a dog, belonging to the young couple dining in the corner.  "Aaaah he likes you!" said the girl, not knowing I had a couple of dangerously warm sausage rolls in my bag I hadn't got round to eating, now harbouring all sorts of e-coli loveliness.  I did chuck them away later.  But even this nice couple were far from normal.  "Poached eggs go somewhere else entirely" blurted out the young bloke, pointing at his back end.  And at the bar, he asked for a gin and tonic with "an ice & a slice!"  As if a customer would say that with no irony.  Shameful.  "Gin & Tonic is a girls drink!" laughed Hugo, but I never got to see what carnage this comment caused as my bus was due to 30 seconds across the road so I made a run for it!


I needn't have worried, the bus was delayed so I said a little prayer for my liver at the village shrine: 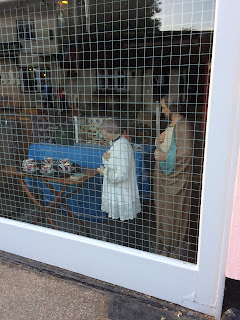 But I got myself back to the Travelodge in decent time, as I had an exciting 4 pub early morning planned.  Ugh.  I think I'd taken too much pubbing on over this 2 week break but no turning back now.