It was about a three mile walk from Porthallow to Manaccan, between what must be two of the hardest pubs to get to in the entire Good Beer Guide.  Not enough travel bloggers have done this walk (I'm not saying I'm better than them, but I am), and I was in the bowels of the Lizard just glad I saw a grand total of zero vehicles on these narrow country lanes.

At least Mudgeon farm raised my spirits slightly, as I struggled in the heat.  I didn't linger, I can only imagine what the farmer who resides here would be like!


Another reason I couldn't linger was the mid afternoon 3pm closing time.  It was getting on for 2pm, and I'd absolutely die there and then if I arrived to find a closed pub.

I arrived at what I believed was Manaccan, but couldn't be sure.  Crossed a river that seemed to be running backwards, and saw an ancient tree growing from an ancient church.  Time stood still, sheep danced in formation, a toothless old woman dragged her brittle frame down the street.  Ever seen the film Labyrinth?  It was a bit like that but without David Bowie being an evil nobhead.

Eventually I found a lovely thatched building that looked like it could be a pub, so I hovered, and a man with an element of the 'Stunted Jonathan Greening' (not as amazing as 'Sexual Jonathan Greening' from Blackpool, but that is a story for another day) saw me photographing the pub and dragged me inside ......

Yes, SJG2 was a brilliant bloke, I think he'd have dragged me inside even if I'd had no intention of visiting the pub, but why else would a stranger come to Manaccan?  He gave a properly rehearsed almost theatrical spiel of food, pub history, lagers, 'craft' ales and eventually the handpulls, and the barmaid was looking as bewildered as me!  He disappeared as soon as I ordered a cask ale (always the way) so I says to her "he's good innie?" but she just looked 100% focused on the job of pulling my pint, which made sense because she was new and still learning her trade.  To the right, a gaggle of relaxed tanned locals (one with disturbingly tight pink shorts) were having a lazy afternoon pre-closure pint or seven.  SJG2 returned with a query for the masses as I hid in the corner and tried to be invisible ..... but in here, well you'd have more chance of achieving invisibility in a Teesside micropub!  "I've got a mate who wants a boat storing .... undercover ..... it has an engine!" he explained in what suddenly became a very West Yorkshire accent.  SJG2, who was a bit of a live wire, disappeared for the final 20 mins, leaving the barmaid in charge on her own for the first time ever.  She seemed panicky at the prospect, but jeez even I could have a go at running this pub for 20 mins on a Tuesday from 2:40pm-3pm.  The locals ordering 'last orders' drinks helpfully told her what to key into the till, presumably so they could get their pints for free.  "I don't like my nails" she complained, struggling to hit the correct buttons.  "Well, I don't like foreigners but we've all got 'em!" replied a local in one of the quotes of my Cornish holiday (he probably meant anyone not from Manaccan to be fair!)  Meanwhile, I had my own query.  "How far to Gweek?"  Well the barmaid guessed three miles, tight pink shorts said 11, but our foreigner lover got it right with his estimation of 7.  "SEVEN?  UGH" I whined .... "Well, when I'm finally sat in there with my pint of Bass, I'll raise a toast to you all!" I concluded, to which they all actually laughed, even though it made little sense, like so much of Manaccan.


And that seven mile walk was the most knackering painful part of the holiday.  At least we could find solace in the 'interesting stat' that with 24 appearances in the GBG, the New Inn was a valuable tick, even though you have to go back to 2006 for it's only other post-Millennium appearance, and 1997 before that ..... sorry am I boring you yet?

After a couple of wrong turnings, I asked two men chatting over a tractor if I was getting close.  "Arrrrrrr, only 20 minutes from 'ere ..... I might see you in there for a pint ARRRHAHA" said the helpful non-deaf one.

45 minutes later, I finally found it and braced myself for entry.  But not before a lame jokey photo ....

I half expected to find that farmer propping up the bar asking what took me so long, but just as good was a jolly bloke who noted my absolute state of mental and physical exhaustion.  The Bass was on so I could keep my promise to the New Inn locals, and the reason I was so aware of this was I'd read that nice Ian Thurman's Bass directory and it appealed to me.  Not been a huge fan of Bass until my recent trip to Burton-on-Trent, never found a well kept pint of it in York or L**ds or Hull and had it in a tiny canalside village called Zouch once and it was very limp there, but not a GBG pub.  Even in Dolphin in Plymouth back in the day, never found it that amazing.  But here we were, and it was the BEST YET.  Having said that, in the knackered state I was, even a Greene King IPA would've probably been rated as 'rather refreshing'.  Reason I'm rabbiting on like a beer bore is I had little to say about the pub up to this point, pleasant but a bit boring after the last three.  The barman tried to give my change to a jolly / obnoxious bloke at the bar.  "That's why I stand at the bar and chat to everyone" he confided "because he always gives ME everyone's change!"  Interesting tactic.  I sat behind him but he later turned around to ask how I was enjoying my Bass.  "Really good" I said, to which he replied "Good shout, I told ya!" which he definitely didn't as I'd decided what I was having about 3 days before!  As a bit of Chris De Burgh added to the slightly mediocre atmosphere, a nice relaxing sense of well being at having ticked off some really difficult pubs swept over me, and things improved.  A pinstripe trousered Bill Werbeniuk impressed a lady, two old women argued about who was going to pay for their drinks which felt very Father Ted, there was an angry chat about royal baby names being too German, and one of the pool players did a poo and didn't flush.   A perfect conclusion.


There were two schools of thought as to what I should do next ..... cut my losses and go back to my Premier Inn, via Penzance, with Porthleven potential.  Or carry on walking for another 2.5 miles up the road towards Nancenoy for another ridiculously remote pub.

I went for the latter, after all Bass gives you life (well that's probably what a certain M.Taylor would tell you) and I was feeling refreshed and ready to go, even if time was ticking on by now.

Down some more winding dark country lanes, a bit more traffic but I simply swatted them away like Cornish flies, and an hour or so later, signs started appearing.


And with 27 GBG entries, the Trengilly Wartha Inn is the 7th most commonly appearing pub in West Cornwall GBG history, and in every year since 2009, and there's a stat you didn't need to know.

Of course, for all fans of Cornwall real ale pubs AND Neighbours, it is hard not to confuse the Trengilly Wartha with April Rose-Pengilly, but I'm sure you are all aware of this .....

It's a long way to come for a pint of Black Sheep, I can tell ya, but so amused was I to see it on, it had to be done.  What's the worst type of bar blocker?  Probably one who EATS at the bar.  Bowls of chips perhaps, but it was still presented to this pair like a gourmet classic, and they certainly weren't budging, perhaps they couldn't.  I found a seat easily enough despite the surprising busy hustle and bustle in here, but what I did note were the barstools that the blokes were sat on creaking in worrying fashion.  "Oh please give way!" I pleaded to the pub gods, "this would be karma for bar blockers the world over" but sadly the stools just about held on.  Amazingly, they weren't the most annoying people at the bar, this strange bloke who seemed to become some kind of winesplainer (Sommelier ?) enthusing over different wines, and offering unimpressed locals a sip, and even trying to get the barman to try it, even though he was the one being given the tasters!  Despite the problems, I liked this place.  It had a pubbier darker feel than it had any right to, when you looked at those inhabiting it.  Yet, I couldn't quite relax, and I couldn't blame the folk or my pint of B.S.  It was 'how the heck could I get back to Hayle from here?'  Taxi seemed the only way.  So I went to the bar, elbowed a few wine and chip fans out of the way, and was taken to some 'back stairs' (I think this place is residential too) and presented with a phone from 1974, and at the third time of asking, got through to some bloke in Constantine who said he'd pick me up.  Had I remembered Martin's sister lived nearby, I'd have just kipped on her floor instead.  I went back to the bar for a celebratory pint of Potion No 9, as there was an element of Star, Crowlas about this place.  A well-dressed bloke in braces arrived, I thought "heck, my taxi is here already!" and started necking my pint, but he ordered a drink and chatted to some locals so I forgot about him and went to gingerly play the table football game slightly drunkenly, when braces man reappeared and said "you ready then?" so it was him all along.  A funny end to a bizarre day. 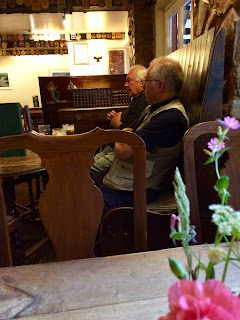 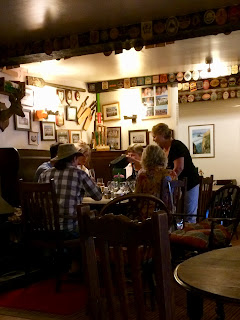 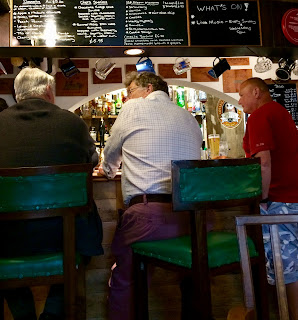 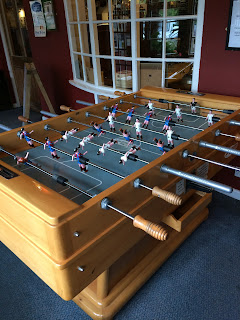 I vowed to have a cheaper, calmer, more straightforward day on the Wednesday.  Did I?  I can't remember now, but I'll do a blog on it in next few days and it might start coming back to me.