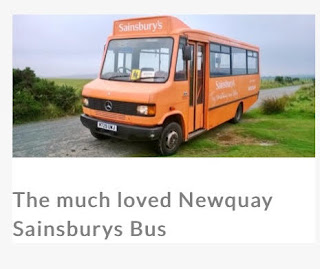 So, here I was, back in Cornwall for year two of pub ticking, this time staying near Hayle because Newquay was never well situated, and certainly not an ale haven.

The aim was to finish ticking off all the GBG listed pubs west of an imaginary line I'd drawn from Newquay down to Truro down to Falmouth.

Last year, I did 25 pubs but EIGHT of them got de-guided so I was down to 17.  Harsh, I hadn't had one poor quality pint all holiday!

I'd done my research, and without sounding too much like a geek (or is that a gweek, haha, first of many Cornish jokes so get bloody used to it), I'd been through each Good Beer Guide (apart from 1975 and 1979 which I don't own) working out which pubs most regularly appear, so expect some 'fascinating' stats along the way as I recall my last week of crazy adventures.


Monday late afternoon, and after checking in at my Premier Inn and getting myself to Penzance (I'd done the crazy Crown last year so no new ticks here), I got the M6 bus out to Mousehole, which might be pronounced 'Muzzle', or Mozzle or Mizzle depending who you speak to, but my bus driver made me repeat it three times just for the shits and giggles.  Oh, and charged me a fortune.

Dad text me whilst I'm on the bus "I trust you've made it to at least one pub so far!" - jeez, gimme a chance father darling, these BRAPA legends can be so demanding.

Outside the pub, the bus broke down and he couldn't move it causing chaos.  Karma mate, Kernow Karma.  My turn to chuckle, as I stepped inside the first pub of my holiday.


This was a GBG debutant, so it was on my 'approach with caution' list, especially as I saw it was part of a chain called 'Eat Sleep Drink' or something similarly sinister.  I wound my way through various staircases, dining tables and reception areas, until I found to my relief, something resembling a bar (well, an actual bar) and not for the last time this holiday, a bit of confusion as I ordered just a pint and paid with cash.  A snoozing dog was dreaming strange dreams and angrily thwacking its tail on the wooden floor.  A very tall American man in oversized coat and hat asked aggressively if he could pay by card. "Yes of course, hang on oh no, but NOT American Express"  replied our bearded host, a sort of Poundland Ross Poldark.  American looked unimpressed.  But this American looked suspicious to me.  I'd heard the Southworth brothers had flown home from their beery holiday of the UK, but surely this was them playing a prank on me.  I sat at a low chair and admired the views of the sea and beautiful gardens which seem to be the main selling point of this place.  My ale was poor quality, the second poorest of my holiday.  It was from a Penzance micro called Badger's Arsehole (I think), 'limited edition', very limp and when I spilled a bit on the table, it formed this horrid crusty thing like a pus filled scab.  Ugh.  There were some fantastic old books hidden next to me,  though I read the first page of this horror book and it was a bit racist about the devil!  "Have some glasses been handed in?" squeaked a mousey mousehole resident.  Poundland Ross just yawned and went to scythe some stuff out the back.  A nice old bloke said hiiiiiiiii in a very smooth voice, but he was the exception rather than the norm, his Debbie McGee-esque wife couldn't match his efforts, it was time to leave anyway.


Luckily, an old local lady saw me waiting for the bus and told me it was actually parked up the road because, today, it was too big to get down this street!  Too big?  It was a minibus for heaven's sake.

Back at Penzance, I got a nice sausage bap and then the bus back towards Hayle, but what was good is it passed another pub I needed ...... 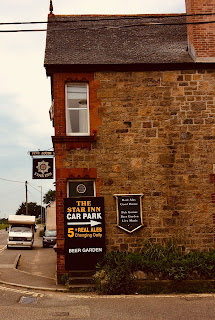 And even better, this was a GBG regular (though so is the Crown in Penzance so that doesn't always mean brilliance!)  Happily, I could feel the quality from the second I stepped inside.  It had a lively early evening hubbub, probably the closest to a traditional pub atmosphere I found all holiday, proper old style boozer.  A friendly place on the whole, especially the old bloke with one tooth sat against the wall with his face permanently in a plume of vapey smoke.  Being a locals local, bar blockers were an issue and although the nice brunette barmaid spied me early on and looked as though she was going to serve me, a Cornish version of Sinbad from Brookside managed to keep his body firmly between me and the bar, glanced back at me, and even though I smiled and he still had at least half a pint left, asked for another!  She momentarily hesitated, glanced at me, but served him first.  Gotta keep your locals happy first, I guess, don't blame her, but was this a deliberate move to 'mark his territory'?  Interesting!  I'd rather he'd just weed on the floor.  Still, I sat down in the window, happily enjoying my Potion No 9 (not 9% as I'd half hoped, half dreaded!), until a 'friendly' dog ran over to me and started fussing, but then I realised, it was cos I had the remnants of my sausage bap in my bag and I had to virtually extract the hungry mutt's face from my bag as it nearly took a bite out of my Good Beer Guide, and that could've been disastrous!  Then a load of Spar workers came into the Star, which seemed nicely poetic, and one beersplained all the Penzance beers to his less beery colleagues, who didn't seem too interested, as long as they were drinking the stuff!  Great pub this, felt like the holiday really started here.  But I had a bus to catch. 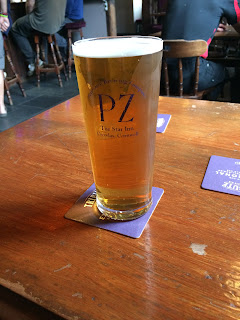 Back at the bus stop, I noticed it went to Camborne where I had a pub tick so plan was to stay on if my bladder behaved itself, which it did!  Sadly, my phone wasn't behaving itself and I had lurk in the street waiting for ages to take the below picture cos the button wouldn't press.  Agh. 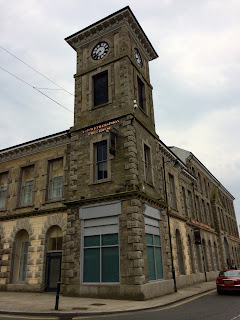 It was a very grand Wetherspoons this one, at first I thought it just seemed grand because I'd gone into the 'hotel' by mistake but when a silent-ish bloke pointed me in the direction of the bar, I was equally impressed.  Normally, you feel 'I know what I'm getting' when I go into a 'Spoons, but this was a cut above and easily the best Cornish one of the four I've been to.  It had the added twist of having been mentioned on 'Have I Got News for You' three days before, as a man had complained cos he wanted 10 bits of chicken but only got 5.  Not sure how that's newsworthy, but it was!  Maybe he was the slightly drunken bloke at the bar asking a timid bearded baldie "are you the manager of this whole place?" and he looked so proud to be asked (he wasn't!) it was quite a touching scene!  I crossed the plush red carpets, circumnavigated a raised middle area where a local was acting like a Geordie (don't ask how, I can't remember, I just wrote it down!) and needed his antlers trimming.  I sat in a far corner seat on a lovely green armchair with my gorgeous quality £1.49 Oakham Citra.  A couple of chav girls were dining, one had the same mustard coloured top as me which was slightly unnerving, though her tan was better and pink sparkly phone case was blingy, I wondered if I got a sparkly pink phone case, maybe my phone would work properly again. Sob.  I got lost going to the loos, which in a 'Spoons of this size, meant I'd walked about a mile before I got back to my seat.  Quality place this, make no mistake. 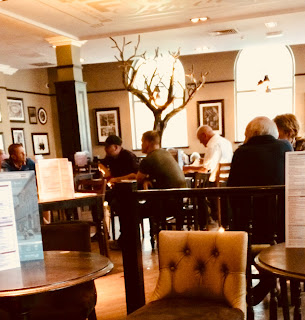 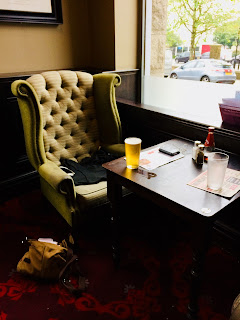 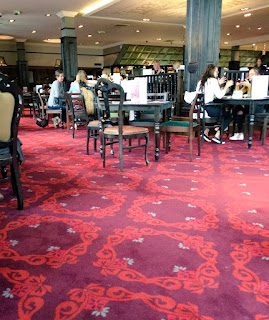 But if I was getting all misty eyed about this wonderful 'Spoons experience, reality bit when I realised how few ways there actually were of getting back to Hayle from Camborne - and it wasn't even 8pm!

After a momentary panic, I realised a taxi rank was just around the corner, so why not squeeze in a 4th and final pub of the night?  Not bad for day one, considering I didn't check in til almost 3pm.
After some nice jolly chats about Cornish pubs, my lovely driver told me NOT to give him a tip as I needed all the help I could get(!) 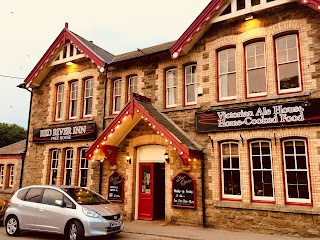 If you want the stats (which I know you don't but tough), it has appeared in each of the last 8 GBG's so seemed a good one to tick off.  It looked photogenic, and walked in to find a very surf orientated pub, with a young vibrant atmosphere dominated by surfers / hippies eating food out of polystyrene boxes whilst probably saying "the plastic problem is killing the environment duuuuuude" as they rolled rizzlas and drank prosecco, so I'm not sure my irrational dislike of them was entirely unwarranted.  A barmaid peered over the top, I nodded as if to say "you serving me then luv?" (but without the 'luv' obviously, BRAPA is very feminist at the core). She told me she'd go and find someone who 'could' serve me, what was this, the Carrion Crow in Oldham all over again?  And I bet these two pubs have never been compared before.   I took my beer with a surfer on the clip to a table under a surfboard, and sat by two men who kept trying to secretly beckon a dog over to sit with them instead, it was all very sly.  I then got lost finding the gents for the second pub in a row,  FOUR doors I'd seen to the right of the pub but one said "Ladies", one said "Disabled", one said "Private" and one said "Kitchen"!    Our friendly 'non serving' barmaid pointed me right (which was left), the loos having photos of sharks about to eat surfers, which felt a bit painful as I unzipped.  At least I learnt Gents is 'Gwer', my first Cornish word.  The Twog loving bloke then mentioned 'the Northwich Embassy' in more hushed tones, my beer was great quality, the pub perhaps a tiny bit aloof and sure of itself, but you can't deny it had felt like a place with eight consecutive GBG appearances. 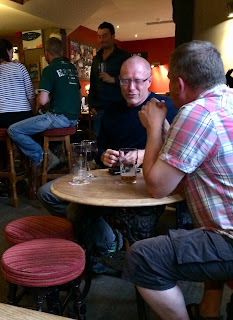 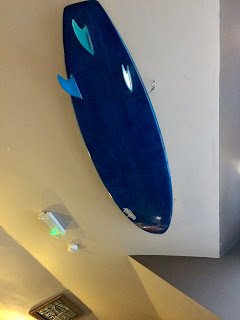 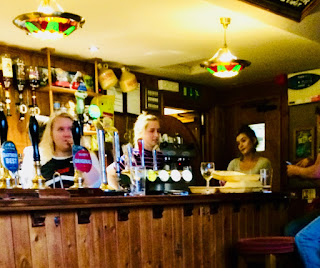 I was conscious not to linger, as I had a 3 mile walk along narrow country lanes to take me back to my hotel, and didn't want to do it after dark.  Luckily, despite the occasional boy racer at the start of the journey, it wasn't too hair raising and I was back at the Premier Inn as dusk fell, all set for Day Two which would prove the trickiest day of the holiday.   Not sure when I'll write that up as I'm in Cambridgeshire for 3 days from tomorrow.  Phew, never stops this BRAPA nonsense does it?