When you're a fledgling twild, having your booster jabs is a necessary evil you just have to deal with.  In adulthood, if you have grown into a Good Beer Guide ticker, the equivalent is West London.

I left you in part 1 hot-footing it back across the M4 from Harlington into Hayes for my third pub of the day.

This was my second trip to a Hayes pub in my life, the first being a random Irish pub before an FA Cup tie on 20th November 1999, and I was a Guinness drinker at the time.  The slowest walking frailest old pub man ever was in, the landlord helped him to his table and warned him "... and no foighting ya bugger!"  It's something me and Dad remember to this day, I described the experience as "BallyK : Late" showing the pub blogging gene was already there 15 years before BRAPA!

Surely this unimpressive looking 'Spoons on the High Street wasn't going to be so memorable?

Of course it was going to be memorable, what was I thinking?!  This is BRAPA, where weird shit happens.  (That could be my slogan).  I entered to find a semi-circle of people, with camera phones out, laughing anxiously.  "What's going on?" I said to the nearest person, a bearded man who replied in a reassuringly thick Irish accent something about 'head shaving for charity'.  A lady who obviously worked there and claimed "I don't like being the centre of attention" was about 40% of the way through the procedure.  I skirted around the bar and used a Mudgie voucher to get a 5.1% Black IPA for £1.75, and gorgeous it was too, though I note my Mudgie vouchers are scrutinised a lot more closely than my own batch - like they have a strange Stockport infrared dye on them that only Wetherspoons staff can see.  I took my pint to a table as far away from the head shaving gang as possible, though I was roped into the raffle draw.  "But I live in York!" I exclaimed, remembering those Scousers in Newport Pagnall who won a cow-load of meat a few months back.  "It's okay luv, check our facebook page later for the results".  I did.  They didn't appear.  I obviously won.  Nice cosy community 'Spoons atmosphere here, I may have been seeing it at its best but the lowish roof helped, ale was top quality, and apart from my ridiculous sneezing fit (I've never produced so much snot in one pub sitting), this was another good Hayes pub experience, over 17 years later! 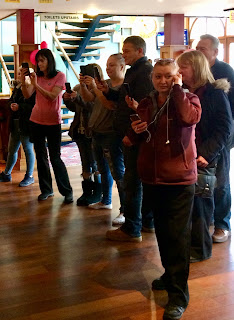 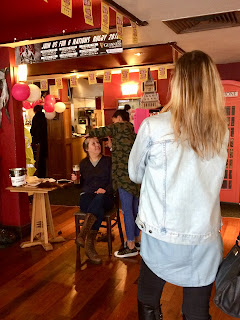 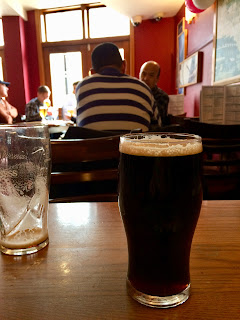 The aim now was to get back on the train and head towards Paddington, hopping off where needed for various pubs.  So I jumped off at West Ealing, but then disaster struck as the old style Good Beer Guide App finally stopped working, and had to be replaced by the new one.

It was a day I knew had been coming for months, that dreaded 'upgrade' to something that looked more complicated.  If it ain't broke, don't fix it.  App developers have never been taught that valuable lesson.

Suffering a crisis of confidence, I cut short my attempted walk to the Grosvenor at Hanwell (something the pub's twitter account picked up on and told me off about in a jokey way!), recovered in the loos of Waitrose, and hopped back on to Ealing Broadway where the North Star was at least, virtually unmissable. 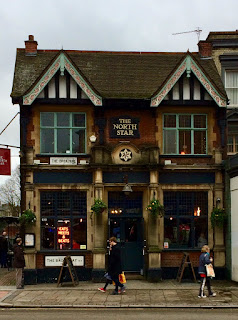 I must confess my initial thought was 'oh no, I've been here before' when I entered this bare boarded cavernous loud vibrant youth hole, with bar through to the right, but no, I was thinking of the Ealing Park Tavern at South Ealing.  Am sure an Ealing regular could tell me they are nothing alike, but for a hazy (or is that Hayesy?  hahaha, sorry) one-off visitor, they seemed to have many similarities.  At the bar, more confusion as the ultra popular Doom Bar had been turned around leaving a gorgeous Kirkstall ale on, but the southerners were treating it with the disdain anything from Yorkshire deserves.  Speaking of which, wherever I went, a large clearing seemed to form around me.  At 38 years old, I was the oldest, most haggard, snotty creature in the building.  The plus side of this was a huge table for about twelve was available just for me, but not before I'd seen the surprising sight of glamorous young ladies dressed up to the nines, playing cards.  It made me look twice (at the cards of course), jeez, I wonder when they got their dominoes out (don't say it Russtovich, just don't!)   Some Welshmen seemed to be challenging each other to drink as much as possible but I'm not sure that's particularly note-worthy.  Anyway, the majority of the pub did what I could never do and got excited by the Six Nations egg-chasing, only when I went to the bogs did I realise there was a quiet room free from the clamour of the front two rooms.  It was all a bit too much mid-afternoon! 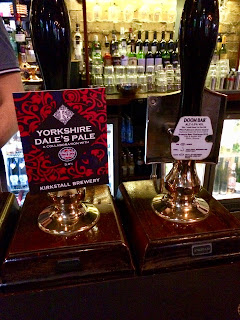 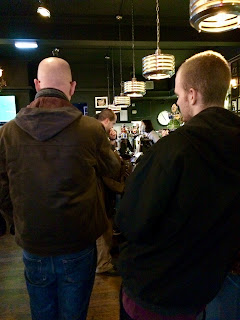 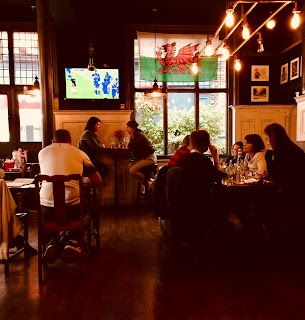 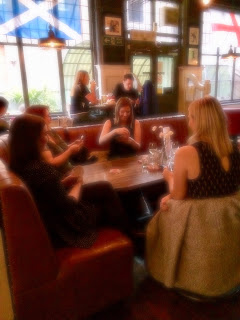 Onwards and upwards then, or North Acton to be precise.  I've been to an interesting pub in Acton once before, but I won't bore you with that story today having already done the Hayes one.

Not far from the station down a slope, as I was still getting to grips with this silly new App, was what would turn out to be my fifth and final pub of the day. 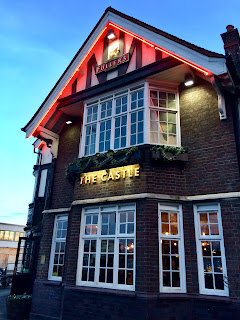 A bit like the White Hart in Harlington, the second impressively sturdy Fullers house of the day and again I walked in to see a choice of either London Pride or the 'Spring Sprinter' which I had in Harlington.  With it being an island bar, and a thankfully quiet calm one after the trials of Ealing, I decided to have a wander, see if anything else was on.  It was no Falcon at Clapham Junction, but after a short trek, I found a line of three pumps, this time including 'Under Current' by Siren Craft.  "Oooh that sounds different, I've try that!" I say to the barman who has walked over with a nervous look on his face.  "Sorry, it's just gawn orf" he replies rather too quickly with a hint of the Dot Cotton.  Now for all you 'Curb Your Enthusiasm' fans, this was where I channelled my inner Larry David and stared all around his face, finally convincing myself he wasn't being entirely truthful.  He should really have said "it's not on yet", I mean why else would the handpump not be turned around?  Don't get me wrong, my Pride was "drinking well" as the experts say, and from my raised seat, a 'punk wall' offered some comfort but everything was soured as I constantly glared at the bar, waiting for the local Twamra woodland folk to waltz in with their Morris dancing garb and sci-fi t-shirts and get free pints of the Under Current and look all bloody superior.  Am sure I've been in this situation before, just not sure where or when.  But it ruined an otherwise okay West London pub experience.


I then made a total mess of trying to get back to Kings Cross, and I don't know how.  I knew I had to jump off at Oxford Circus to change, which I did quite comfortably, but then all I could see was 'Central' Line, where the heck was the Victoria line?  Eventually, a member off staff told me "go up to street level and come back down again".  Well, that's not going to work is it?  But it did.  And I don't know how.

I got the train to York with minutes to spare, so I had a quick half a Plum Porter in York Tap to celebrate with a chap called Leon who is called 'Sloppy' by everyone else! 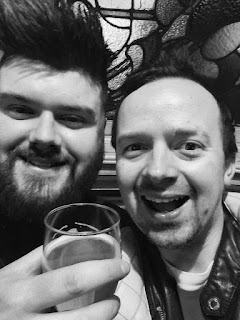 He told me he was quite new to real ale but was getting a taste for it, but couldn't really handle it like he could all other alcohol.  His gf worked at the GBG listed Falcon Tap so he told her what I did BRAPA-wise over phone, she said CAMRA was 'all old men', I said 'oh well', he said 'do you want a pint?', I said "oh you don't have to .... oh go on then!" he left, nice chap, I drank it and reflected on a good day, shame I didn't get my six quota, but I'd be back in London sooner than you think so join me for Tuesday fun!

Oh, and what I forgot to tell you, at beginning of the day, 11am, I tried to go to this GBG entry: 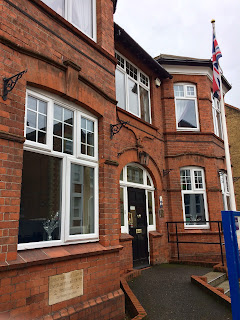 It wasn't open when it was supposed to be, I wasn't too sad as I'd only have 19 mins to enjoy its charms, bonus points if you can identify it.