After the slight nightmare that was Gatley on Monday night, it was time for something a bit more sedate on Tuesday, as my kitchen started to take shape in a shabby chic London 'Spoons sort of way, not really reflected in the below photo: 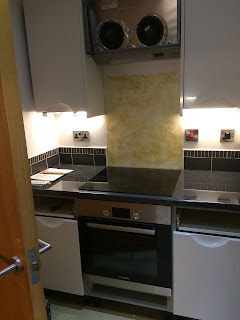 I was ready to forgive tonight's pub, for two months ago, I'd found it closed.  Despite an active Twitter account, there'd been no mention of an early Jan closure period, as they preferred to only focus on 'good news' stories.  Upset at the time, but pub ticking has no room for holding grudges.

I'd been in a 4 hour meeting with two Scottish men so was quite tired anyway, though when one mentioned he lived in Inverkip, I burst into life and told them I had a required pub tick there which led to everyone calling me 'sad'.  The highlight of the meeting almost, but superseded when they said they were staying overnight in L**ds and what pub did I recommend, one their wives wouldn't choose to go to(!)  We went Templar and the Duncan, just to keep them grounded.

Harrogate, the town I love to hate (well, you could say that about many places in the UK) didn't take too long to reach on the rickety 17:29 stopper, and the former 'Little Fail House' wasn't far away. 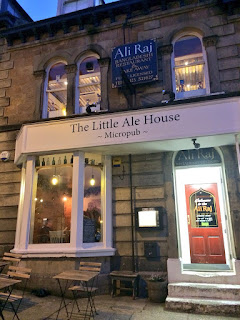 I squeezed in to the post-work Micro crush which involves bar blockers with superiority complexes, an overweight crotch-sniffing black dog taking up about 50% of the floor space, and a mousey woman looking like she wanted to break centuries of pub etiquette ruling and form a queue.  I asked her if she wanted to go first (I still have nightmares of the Mary Berry husband incident), but she told me to go first as she had a 'question for the pub which might take some time'.  Ominous, and I'm ashamed to say I never lingered to find out the nature of this query, but in my mind, she was telling them off for closing over New Year without telling anyone.  A smiling young man called me buddy and sold me the nearest beer I could see, a gluten free effort which I was delighted to see came from Shiny in Derby, one of my modern faves.  Even better quality than Gatley yesterday, if that's possible.  Which it was.  It was fairly busy but I didn't want to be drawn into the "additional upstairs seating" in case it took me away from the 'action'.  By the front door, I spotted the most Harrogate thing ever.  A spent candle, in an empty 'handcrafted' hibiscus and pink peppercorn gin bottle.  It was eventually re-lit by a friendly beardo, who also called me buddy.  I had to protect my flame, as a series of idiots left the pub but held the door open for 5 mins as they chatted to Mrs Popularity just beyond me.  It occurred to me that despite dog and lack of space, this felt very non-Micro, more like a Euro cafe bar.  Perhaps something to do with the clientele, as Harrogate folk give so few fucks about their fellow human beings (as long as they are happy with their pashminas, pearls, Mumford & Sons playlists and upturned noses), it was perhaps the least intrusive micro ever.  No doubt the quality of staff though, I went back for a cheeky half and was called buddy for a third time, as he sold me half a Gemini porter I hadn't even asked for 'because it is a new barrel'.   I had to neck it, and a sign said bring your glasses back to the bar you lower class scum, so I did, and was told 'have a good evening buddy' by mine friendly host, a 4th 'buddy' tonight. 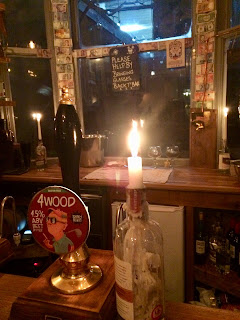 Back at the station, my train was delayed (course it bloody was!) so after making a mental note not to let any passionate Saddleworth silver surfers drive me anywhere weird, I popped into the always reliable Harrogate Tap for a swift half, which had a friendly almost WMC vibe to it. 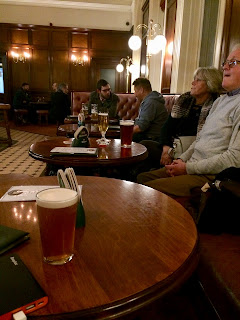 The train journey home, some fish & chips and news of Hull City's lowest ebb yet  (I say that every blog) followed.

I've booked some tickets to Manchester for tomorrow's trip, back over t'hills to GMR again for day 3, who knows where I'll end up (I haven't even decided yet, may even squeeze two in!) so see ya on Twitter 6ish tomorrow.