When my workplace (the good old Yorkshire Bank) kindly decided they'd be sending me down to the Piccadilly Circus branch to learn a new system (which we already use) called Calypso, I made sure they put on a later train back to allow for some evening BRAPA time.  After all, five of my remaining six Central London pubs were all very walkable from there.

I travelled down with Rotherham's favourite stylish mod, Dave Beckett, making his second BRAPA appearance, whilst I handed a debut to Project Leader Cathie West.

Being Northerners, we were seated in a dusty corner of the second floor office, next to a stationery cupboard featuring a rat trap and a bike: 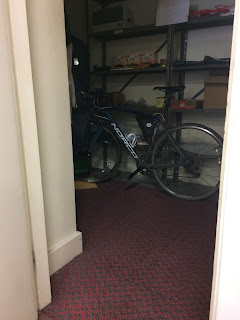 After a series of visitors made cameo appearances, showing us various parts of the system, it was soon 4pm and we said goodbye to the main man Luis Sierra and headed for the pubs.

I was still getting used to the slightly less good new style GBG App so told them to bear with me, our first pub was a mere 0.2 mile walk though it felt longer.  I'd tried coming here 10am on a Sunday last year, but it was closed, despite the GBG claims to the contrary.   It was open this time:

I'm quite liking my Nicholson's pubs (when the ale is well kept), and this one had a nice sleepy midweek afternoon feel, and it's true you could feel the history, something I struggle with when London is heaving on a Saturday.  Cathie, making her BRAPA debut, decided to buy the first round and Dave got his customary Carling, something that sets him aside from most BRAPA visitors.  Cathie made the cardinal error of ordering a bag of peanuts.  I told her about my allergy, and she felt so guilty, she didn't eat them.  She hadn't eaten all day I don't think, so I would've felt guilty had I been a bit softer in the head.  When me and Dave headed out earlier to try and find a lunchtime pie, she should've joined us, but didn't, and as it was, all we found was goat curry, falafels and vegan muck.  You wouldn't get that in Rotherham.  Dave had been squinting at the guy along the bench from me in the corner, and he messaged me on the sly to say it was a Klaxon.  I turned slyly, expected to see a giant pink mouse sat next to me. But I was confused, I'd been thinking of the Clangers.  The Klaxons are in fact a band, and this beardo was the lead singer.  Solid pub, good beer, can't complain. 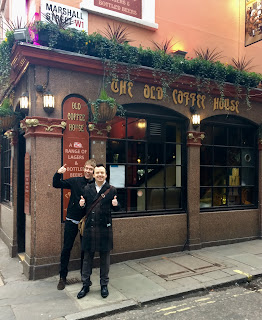 This one looked promising from the outside, and it was even better in, with the roaring fire at the far end, lots of great decor mainly war themed, mirrors, dark brown wood, shiny brassy things and Brodies beers, namely a bit of a 'best of' when it comes to the London pub.  Oh, and the loudest hand dryer in the world which ripped the skin off Dave's hands and made the whole pub shake when used.  Barmaid was friendly in a mouse-like way (but not a Clanger), we admired an old 'clocking in/clocking off' device which somehow led to rants about how the bank handled last weeks Beast from the East situation, and generally it was such an impressive pub hubbub, I don't have any more to add, for once.  Just be grateful! 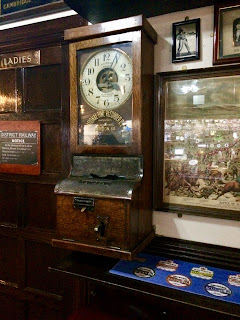 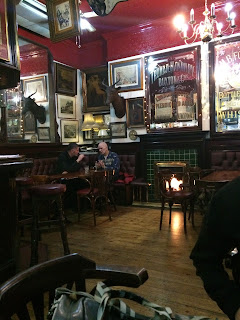 As a 'treat', I let Dave walk up Carnaby Street as made it to our next pub.  I thought he'd enjoy it, but seeing all these shops selling the sort of stuff he likes that I wouldn't let him go in (no shopping allowed mid BRAPA*) proved a bit tortuous for the poor lad.

Our next pub was to prove our last, but I was interested to get it done, as perhaps the only GBG description that's included the words 'escort agency' and 'stilton' in the description!

The beer pump spluttered, a bit hit me in the eye, and the jolly young barman cheerfully told us it'd gone off which I'd kind of guessed.  Reminds me, my first choice in the Crown had gone off too, meaning only my Brodie's Stout was the one I really wanted!  Dave was paying for this round, and before he knew what was happening, he was handed a card machine.  "Errrm, I'm paying in cash!" says Dave.  "Woah, old school!" replies our friendly host, which especially made me chuckle after recent conversation with Sir Quinno regarding cash vs card pub payments on Saturday.  Dave just thought the bloke was barking mad.  Again, we took our 1.5 ales a 1.0 lager towards the back of the pub, where the pubs obsession with pies became apparent, with adverts and pictures everywhere.  I felt this pub lacked the charm of the other two somewhat, not rubbish, just couldn't quite get that same sense of atmosphere and history.  Remember, I'm a 'pub whisperer' and the walls weren't talking to me on this occasion. 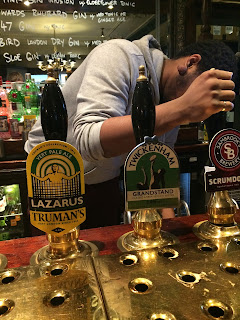 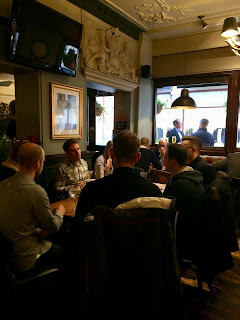 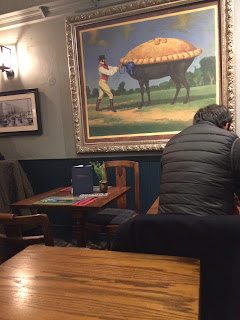 Time had slipped on alarming quickly, as it tends to do when you are in pubs, so with the next closest a good 10-15 min walk, we called it a day and headed back to Kings Cross for our respective York/L**ds trains but not before Dave had found his fave off license for some train cans (I got 2 cans of Pride).

It was a good three pub boost, as I'm really trying to keep my 'pub a day' run going this month.  13 pubs in 13 days at close of play.  Still on course.

* Exceptions to this rule include historic law that says when doing BRAPA in Windsor, a purchase in Boots is mandatory.  Also, in Brighton, the purchasing of fruit teas is acceptable but slightly frowned upon.  In Oxford, extortionately priced olives or cheese may be bought from a market, but only in summer.  Rules do not apply once final pub of day is done.  Does not include pies, pasties,  similar snacks and beer.