It seemed very strange getting a bus from outside York station to a BRAPA pub, just a few miles away.  This was the GBG pub closest to my house I'd still to visit, having of course done all the York ones, Bishopthorpe and Acaster Malbis.

A crazy morning snowstorm had threatened to call the whole thing off, but it was melted by 2pm and the sun was still out as I waited for the delayed X31 to arrive.

Proving what a small world it is, iconic 'outer York' legends got on the same bus in the shape of a mother & daughter duo, once dubbed "the saddest bitches in York", I believe by an Australian woman.  They seem like they should have their own cosy crime drama on ITV, and today they said that their day had been so hilarious, that if they were stand-comics, they'd have a lifetimes worth of material  But they aren't comedians, and the bus rolled their eyes and gritted teeth as the guffawing carried on interminably until an old man pressed a bell which stopped right outside the pub. 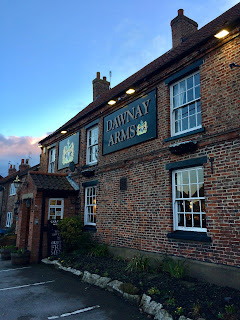 This pub has remarkably limited opening hours for a pub on the busy main A19 north of York, and had only just opened at 17:30 when I walked in.  This was a real "monkey off my back pub tick", closed on both of the two previous occasions I'd tried getting in.  And on the evening of Friday 28th August 2015, I was all set to go the following day, only for a GBG privilege club member to get the new Guide before me and tell me it was no longer in, so I changed my mind last minute.  There was already an old local with an air of Roy Orbison about him (if Roy had amazing taste in jumpers), asking the friendly landlady for a second pint of Budweiser, I'd forgotten how pissy that beer looks.  He must've drank his first in about six minutes.  The ale choice was either John Smith's Cask or a local Treboom, so I went latter.  To the landlady's credit, she came over 5 minutes later to check if it was okay, as was bottom of the barrel, but it seemed fine (you could be cruel and say 'hard to tell with Treboom ales').  Where to sit was a toss up between a dark chilly looking raised area to the left (complete with that most horrific pub feature, 'fake bookcase wallpaper'), or the more dining right hand side, with a fire, so I went for the latter though the fire wasn't as roaring as it initially looked.   I suddenly thought I smelt vinegar, uh oh, but it was actual vinegar on the table rather than my pint.  Suddenly the peace was shattered as four young lads came in, with their Peaky Blinders hairstyles and Millennial Premier League Bantz culture.  You'd think pubs would suit them, but it took them all of 5 minutes to decide how to order a round of drinks.  "Shall we all order steaks?" said the small one excitedly.  "I think we should 'go through' first" said the cautious burly one.  By 'going through', they meant three side steps from bar to ''dining area' where they sat opposite me and bitched about a work colleague called Liam who'd apparently been skiving work saying he had a bad cold, but he'd had a window open next to him all day.  Damning stuff I'm sure you'll all agree(!)   They all left, just before me, not one steak was harmed in the ticking of this pub, and personally if you must go to a Dawnay Arms, pick the Newton-on-Ouse version ahead of this. 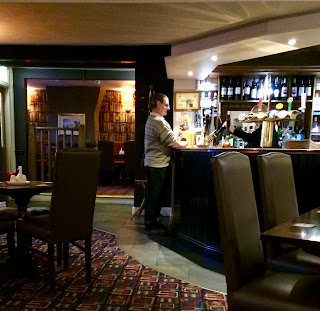 The bus turned up like a well-behaved little bus should, and back in York, I walked to one of my faves the Swan, to meet my friends for a swift half or two.  I sat in the heritage room which is less good than the non-Heritage room!  As always, the pub was blighted by bar blockers of the highest order, but the 'West Riding layout' makes it a bit of a classic. 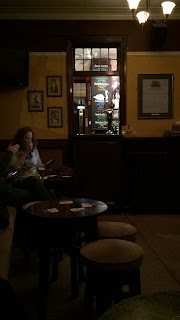 I left them early to go home and check on the kitchen progress, and was amazed to see it finished! 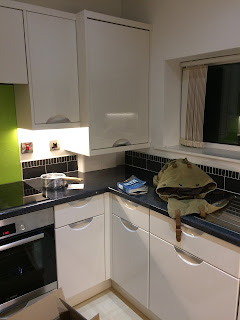 So no need for a 5th BRAPA evening in a row on the Friday, just chance to get settled back in and rest up for my Bucks/London day on the Saturday which I'll write about soon.