At work on Friday, people kept asking where I was going tonight.  "Disley" I told them.  Every single one of them misheard it as "Disney".

"Oh well, at least I can make a joke out of it for my blog" I eventually said to Cath (not to be confused with Cathie of recent BRAPA fame).

Sadly, it wouldn't even be an original joke, as I walked from station to pub, I spied a lively looking beer place called 'Malt Disley'.  'Haha' I laughed hollowly to myself, making a mental note that this could be a decent pre-emptive shout, brilliant name anyway.

According to my new (inferior) GBG App, my intended pub was a 0.95 mile walk from the station, but it really didn't feel that far, perhaps it was lying.

As a pub blogger in Greater Manchester, Lancashire, Merseyside and Cheshire, I'm at my most nervous.  It seems EVERYONE has an opinion or experience on what I'm doing and saying.  In rural Bedfordshire, you can write any old shit (I normally do) but in the North West, someone sees you checking in on Twitter and before you know it, it's "you mean you didn't spot the special low gravity oak cask of Holt's Mild hiding under the bar, you loser?!" or "that bloke you describe as a ginger bearded Twamra is actually my brother Geoff."

The air was getting increasingly colder and as I crossed Redhouse Lane, I was nearly run over by a gritter.  What a way to go that would've been! 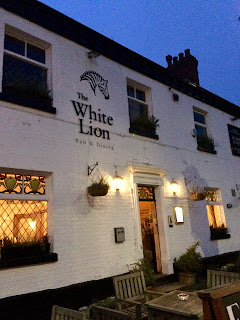 I walked into this large square pub (with, as M.Lawrenson pointed out, a zebra logo rather than a white lion, quite confusingly) and was greeted by a smooth faced, polished young lad with pearly white teeth - he seemed new but may have seen my pained 'cold' expression as he asked if it was getting colder out there.  This was my time to shine, so I dramatically declared that the air was getting colder and I'd just seen a gritter going around the corner. "OOOOOH!" went the assembled company in perfect unison, which was basically two blokes at the bar and a small bearded grey oldster (probably the landlord) who waddled back in from somewhere unseen just at that moment.  And as per my earlier comment, one of the two bar blokes was identified on my twitter as Phil 55494 (hopefully not a robot).  I had to ask our young host for a top up, well not so much a top up but an extra half pulling in my pint.  He seemed surprised!  I was surprised he was surprised.  I sat in the corner and soon Phil 55494 and his fellow droid Dave 88188 left, meaning apart from two dining harridans, the pub was mine.  All I could do was admire some 'humourous' pub sketches from Christmas 2010 and the extreme array of pump clips.  But in BRAPA, things don't stay quiet for long and soon a 'life & soul of the party' character called Allie strode in.  "WHERE IS EVERYONE?" she boomed.  "I'm here" says bearded landlord in soft tones.  She's introduced to smooth face.  She may well have worked here too.  "WHY IS THE JUKEBOX BROKEN?" she boomed.  She didn't seem to like silence, perhaps that is when the demons start knocking?  She gave it a punch and a few angry words, and soon the Smashing Pumpkins started belting out, good work Allie.   She continued singing the chorus long after the song ceased.  "LOVE IS SUICIDE, LOVE IS SUICIDE, LOVE IS SUUUIIIICIIIIDDE!" she boomed.  I pride myself on exiting BRAPA pubs "swiftly and with style".  So my next move, getting my foot wedged between chair and table and almost tumbling over wasn't good in an empty pub.  The landlord pretended not to notice, smooth-face looked embarrassed for me, Allie, silent for once, looked at me like you'd look at a dying puppy.  Thank goodness I'll never return.  Good pub nonetheless.


So, plenty of time left before the train and as I thought, not really much more than 5 mins back into the heart of Disley.  Time to pop in this Malt Disley place and see if it does real ale and can be classed as a pre-emptive? 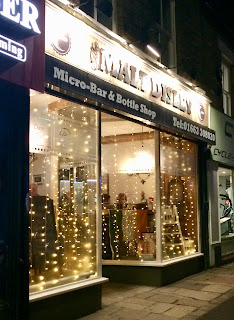 At least I could answer Allie's 'where is everyone?' question from earlier, as they all seemed to be in here!  And one lengthways table between entrance and bar required everyone to temporarily move off it to allow any newcomers to get to the bar, such was the tight squeeze!  This place had the friendly Friday evening atmosphere you'd hope to find west of the Pennines, and helpful barmaids presided over me and my fellow bar blockers very effectively (well, there was nowhere to go).  Plenty of handpumps meant this looked like a good decision, and after recommending a stout to one guy, we got chatting on the time he slipped in the snow and banged his head - one of those tales I wanted to laugh at but had to be polite.  Another chap complained he couldn't read the alcohol percentages under the 'low lights' (it was proper bright spotlights!)  I told him the strongest one as he wanted a half to finish with, it was named after a local 'Elvis' tribute act but he didn't seem to believe me when I told him the name of it (which I've now forgotten).  I told him I promised to back him up when he ordered it so he didn't feel like a fool!  So he summonsed a barmaid over and asked "do you have a beer called blah blah blah?", she looked confused so I interjected and said "yes you do", so she turned the pump around and said "oh, you mean the ELVIS?"  "THAT'S NOT WHAT IT'S CALLED!" I exclaimed, exasperated.  The old bloke really distrusted me by now, and she didn't appreciate the outburst, meaning my plans to order 'Ploughmans in a Bag' (only the best quality UK pubs sell these, see Big Six in Halifax) were put on hold.  It was time to catch the train anyway, great little place this.

I took the train back via Manchester and L**ds, but serious delays due to some incident between Stalybridge and Huddersfield made me an hour late home, as we had to link up with another train at Stalybridge, and make an unscheduled stop at Dewsbury which no one approved of.  I was joined by a crazy gang of drag queen loving 19 year old party girls which was as terrifying as it sounds, and not long to recover before my Brummie trip on the Saturday.

Still, a great tick to get done as it comes under Cheshire, a county I'm determined to finish by late summer and progress this year has been very slow so far, not yet managing ONE Saturday there in 2018 but it's not through want of trying I can tell you.