BRAPA - Welcome at the Lord Nelson : A North Hull Story

Whilst more experienced pub tickers are spending the Christmas period letting me 'catch up' by jetting off to places like L.A. and Vegas, or admiring South American moths whilst watching non-league football in the West Midlands, the harsh realities of pub ticking continued apace in BRAPA land.

And harsh realities don't come much harsher than a chilly Boxing Day in North Hull.  Even when you ask your average Hullensian what the North of the City is like, they wince, wrinkle their kindly weather beaten features, and let out a low droning vowely noise from the back of their throats.

In reality, I could never have expected it to be open.  Normal opening time for a Tuesday is 1pm.  Today was a Bank Holiday, so the odds of them opening 12 noon seemed very slim.  We barely even looked.  Dad (he of recent 'bee in bonnet about pubs not opening when they should over Christmas/ New Year despite little evidence to support this' mentality)  didn't even properly park in a space.  I had to agree with him on this occasion that the outlook was bleak.

But suddenly in the wing mirrors, we noticed a small army of Mums and Twilds wielding boxes and bags heading for the side door of this estate jewel, this was my chance......

Even at this stage, Dad pondered that perhaps this was a private function but if I see a BRAPA pub door even slightly ajar, I'll chance my arm.  I may even make a crowbar part of the essential kit.  I strode confidently up to the bar with the air of a regular, and we were greeted warmly by this old couple.  This was like a throwback to pub owners from a time before I started pubbing, just a relaxed gentle couple enjoying the social side and hard work of running a pub.  Immediately, they asked Dad if he'd parked here.  He had, of course (properly in a space now).  "Would he mind putting his car in here?" temporarily confusing us, as he gestured to the right of the bar.  Okay, this pub was a bit Wild West but surely he wasn't supposed to drive his car in?  Isn't that ram raiding?  Silly us, he meant he wanted Dad to key his reg no. into a device on the wall as they get none pub users parking here.  Boo.  99% of this pub's clientele must arrive on foot I'd think.
We ordered from two Christmas ales (one Wadworth, one JW Lees) and a top quality drop they were.  There must've been a function next door as group after group of women with shoulder tattoos, gold teeth, strappy tops, tans and twilds wandered in.  If this is why they were open at 12, I salute them all!  A few locals appeared, and a bunch of Sky Sports Carling young men, settling down for what was obviously going to be a 12  hour session.  Apart from one barfly, any men who came in had tracksuits bottoms on.  I felt terribly overdressed in my jeans and woolly jumper. The pub was warm and cosy, tinsel and rugby league dominated the decor in the sweeping estate pub main bar, but such warmth is something the George (our other Hull pub today) could've done with matching.  Despite it's limitations, this was one of my more positive new Hull pub experiences of the last 10 years, if you leave your snobbery at the door (and I'm from York so lah-di-dah darlings, mwah). X 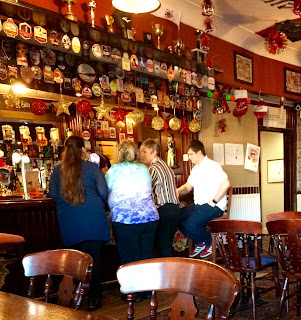 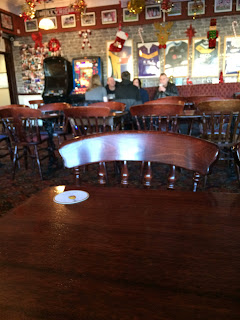 So there we go, and I felt thoroughly vindicated for not doing the East Yorkshire pubs on the 23rd now, as I'd chalked one off today.  4 left.  I'm back in EY next month.  Cheeky Beverley or Hedon trip?

I guess you could argue we could've done all 5 pubs and dispensed with Hull City, but the 0-0 draw with Derby was a vast improvement on my hilarious visit to Derby early this year when we were 4-0 down at half time so I headed back to the safety of the Alexandra!

Three more pubs to get to that magic 1200 mark, which I hope to do in and around the Cheshire area sometime on Saturday afternoon (30th Dec) depending when you read this.

Phew, it's all go!  But am really enjoying BRAPA at the moment.  Sometimes I have lulls and think ugh, this is such a routine, but others like now, totally in love with it!  Roll on 2018.