HMS BRAPA arrived in Tynemouth on a frosty December morning, where the good Cap'n Bernard 'Daddy' Everitt and myself stepped onto dry land to find what was a surprisingly large Metro station, engulfed by a huge market on each side.


After some cheap purchases by rucksack-less Bernard (no, not these above owls), we found our first pub on the left hand side of the main road.  A sign suggested we'd actually walked into North Shields, who'd have thought it? 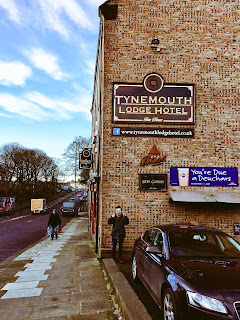 With it's tiled frontage and promise of quality Bass and errrm Deuchars, it certainly looked the part and from the second we entered, the warmest reception from a jolly couple, you could even excuse his hideous Christmas jumper.  We joined the "100% of people today" in ordering a Mordue 'Howay in a Manger', even the two old blokes admitted they had been wowed by such a Geordie Christmas pun.  I asked if we were really in North Shields, and within seconds, they were searching for a historical old map to prove we were - you don't get that in Luton.  The pub was carpeted, warm with a much welcome fire, a sign celebrating 30 years in the GBG from 1986-2015 (and still going) - and it was all so effortless, me and Dad had to ask why so many pubs struggle to recreate this same format.  Probably because it isn't really effortless, just a wonderful illusion created from three decades of hard work.  Dad was looking upwards, wondering if he could hire a 'room' and come and live here for 6 months, and then do the same in his 49 other favourite pubs.  It begged the question how long was this 70 year old planning on living?!  I rarely say this in the world of BRAPA, but leaving was a real wrench.  We knew we'd not get anywhere better.   Even the locals said "ho'way canny lads, this is the best pub in the area" so I had to explain BRAPA quickly and run out of the door before they'd registered my words.  Superb.

Back at Tynemouth station, we dodged further market stalls and made it to Whitley Bay, a kind of cold North Eastern Bridlington with no people and more dog poo on the pavements than I've seen since I went to Portsmouth in 2010 where all the men looked like their shit-filled bulldogs.

In 'outer' Rotherham on my previous BRAPA trip, I told the assembled crowd I was going to Whitley Bay and they laughed, said "ouch" and took a sharp intake of breath.  Yes, this was in the Rotherham area.  So you can see why I wasn't expecting a sparkling seaside resort.

Pub one was just around the corner off the seafront. 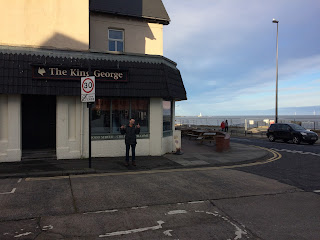 Okay, so the words "total come down" was the elephant in the room on arrival, but top quality 'Ghost Ships' (cheeky name!) from the local Whitley Bay brewery for £2.75 a go was the high point, beer of the day.  "Care, they might be cloudy, they're ..... VEGAN!" we were warned as though it was a brand new word to Whitley Bay, but as it turned out, they weren't cloudy anyway.  I use this beery filler to my story because there was so little to say about the pub.  Bit chilly, your typical seaside 'bar', minimal.  Dad pointed to the use of flags and banners as a means of pub decor.  "Always the sign of a crap pub, lazy when they can't be bothered to decorate properly!" he said, and I couldn't argue.  The highlight pubwise were two grand German chairs, totally out of place in here you'd have to say.  The people were quite friendly though, and randomly, "Irish Pub" by The Rumjacks (a Scottish-Aussie folk punk band) played, possibly the most random BRAPA song heard in 2017.    On the way out, I went through the wrong door and scared a woman hiding in her crypt.  She scowled as the door hit her.  It was that kind of experience.  A bit like Harbour View in Sunderland without the charm.

We carried on down the road and turned left into the town proper, where a micropub was about to make an appearance like Jacob Marley knocking at your door in the middle of the night ......

Well, well, well, despite the name and the type of pub it was, this was pretty wonderful from the moment the landlord (masquerading as a Texan hardcore punk band roadie) cleaned the windows energetically on arrival.  Then I noticed a carpet, something more micropubs need in my opinion, give 'em that "lived in" feel a bit quicker.  A friendly but watchful barmaid of red headband and lipstick served us whilst an "old character" with ponytail and army trousers told us he was 'quality controlling' the beers so he was working really.  We sat and enjoyed the warm comfort of this friendly little place, as nice Nosferatu (thanks Cooking Lager) tottered around and a man at the toilet made a comment about the weather, there was room for two side by side in the gents, in a micropub, another sign that this wasn't gonna score very highly on my micro bingo board!  Dad then made the 'schoolboy' BRAPA error of leaning back in his seat, smiling, letting out a sigh and declaring "this is really nice, so calm and relaxing".  With the vortex now open, it was no surprise to me when 5 seconds later, a chap walked in with his bobble hatted wife (twife), twild and twog.  The twog was yapping all the way to the bar.  "Don't worry, it shuts up after a while!" declared the bloke, to which I asked Dad whether he meant dog, child or wife.  The twild was exploring the premises like Martyn Hillier on a watchdog inspection, turns out he was called "Noah".  "NOAH, UGH, WHAT A NAME!" shouted me and Dad in unison, temporarily forgetting micropubs are small.  I coined the term "Noah's Bark" which summed up this group of interlopers, and it was time to depart.  Top pub.


We made our way back to the station, hard part of the day complete, still three pubs to do in today's quest as we travelled back down the line towards the 'Toon.  Join me tomorrow for the write up of that one, am trying to split my Saturday's in two to make reading them a bit easier!

Lots of love and beery kisses,