BRAPA - The Thing from Tring (Part 1)


A bloke called Colin who I used to work with from Bingley once met a lady on an online dating app.  She was from Tring.  From very early in their relationship, he called her "The Thing from Tring".  The relationship didn't last.

Armed with this knowledge, I took my already battered 2018 Good Beer Guide (now worth five times it's original value after Mr Protz's signing of it) down to "The South" for our monthly pub ticking extravaganza.

The key pub of course was in Buckinghamshire, that cruel county just never seems to have an end to it.  But today was the 4th last pub.  And after that, I planned to mop up 5 Hertfordshire pubs (a county I seldom visit) on the way back in to London.

From Euston, I powered up to Bedfordshire's finest real ale town Leighton Buzzard and after a struggle, commandeered a taxi to take me to Dagnall.  There were buses (4 a day), but I'd have been hanging around for too long, ruining my chances of getting the daily six pub quota in.  So I suffered the cost, thinking "oh well, Aldbury is a 3 mile jaunt from there so no worries".  Taxi man told me he'd pick me up in 35 mins to take me across to Aldbury. 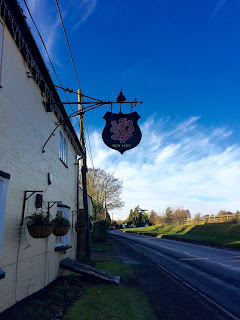 So here we were on this cool crisp winters morn, as I stepped in to this 1740 built building, a roaring fire, a carpet to rival those good folk over at Wetherspoons, and by rural Bucks standards, I wasn't being hit with the gastro sledgehammer, more being tickled with the gastro tickling stick.  I could handle that.  So all was well with world, right?  WRONG.  It all started to go wrong when mardy-faced barmaid peered carefully into the murky Christmas guest ale I'd ordered (the other two were GK IPA and Doom Bar so it won by default).  "Just checking if it's bottom of the barrel"she told me.  If it wasn't bottom of the barrel, it was certainly second bottom of the barrel, still in the relegation zone!  First I thought she didn't want to serve me bad beer, then I wondered whether she meant she was saving the bottom of the barrel beer for me!  Look how friendly she was to the 3 insular old guys who came in and simply scowled at me, and very accommodating to the old couple who came in for lunch. I tried smiling, got nothing back.  The fire fizzled out, symbolic of my whole experience here, and my mood blackened further when taxi driver told me he would be 20-30 mins late.  So I went back for half a Doom Bar, she was pleasant enough this time, but the murky xmas ale was still on.  Then she cracked open the mince pies, offered one to each local, but not me, the only other customer.  The opposite experience of last night's Keys at Hoyland Common, where I walked in fearing the worst and ending up with a positive experience.  Proof you can just never tell!


My taxi driver tried to placate me as he could tell I wasn't happy, told me he was held up by a dubious Malaysian businessman with piles of money who wanted to "buy a village" around here.  Fine, you can let me off some of the fare for being late if you made a fortune from him.  But I only haggled him down £2, not the £5 I wanted.

My mood cheered slightly when he asked the common theme about the pubs in the book I was visiting, as Muslim taxi drivers go, he was quite taken by the BRAPA concept.  They usually get bored of me after 2 seconds.  I told him it was the pubs with "the best quality ale, the theory is if the quality of beer is good, everything should follow, the toilets should be clean for example!"

No sooner had I said this then he admitted he needed to use the loo, would they mind?  He seemed very nervous poor chap so I told him we'd go to bar together, I'd ask and then distract staff by ordering a drink for myself!  He liked the plan. 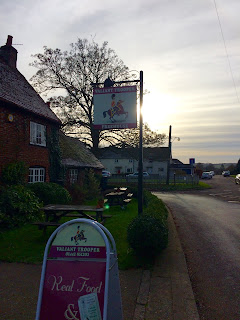 I got the impression I was supposed to like this pub, what with a recent award win, it's pretty little village etc.  Low beams were the order of the day, and we got stared at on entry by a selection of toffee nosed diners.  I ordered something strong from Leighton Buzzard, and finally found a seat by the shiny coffee machine.  About 10 mins later, my taxi driver finally emerged (he'd obviously had a poo a la the taxi guy in the Royal Oak in Perranwell back in July) and on the way out, we shook hands (hope he washed them) and he whispered in my ear "how's the beer, the toilets were disgusting?!" before laughing and leaving, nice to see he'd been listening to my earlier BRAPA speech.  The beer was okay, better than the last pub, but it was freezing along with the whole pub, shouldn't a place like this be a bit cosier?  I went to check the loo for myself, and sure enough, a handwritten sign saying "warning!" was written on the door.  Poor bloke, haha, probably karma for ripping me off.  There was a mop in one of two freezing urinals, a bucket to deal with the leak, and yes am afraid the taxi man was correct.  A twild played with a toy car on the floor just outside, I nearly stood on the little bastard's hand but didn't wanna take out today's problems all on him poor lad.  The staff were a bit aloof, I was desperate to ask one of them what a "Manchester Egg" was but didn't get chance.  A bohemian version of Bob Geldof kept cleaning tables aggressively and muttering feck off under his breath, probably.  A man with a luminous pink hat (think Martin Taylor's highlighter pen) stood in the middle of the room and tried to make an exhibition of himself.  No, I did not like this pub anymore than the Red Lion and god help Herts if this is an award winner was my feeling on departure, yet the GBG description would make you think it's an all time classic.


The GBG gave me the impression the walk to Tring station was a little gentle stroll, so icy main roads with no pavements just added to today's difficulties so far.  And when I then noted Tring was an additional 40 mins walk from the station, I was almost pining for Wombwell!

By the time I got to my first Tring pub, i was apoplectic, incandescent with rage.  How could today have been so difficult when it looked so easy on paper from the safety of my York home? 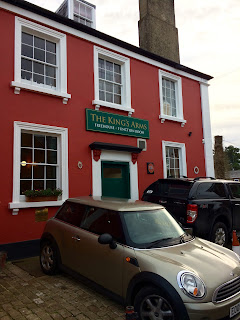 Well, the two local boys sat at the bar (see top photo) could tell how out of breath I was and asked why and then it all came out like a torrent - finally people had spoken to me so I went on this diatribe about the trials and tribulations of my morning!  Good therapy.  They loved it.  The old barmaid hated it.   She had a point, she just wanted me to quit the jibber-jabber and order a pint, so I ordered something cos it said Tring on it and I was in Tring.  It made sense.  "They have triangular pump clips so that's why people go for them, but not me, I'm a lager drinker" one of the blokes told me in a moment of pure logic.  Oh this was so nice.  A cosy small welcoming pub, no frills, no massive dining influx,  just normal Tring folk having a drink and a natter.  "They're all racist in Aldbury, they wouldn't have liked that!" someone said when I told them I'd taken the taxi driver in to use the loo.  The bloke on the right had to go home, so I finally got to sit down and when I said I was going to the Castle next, I was told off for pronouncing it 'Castle' and not 'Caaaarstle'.  They told me I'd be beaten up in the Castle if I said it wrong in there!  In a pure moment of southern snobbery, I was even told 'Caaarstles' are lovely old historical places, whereas 'Castles' are run down dirty ruins!  But I think it was all done in good humour, perhaps.  Time to go.  The locals call this place the "Pink Pub", but it looked red to me.  Sums it all up.  Lovely.


So, join me on Wednesday for part two.  Would I get beaten up for saying "Castle" in a northern way?  Would the Tring friendly vibe continue?  What would Dad have to say about Hull City v Brentford?  Could I achieve my six pub quota considering I was already a bit behind thanks to taxi driver and long walks?  Stay tuned!