"The weather outside is frightful, but Barnsley is so delightful ...." as that Christmas song was supposed to say, I might be a bit biased but I've always had a soft spot for the place.  I lived here for two years, my great uncle captained the football team in 1920's, and if you dislike Donny and find Sheffield as problematic as I do, you have to have a South Yorkshire favourite.  Rotherham obviously is great too.

I'm needing to do everything I can in December to get my "1200 pub quota" before the bell tolls for the dawn of 2018, so after Messrs Couldwell, Taylor and Protz (not Hull City's defensive trio as one friend thought) impeded the BRAPA march on Tuesday, I needed to be creative.  Barnsley on a cold Friday night?  That is creativity, as defined by the Oxford English Dictionary.

Once in Barnsley, a wait in the most soothing bus station in the country soon had me on bus 66 out to Hoyland Common, where I'd visited the Savile Square pub two years earlier.  I must've walked past this place on the way back into Birdwell, but had totally blanked it. 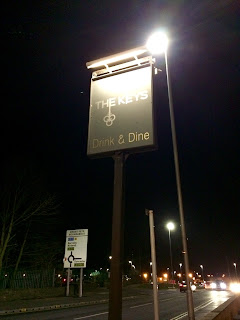 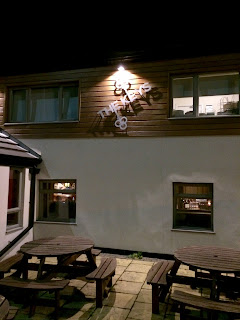 Perhaps it was the "drink & dine" slogan and peculiar keys logo that meant I had no recollection of walking past this place before, but if my jaw was set to 'stern, probably gonna dislike immensely due to lack of pubbiness', then I was revising my pre-conceived notions within seconds of being greeted by a jovial young lad with most Barnsley accent ever, offering me 15p CAMRA discount without me even asking (another great trait of South Yorks pubs, perhaps due to high number of non cask drinkers?).  And he genuinely seeming interested in the customer, take that Bucks!  He was proud to tell me the pub had recently won pub of the season, which in his logic, meant it was probably the best of the 4,500 pubs in my Good Beer Guide.  Well, steady on mate, I've not done Maidenhead Conservative Club yet so can't possibly comment.  Despite the predictable number of 'reserved' dining spaces, there was a surprising number of 'drinker only' areas, less surprisingly all taken  so after a brief dilemma, I eventually settled in a big red armchair which looked like a kind of "reception" area for foodies, but was comfy.  The barmaids were all as smiley and friendly as our barman, singing Christmas songs (got a bit too excited at Mariah Carey) and looking at me sympathetically like "poor lad on his own" but I've always said you can judge a good pub by happy staff so I just smiled manically through my time there.  My Abbeydale ale was first class, and only a few tattoo clad gargling Christmas party groups threatened to set my jaw to 'anguished' again, but a surprisingly top quality experience. 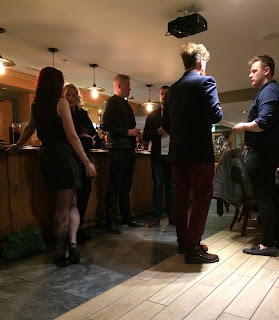 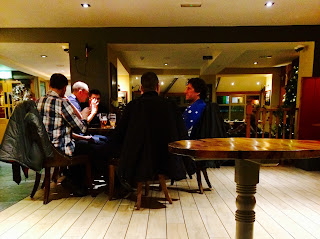 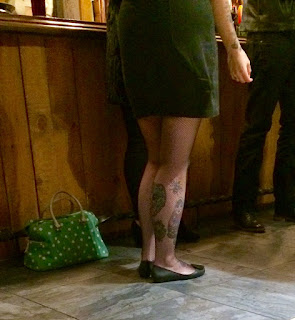 The bus was only 5 minutes late, but felt about an hour with a wind blowing which was more bitter than a pint of Tetleys with an ice cube in it.

Back in town, I was treated to classic Barnsley Friday night sights like "Angry daughter being restrained by father", "Old Man wailing into rubbish bin" and "underdressed teenage girl complaining to underdressed Mum that she should've put another layer on".  You don't get such realness in South Kensington.

Down a twinkling cobbled street almost reminiscent of Whitby or York's Shambles (if it was in Barnsley), I found pub number two...... 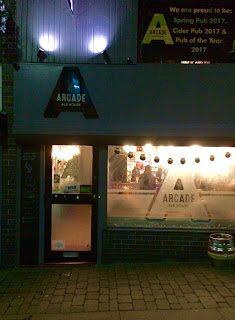 I never hold out much hope about the temperature of micropubs on night's such as this, so was delighted to feel that it was well insulated, first requirement complete.  Amazingly, there was no slobbering dog to trip over (a micropub first!) so I was straight to the corner of the bar, where I was allowed to simply order the first ale I could see with a pumpclip clear enough to read - none of this "try before ya buy, what type o' beer do you like?" malarky, this was proper no nonsense, wham bam here's your pint, man!  I heard a murmuring from upstairs (I needed the loo anyway and guessed they must be here) so found an even busier room, all four tables occupied so asked a stodgy looking blonde couple (who I'm hoping were brother and sister rather than husband and wife) if I could perch at the end of their table if I promised to behave!  The lady answered, none too enthusiastically but they didn't put up a fight, and I draped my (now famous) orange scarf over her seat to 'test the waters'.  She snarled at it like a labrador trying to fend off a poodle. After a quick tinkle, I settled down to another quality ale, but something pubwise was missing.  Not only was there no dog or cold draught, but where was the quirky craziness you'd expect from a South Yorks micropub on a Friday?  All four groups simply chatted boringly, so I was like "hang on guys, I've got a pub blog reputation for weirdness to uphold here!"  Apart from one dude who looked like Neil Morrissey from one angle but Greg Davies from another, oh and a wife who looked at me scornfully every 5 minutes, nothing to report.  Hey ho!  Cosy stuff.

Next, I took the train one stop further down the line to Wombwell, where I'd previously only been in BRAPA's formative year of 2014 on a hot Saturday evening to a jolly pub called Anglers Rest where nice landlady kept checking drunk me was ok, and yes the walk from railway station to centre was every bit as far as I remembered it!

Onto the main street I turned, past some rather terrifying looking bars (oh, how to be an Alan Winfield at a time like this!) and despite a few young lads masquerading as bouncers, the 'Spoons looked a bit sedate by comparison, which was sort of a relief. 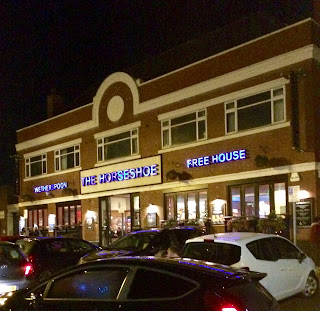 I was entering at exactly the same time as a gaggle of old girls with daughters, and we all hesitated and held doors for each other, which caused me to be down wind of some  '50-a-day smoker's laughs' - it was your classic 'Spoons entrance.  As they all went, somewhat bizarrely, away from the bar, space was clear for me to get served by a personable young lad.  I'd forgotten my vouchers (schoolboy error) so had to pay the astonishing fee of £1.99 for perhaps the best quality ale on a night of quality ales.  No idea what it was, summat local.  Good idea to get seated on the edge of the pub, so I could keep an eye on everyone, 9pm in here was bound to be interesting - and failing that, fans of Wetherspoons carpets were treated to something special here.  Down in the loos, a shifty looking 14 year old boy who was possibly a drugs mule for some older kids hid in a cubicle after I tried to look at him like I was an undercover policeman.  My mustard jumper probably brought me into disrepute.  Back up at my seat, a bargain basement version of a Gallagher brother was trying to inspire his mates into "Friday night, let's go crazy" mentality, but they seemed happy to drink quietly and not make a scene, though it didn't stop him racing around the pub like a man possessed.  Other than that, old people clapped, young girls with tight jeans gossiped, and a train was delayed just long enough for me to get back to station without having to stay for a second 10pm pint.  Good atmos here, one of the better 'Spoons of 2017.  Almost Maltby-esque.

So there we have it.  No regrets.  Freezing cold, had to be up early for Bucks, but a fine evening in a friendly part of the world.  Only 4 South Yorkshire pubs to do, 3 of them easy, one I need a car for but there's no urgency as I completed S Yorks last year.

See you soon for my post-Bucks Saturday write up,