It seemed like a good idea at the time.  That was to get a Sunday morning bus down to Bishopthorpe, and take the 'pleasant' mile stroll to the village of Acaster Malbis, so close to my Mum and Dad's house in Naburn, but with no bridge across the river, a lot further in reality.

Truth was, I didn't like having a pub 3 miles away from where I live that is in the GBG which I've never been to.  It was playing on my mind.  And I was going back to Mum & Dad's for Christmas tree decorating (plus a bit of Elaine Page, it's tradition!) in the afternoon anyway.

It all started to go wrong when I got on the bus, tried to helpfully hand the driver my change, only for him to shout at me "PUT IT DOWN!"

Despite closely following my progress on Google Maps so I knew exactly where to hop off, I got over excited when I saw this sign and pressed the bell half a mile too early.


The now half an hour walk to the pub was a soggy affair as the rain teemed down, there was no let up, and as I dodged pot hole after pot hole on a barren country lane.  I did not see one car, only a girl on a horse.  It could have been quite 'olden days' if she hadn't been simultaneously on two mobile phones, telling someone called Linda that Elaine would be around later, and someone called Elaine that she should go round to visit Linda.

It was still not 12 noon when I reached the pub, so I peered across the river in search of my parents house.  The pub seems to have split loyalties between Theakstons and Tim Taylors. 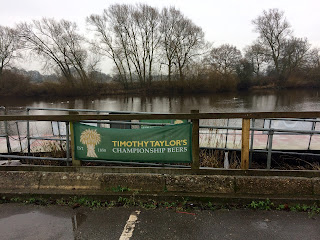 I wasn't the only person waiting for the pub to open.  A moody old man was standing very still and staring longingly at the closed entrance underneath a giant Santa Claus.


After a bit of staff activity at 11:53am, I decided to bite the bullet and see if I could get in as a door now seemed to be swaying in the wind.  Predictably, and like a sheep, "Still Santa" followed me in. 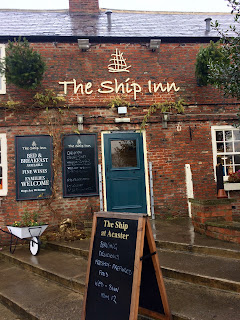 The welcome was friendly in a bubbly brunette kind of a way as I removed my luminous hat and coat, and ordered a Camerons Strongarm, just cos I didn't wanna be accused of Theakston or Tim Taylor bias.  There were plenty of locals milling about, a lot of staff - one of those annoying ones where you can't tell who works here, who is a village character, and who is the local drunkard (cos they are probably all the same person).  It was more snooty yokel than friendly local.  I sat in the shadow of the Christmas tree, which strangely had a big pheasant on it.  But the roaring fire was my main reason for getting this seat.  The beer was dull.  I've had better Strongarm, and not just in Hartlepool.  The pub smelt of smoke, in a reassuring old fashioned way.  The other barmaid (the classic P.I.S.S. barmaid, might be a bitch, might be lovely) kept looking at me like "what's his game?" so I whipped out the GBG and highlighted it (the GBG I mean) in an exuberant fashion.  A group of self important people with helium balloons with "50" on them kept mincing through the pub like they thought they were the dog's biscuits.  Idiots.  A young couple with a vague air of "people who live in the village but not for long enough to have been fully accepted" wandered in with a huge dog called Milo.  Owner Sarah thought she had him well trained, but he basically did the opposite of what she told him.  The pub needed more Milo characters.  Dad came to pick me up but was a bit delayed so I got a half Tim Taylor Landlord and it was much better.  But this pub felt like a standard village pub, much like Naburn's Blacksmiths Arms, rather than something of GBG standard. 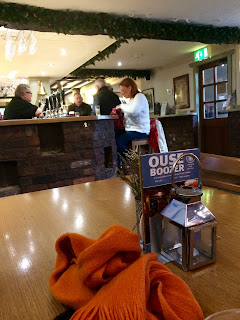 So that was that.  Another one chalked off.  Ten more before 31st Dec is over to reach my target.  Didn't get anything midweek due to work being crazy and too much going on, so attentions turn to Saturday 23rd and it's mysterious trip to a mysterious land which I'll review tomorrow.


For now, many festive returns, hope you got plenty of nice beers inside ya, and more importantly, a trip to a local (or not so local) pub.  And then remember, a pub is for life, not just for Christmas!