The strains of "you're so southern, you're practically Derbys" could be heard echoing off Kiveton Water as I made my way to another Tuesday night South Yorkshire pub, and it doesn't get any more 'south' South Yorkshire than this.

I'd been expecting a traumatic walk between Kiveton Bridge and the little village of Harthill, after other recent traumatic roadwalks, but the Google Map gods were on my side and I was walking across beautiful fields and lakes, where at one point, a heron almost landed on my head.

The whole area seemed to be a dog walkers haven, I was the only dog-less person in the area and it was hard to know who the master-race was at times, with one man panting enthusiastically as he tried to keep up, and a middle aged woman chasing a stick and whining like a bitch.  It was like my recent comment "a good dog is either asleep or stuffed" was coming back to haunt me.

Then came the main crux of the journey, the ominously named "Hard Lane".  I was imagining the usual "no pavement, no grass verge, awful traffic, strewn with hazards" but it was in fact very pleasant and should be renamed "Easy Meander".   Soon I was in Harthill. 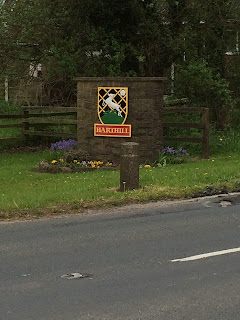 I finally broke ranks with my 2016 trend of entering the left hand room by going to the right (when presented with a 50/50 choice).  This was because five old duffers with their wizened faces wedged in the nosebag looked ready to ruin any pubby atmosphere.  I chose well, the right was much more a drinkers bar and I was presented with a huge range ales from Harthill itself, or Welbeck Abbey so I went for a Yorkshire Hart by the former and was very impressed.  The barman was a friendly, softly spoken baby faced Ned from Neighbours with the kind of gravity defying hairstyle that you would never see north of Sheffield.  Even my phone thought I was in the East Midlands which surely has to be vaguely insulting to Harthill.  They were not shy of pushing the 'pub food' envelope, having "...and kitchen" tagged on to the pub name.  This was the only annoying factor, but anywhere that wins an award for 'Best Sunday Roast in the Rotherham area" cannot be ignored.  It's also won the pub of the year award for about the last 1,000 years (when William the Conqueror was the local CAMRA officer) and you could see why.  A back room had a full sized snooker table, sadly covered, as I went to explore i.e. go to the loo and be nosy.  Some 'Ale Men' looking visitors came in and made an exhibition of themselves attempting the simple task of ordering three pints, so I shook my head like a disgusted local.  I meanwhile struggled to work out what 'fiery popcorn shrimp' might be on the giant blackboard next to me.  I only had 28 mins here before the trek back to Kiveton for the train to York (via Sheffield via L**ds) and it took huge will power to leave! 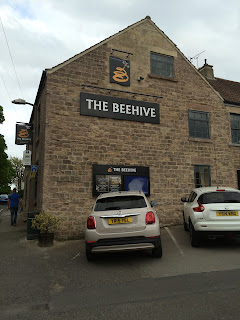 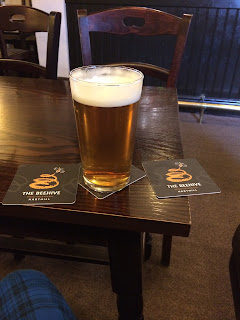 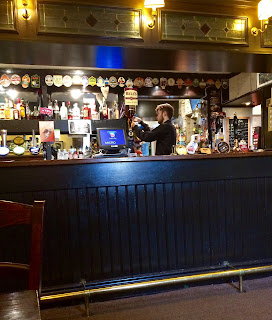 "Hard" Lane was marginally more difficult uphill, and the dogs were suddenly multiplying, as they seemed to have opened their own home in the intervening 28 minutes: 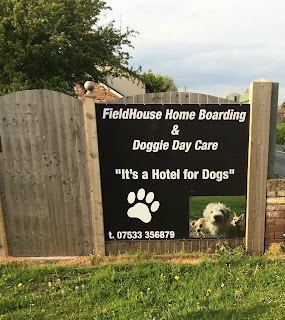 But despite a long and frustrating journey back to York by 21:30ish for the sake of 28 minutes in one pub, I still would consider it a worthwhile evening out.

No BRAPA this weekend due to a local beer festival in Stillingfleet so I'll see you next midweek where we'll see if Hazlehead/Flouch really is as tricky as it looks.  Mapplewell is the back up.  And then Hull City have annoyingly got to Wembley so the Yorkshire Dales trip is postponed in favour of a bit of 'out of the box' Aylesbury & beyond fun!

Oh, and if you haven't done my blog survey about what time you most enjoy going to the pub, do so, it might be part of an important social historical document in 500 years.  Or not.