Because the young, cool generation that now inhabit Chorlton-cum-Hardy have had to put up with living in such a mouthful of a place, someone has taken pity on them with the naming of their bars.

They are all one syllabelled drinking dens with names like "Throat", "Gag" and "Spit".  It fits the youth of Chorlton, who look far too cool to have to form proper words and sentences.

These bars line the streets with optimistic outdoor seating areas, as though they've forgotten that this is in fact South Manchester and not Rome, Madrid or Lisbon.

Luckily, I suppose, I was there on the warmest day of the year so far, in this, the discerning drinkers Headingley.  It wasn't quite the apocalypse of yoof culture I was expecting, but the highest concentration of heavily pregnant women ever witnessed anywhere suggested some 2015 moment reminiscent of Village of the Damned meets that milkman 'hairy baby' episode in Father Ted.

And my first pub was a good example of the 'ale scene' in Chorlton.  "Are you making the most of the sun?" enquired the suspiciously bearded but very friendly bar chap, a strange question when I'm obviously walking into quite a dark pub ordering a pint.  There were no seats in the adult creche anyway, but on the main Beech Road drag, this was hardly Swan at Inkpen outdoor drinking anyway.  I quite liked this bar, a lovely old jukebox which probably gets accused of being hipster with it's 50's vinyl.   The barman warned me my 'Bearly Spring' ale wasn't as coconutty as billed on the pump clip, unless you have an "expert palette" apparently, so I had a rant about beer tasters which I think was too aggressive for the chilled out 'vibe' they were creating.  To be honest, a nice mixture of students, old duffers and of course, pregnant ladies made for a most varied clientele, and I enjoyed trying to find a window in the sun (he'd made me feel guilty enough to seek one out!) and trying to detect the coconut.  A malnourished Ryan Sidebottom was very busy, bringing little tapas style things out to people, (one girl picked at olives and stuff in the most nonchalant way I'd ever seen outside London)  but I did like the feel of the place and it was a solid start to the day. 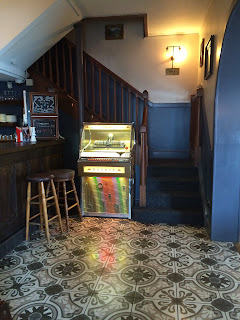 It seems Beech Road is a bit of a "thing" in the same way Bishopthorpe Road is in York, and don't you hate it when 2 GBG pubs are so close together, you cannot pick them out as individual pins on the Good Beer Guide app?  Okay then, maybe just me.  Took me ages to find my next pub! 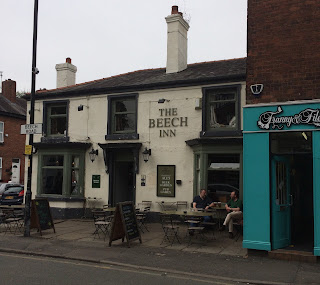 Billed as one of the few traditional remaining pubs in town, I was eagerly anticipating this one but when you notice that a pint of Summer Lightning and a bag of Quavers will set you back £5, or that a former Masterchef finalist is serving Asian Street Food from something called the Hungry Gecko caravan, I think you can see why I was raising an eyebrow in a skeptical manner.  A dull faced Eastern European lass served me in typical 'throwaway' fashion.  Still, I found an old style pub room so old and battered with worn bench seating, I wondered if attempts to keep this little part of the pub traditional had actually gone too far and it needed a bit of love and attention.  Can't win!  In the gloom, an  old pub sign hung inside which is always nice to see, though I'd prefer them on the outside of the pub obviously!   Two old men were sat outside, very much 90's Premier League referees with the David Elleray one finding himself hilarious with quotes like "It's easier to get a camel through the eye of a needle than for a rich man to get into heaven".   When the pub cat went to sit on his knee, I realised it was a mangy thing of no discerning taste but I still went outside for the last 15 mins to try and entice it towards me.  It didn't work so I told it was never going to win BRAPA pub pet of the year to which it yawned.  I have more of a problem with this pub than Parlour, because it felt less honest, or was it simply that modern Chorlton bar culture is seeping through to the older pubs?

Someone at work had led me to believe that Chorlton was one huge village green with pubs dotted around it, that had become such a glass collecting nightmare (i.e. which glasses belonged to which pub), they had to get the pub names printed on each one.  I wondered if this crazy Utopian pub vision was near the Manchester Road where most of the other pubs were, but it was more like Beech Road again.

As you can see, I was shunning the one syllabelled bars until my follow up visit here.  Though this place is probably known as "Marbs" already.  Two huge front  windows were open to such an extent, you felt like the whole front of the pub had been removed, opening the door to get inside felt kinda pointless.  Never have I more wanted to climb in through the window.  A relatively friendly beirdo served me an excellent but strong Chocolate Marble pint (a beer I never recovered from!), though their resident cat was no where to be seen.  The locals were friendlier here, even the old man who kept talking to himself and twitching, the blonde hippy girl with a  shoulder tattoo, and who should reappear but the 90's Premier League refs from earlier, again sitting too near to me for comfort.  It was school chucking out time, so we had an interesting BRAPA first, where a lollipop lady was helping people cross the road so they could get to this bar.  Two more pregnant women arrived, or one might have just given birth, the timescales got tricky as the Choc Marble went down, and then a drunk local spied a Japanese girl and tried to hone his language skills on her but only succeeded in saying 'good morning' instead of 'good afternoon'.  Funny place, and an attempt at a mosaic wall to perhaps match the Marble Arch in Manchester!

I was intrigued how a Wetherspoons could still get in the GBG in a small town which already has 7 other entries, it must be good surely.  It certainly looked the part from the outside, like a 1930's seaside pavillion probably art deco or something.  Inside was vast, open and spacious and I used one of my 50p off vouchers (I always judge whether I remember on my current 'condition' so it was a pleasing sign!) and by gum, that Hawkshead Windermere Pale truly must be one of the finest pale beers out there.  The locals looked a bit shifty so I went outside, where I was greeted by a mass of anti-social dribbling, gurning blokes who probably hadn't done the hard day's work that their drinking speed suggested.  People coming out of work and schoolkids walking past with their Mums looked terrified, and it's Scroats like these that give Spoons a bad name.  Bring back the trendy kids and pregnant women!  Luckily, a man reading his book sat between me and them, acting as a buffer.  I tried to block them out by imagining who Sedge Lynn might be, I thought perhaps Vera's underground anarchist brother who released second world war hits like "Hitler is a twit-ler" and "Goebbels fancies gerbils".  It was that kind of a pub.

One fifth of the Good Beer Guide complete!  A monumentous, fine achievement (even if I have to say so myself) , alas there was no fanfare, no warm feeling of love or virtual hug from my 'army' of secret (imaginary) followers!  Just another friendly (bored) young chap with some degree of facial hair serving me from an interesting but peculiar range of real ales in a place that resembled a Torquay Utd Supporters club bar mixed with one of those seedy over 18's slot machine places in shit towns like Chesterfield and Swansea.  I ordered a smoked porter, too strong and too smoky but my own fault.  The decor was a bit bizarre, upstairs had bright lime green walls which I obviously approved of but the weird hard bed covered in an African style blanket was just strange, who could possibly get into a comfy drinking position on that monstrosity?  Downstairs was a riot of cushions of all colours, shapes and sizes and it appeared that a colour blind pregnant woman had been responsible for the pub layout.  All I could do was display my hastily made "900 up!" placard, like anyone cared though an impossibly long version of "I don't like Cricket" started blaring out of somewhere, briefly lightening my increasingly black mood!  It was home time.

The beers had been strong, the 'pubs' had been, well, not bad but not massively to my taste so I decided to cut my losses and do the remaining three pubs combined with another silly named place "Whalley Range" (where you must go to shoot wallies) on a future visit, hopefully this year as I'm cracking on well with the Greater Manchester GBG entries in 2016.

Enjoy your weeks, and I'll try and squeeze in a trip to South Yorkshire on Tuesday.