BRAPA - Bolton (and a bit more of Salford and Manchester)

There didn't feel much point getting a ticket to watch Hull City, this has to be the most depressing season supporting the club ever (well, since the Dolan days), but there were rich pub pickings to be had in Bolton for me and my BRAPsters Tom and Dad.

After a bit of bus jiggery-pokery, we were soon at the northern suburb of Astley Bridge to kick off today's proceedings, pretty much bang on 12 noon.

And as we approached, the doors opened front and back to let in a waiting stream of desperate drinkers, sounds weird but it was a 'healthy' sight.  I always imagine anything with 'Brewery Tap' in the name to be bright and shiny with wooden floors and brass poles, more like drinking spaces so how nice it was to see your archetypal Lancastrian pub, all carpets, bench seating and no nonsense.  The nine handpulled ales from Bank Top made for a glorious sight, and we were happy for the locals to get serving preference ahead of us despite their insistence on shunning the ales for Holsten Pills which looked more like fizzy wee in a glass than anything else you'll see.  They chatted on the two subjects most dear to north western drinkers, "traffic snarl ups" and "unseasonably bad weather".  It was great, and the barmaid did some "hand ironing" to flatten the beer towels.  The Bank Top mocktail menu was perhaps the only feature that seemed unnecessary.  Dad as usual, hadn't read the BRAPA script and wanted to 'get settled', but you can't do that with pub ticking!  Great start, and so nice to see beers with proper names like Old Slapper and not like something you'd find in a petri dish like "Experimental Amarillo Simcoe Hop version 2.1b # Cultivation Sampler Revolutionist".


After a bus back into town where Tom enjoyed his messy butter pie ("butter pie" being a local thing, a concept Dad couldn't quite get as it contained more than just butter) and we had some boring pork pies from my bag of tricks, it was time to tick off the very central pubs before the phantom football rush arrived back from the game. 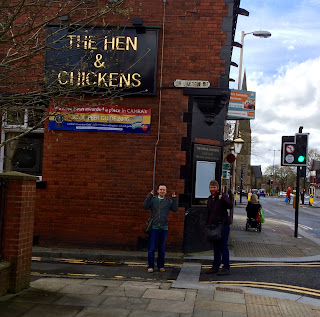 As I made a bee-line for the ales, the landlord apologised for the lack of ales on saying "they'd taken quite a hammering last night"so only 2 were on and I had something from Andwell in Hampshire, just like being in Reading again.  Dad wasn't initially impressed by the man (was it his shifty walk and southern accent?) but he soon redeemed himself with a fine trusting nature, not only offering a CAMRA discount, but accepting my "please sir, I've left it at home" excuses.  50p discount is one of the most generous I've known, especially when beer in Bolton seems to be about £2.50 a pint anyway.  The pub was lovely and warm and it's nice to see this, when my current pet hate has been pubs insisting on leaving the door open as if they can't accept late April might not be 20 degrees centigrade plus.  The pub had some nice features like green tiling around a circular bar, and we sat at the far end away from the barman and all his papers and stuff.  Otherwise though, pub was probably a tiny bit underwhelming. 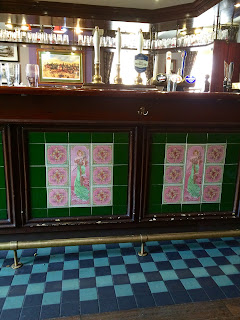 We walked through town and past some tall pink women on stilts ....... 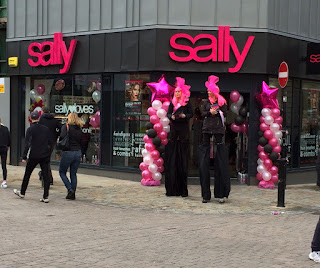 And then we were at a pub which had quite surprising interior .....

Proper metallers pub!  You don't get too many of these in the GBG, though we've all been in them - you know the type, crazy jukebox, everyone has long hair, vests and tattoos, lots of signs up about Jaegerbombs and 9% ciders, and in this case, you can buy a £6 Pre-Menstrual Tension Internet Troll, though sadly I never discovered the details.  Like all good rocker pubs, it was Marstons(!) beers on and despite getting one Hobgoblin out, it was bottom of barrel so barman wouldn't give us even one - very good staff behaviour, I wish this happened more often.  Dad was in the hardcore metaller zone so was soon on the Old Rosie, whilst I tried to stay sensible so I could remember the details and drank a very boring pint of Pedigree.   Dad came over to inform me we were listening to "Children of the Sea" by Black Sabbath but the pub needed a punk rock injection so I slapped on some Dropkick Murphys with a dosage of final album Distillers when they started to go rubbish.  Under the raucous circumstances, we chanted "Steve Bruce has got a big fat head" and no one could even hear us.  The toilet graffiti was wonderful/a monstrosity depending on your taste, Dad complained it did nothing to "facilitate the execution of a simple bodily function" which may have been quote of the day, good stuff that Old Rosie.  Interesting place but a bit of a dive, it has to be said.  It made Manchester's 'Thirsty Scholar' feel like Tap on the Line at Kew!

A short walk to the edge of town found us at the most intriguingly named place of the day..... 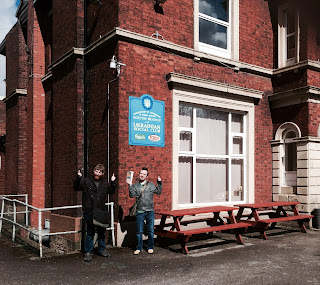 Clubs eh?  That usual fear of getting in and getting served, when you are just an idiot CAMRA visitor, you never quite know what to expect.  Wielding my physical Good Beer Guide seemed a bit excessive as it turned out, woman steward was more than happy to serve us without a fuss.  Luckily we were spared the ringing a buzzer and showing the GBG on a screen!  A very friendly place it was too, the theme seemed to be locals having conversations across you, whether you were at bar, in loo, or just in a doorway.  A young Bolton supporting girl appeared with Dad, absolutely ecstatic to have won only their fifth game of the season, I sheepishly tried to look as much like a Blackburn Rovers fan as possible, not sure why, they were the first club that came to mind.  And that's how desperate things have become.  The beer, Ultra Pale by 'Outstanding' was pint of the day and the building, whilst it felt more like a big house than a pub, didn't feel very Ukrainian apart from a couple of pieces of art and the blue corridor to the loos seemed quite European to me.  Most people were watching Newcastle Utd and acting excited about it for no reason, the only thing that was reminiscent of the Grosvenor in Caversham.  In fact, Dad thought this place was like Hull's Walters with sunshine.  I guess the chairs were similar, it was an excellent place in any language.

After some late Bolton excitement where Dad slipped on some mud (nothing to do with the Old Rosie I should probably add), we were on a train back towards Manc.  Dad went home, but Tom came with me for two final pub ticks .... and I was back in Salford just as I was last weekend. 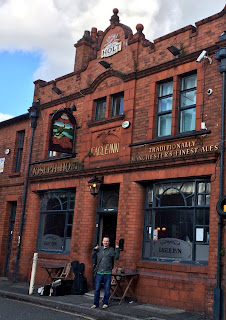 Some pubs are just brilliant from the second you get through the door, and to be honest, here at the Eagle, you could tell from the moment the pub came into view.  Being in a strange location added to the charm, quite hidden away from some of Salford's more poisonous areas.  Pubs with corridors and side rooms always seem to be amongst the best. and we were served by an ultra friendly lady with a gentle scouse twang, who kept making excuses for her own "dimwittedness" but she wasn't really doing much wrong in my book.  The ales on were mainly from a brewery called Bootleg (the Lawless was excellent), other ales by Joseph Holt but I was all Holted out after the events of last week.  We sat in a sunny side room with a wonderful mirror and other great features, and then some pub tourists came in and started taking photos and cooing about the interior - being the hypocrite I am, surely only GBG pub tickers like me are allowed to behave like this(!)   The most vocal and friendly male  got interested when he heard us mention Henley-on-Thames and along Salisbury, it's Henley that seems to be capturing the imagination in 2016, honestly, I'll be glad when I've done the Bird in Hand and the Salisbury Hopback pub and I can go back to being smug.  The loos were impossible to find, hidden in a dark side room behind a piano which I decided to try and play on the way back, luckily nobody saw/heard as 'Jingle Bells' wasn't an appropriate tune.  Pub of the day.

A wander back into Manchester took us to my final required city centre 'tick', the one that had been omitted from the paper based GBG by mistake, but is on the App. 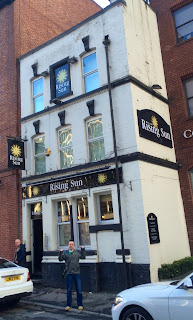 It felt more like a kind of acceptable Yatesies crowd when we visited late on the Saturday afternoon, all 40's-50's somethings leaning against the bar and those annoying tiny high circular tables as if to say "look at me, I can still stand up / perch / lean in a pub, I'm virtually".  Me and Tom had no choice but to stand at the bar and this isn't somewhere I ever feel comfortable, particularly in a bar masquerading as a pub, not that it was too bad.  My Black Swan mild from Rainford (I was thinking low percentages by now!) was as good an example of a mild as you could find, staff were friendly ("try before you buy") and very hardworking (you get that insight when you are at the bar) and Tom's eagle-eyes noticed they'd experimented with the whole "jam jar" thing and ditched it as the empty jars were in a display cabinet with a pointless Cask Marque certificate and some even more pointless display bottles, some drunk, some full, as if to say "here's what you could be drinking, losers!"  Bit of a weird set up and I can see why it was forgotten in the paper-based GBG but like I say, an okay experience and following the Eagle, I'm probably being harsher than if I'd just hot-footed it from, say, the Clarence in Bury.

And there it was, a fine productive day and you can't do much better than six new pubs (3 brilliant, 3 okay) and still remember some of the finer details.  Hull City embarrassingly lost so I wasn't even sad I missed the match, plus Bolton has a couple of new Market Place pubs which I can combine with the remaining 2 'out of town' pubs in two seasons time!