"One of these days you'll come a cropper and get stranded" chimed the women at work, as I told them about my latest Tuesday night adventure planned for South Yorkshire. In truth, this trip seemed quite straightforward.  Train to Huddersfield from L**ds.  Train to Penistone.  Walk 1.5 miles to Thurlstone, pub, back to Penistone,  job done.

The highlight of the train journey was an old crone posing as a doddery old woman - "oooh I've lost mi ticket luv, I had it a second ago" she lied successfully, before making a swift exit at the next station Honley, remarkably nimble for an 80 year old.

The highlight of my walk was seeing the leisure centre where I first learnt to swim as a 4 year old in 1983, I don't think it has had a refurb or the water been chlorinated since I weed in it back then.

"It's not Venice, it's not Rome, my only love is Penistone" to quote a popular rhyme (I've just made up), but there is something rather European about this part of the world.  No-one gets up until gone 4pm, and with my 'pubs' opening at 6pm and 7pm, it reminded me of Barcelona, but with better beer.  And with more string vests, crew cuts, hand me down toothbrushes and men carrying 24 packs of Skol.

6pm opener?  No way, it was just gone ten past and it looked full and 'well lived in'..  I was greeted by a wheezy, limping little mutt as I entered this wonderful old hostelry, very belt n braces, and that was just the decor hanging from the ceiling.  Poor dog, it didn't look like it had long left, and even legendary 3 legged London Pub Cat "Legs" is more mobile.  Maybe they'll stuff it.  Some ruddy faced local walkers were joking at the bar, one husband proudly declaring that his wife "only drinks pints" as though she's the first woman ever to do so.  In Thurlstone, maybe.  The barmaid was a friendly lady, but she suffered a strange affliction, she admitted, "delayed deafness".  So when I gave her a tenner for my £3.10 beer, I asked if she wanted the 10p like a good pub-man should, she ignored me until she'd passed me the £6.90 and then heard the question!  Very odd.  I sat on the far side where the ruddy walkers joined me, whilst an old colonel and Joyce Barnaby enjoyed some amazing looking pie & peas.  With book titles like "100 bad jokes" and "90 unusual dog breeds" not impressing me, I read an interesting blog about what pubs might look like in the year 2041.  It scared me so much, I buried my phone in the bottom of my bag and breathed in 2016 pub life in Thurlstone.   The May Fly ale from Phoenix was top drawer, and as usual, I was sad I couldn't stay for a second drink. 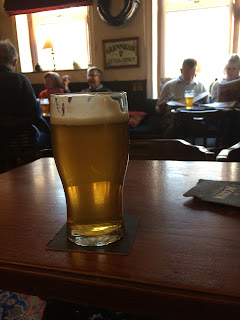 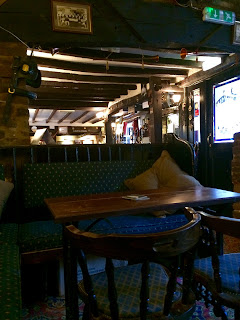 I walked back into Penistone and prepared myself mentally for the fact that I was going to a 'club' with the whole CAMRA card / signing in / crazy locals potential.  Whatever the attitude, you can rarely be as anonymous in a club as you can in a pub.

It was just gone 7pm so glad to see it open and a kind old woman at a desk ready to greet me.  Problem is, she hadn't even heard of CAMRA when I showed her my card.  A large shadow loomed behind - the club president!  "He says he's CAMRA!" she explained.  "We've written to YOUR people about this!" he barked.  Uh-oh, seems CAMRA are persona non-grata in Penistone circles so I explained I'd come from York especially, and he begrudgingly signed me in "as long as you only stay for one drink!"  Good grief, I told you clubs were an unknown quantity.  Once inside the main room, the atmosphere was luckily convivial.  No-one even looked up, the two snooker tables were fully occupied, three men were deep in conversation, and their wives sat against a wall looking obedient but gossipy.  A smiling tanned barmaid served me a £2.18 (take that Huntsman!) pint of a Little Valley beer I'd not seen before,  and I set out my stall to display all my BRAPA paraphernalia and drink my pint as slowly as possible if I was only allowed one.  I went to chat to the nice woman on the desk about the 'incident' and she told me something had "gone off" between CAMRA and the club (not bad for someone who hasn't heard of CAMRA) so I apologised if MY people have been misbehavin'.  It was a lovely club room and despite being unwelcome, I felt very at home!  An amusing twist then happened when an old man made eye contact, I said hi and he asked "are you here for the interview?"  Huh?  Could I go from banned from the club to working for them?  I didn't react quickly enough and a man cut across to reveal he was the real interviewee.  They later returned from behind a door bearing the inscription "the office" (possibly an office) looking stern and glum.  The club president briefly returned to glare at me from the doorway.  Time to go.

As I stood on the chilly platform, I wondered if perhaps clubs shouldn't be listed in the GBG at all.  But then I thought, no.  They are, to pub tickers like myself and Martin Taylor, what jumping off a cliff with an ironing board is to an extreme sports enthusiast.  High octane balls to the wall action.

I recovered in Huddersfield's wonderful King's Head with a swift half before the train to York.


In some ways, tonight had been a 'reccy' for my trip to Hazlehead's ultra rural Dog & Partridge where Penistone is as good a staging post as any.  Tricky but not impossible on a midweek night is the verdict,  so that is one for June I think.

See you at Wembley!  Si