In the driving rain late on Tuesday evening, I stepped off the train at Elsecar to make the two mile walk south to the little village of Harley.  The bus and train connections hadn't been kind, and were such that I decided to do it like this.

Elsecar is a great little place.  Four cracking pubs and a heritage museum, I felt like I was saying hello to all my old friends - Fitzwilliam, Crown, Milton, even the crazy Market one, probably the best.  Imagine if Chorlton (just to pick a place totally at random!) had people who were over 60, it was on a hill, and had real pubs.

Two miles walking isn't much for hardcore pubbers like you and me, but it had all the ingredients of a nightmare-ish route, leaving me reasoning that 900 (20%) had been quite a nice round number to die on.  Heavy rain?  Check!  No pavement?  Check!  Cars going way too fast?  Check!  Flooded roads? Check! No grass verge to step on to?  Check!

To be honest, when I joined up with the B-road, a path did appear much to my relief,  my foot (which I don't like to talk about) was hurting for the first time since before my Berkshire 4 dayer).  Ok, so it was no Aldworth-Streatley walk, no Cullingworth-Harecroft, but it was bad enough!

This was without doubt the most South Yorkshirey pub on my BRAPA midweek challenge so far.  It was quiet when I entered and friendly barmaid, Georgia(?) mentioned the weather so I told her I'd walked from Elsecar station.  She looked at me as if to say "people do that all the time you idiot, I am not impressed" - typical blonde!  No, she was good and kept the locals tamed.  The pub was actually quiet at this stage as I sat in an empty room to the left surrounded by horsie type paraphernalia.  It was laid on pretty thick.  Then the first of an influx of Harley locals arrived, an old chap who I'm sure has appeared in every BRAPA Yorkshire pub I've ever been in, he was immediately perplexed as to where his eggs had gone!  Turned out he was talking about real eggs, Georgia couldn't help, they weren't in the cupboard, had someone moved them, he was in trouble with the wife in any case.  Don't look at me, I didn't steal them.  The White Rose Blonde (enjoyed in Conisbrough's Hilltop, and just as much here) was on top form.  A man with paint stained overalls came in and I had flashbacks to the Wokingham Wanker, before another man who'd had a bad day at work stormed in and ordered a "bucketful of Kronenberg".  I wondered if it was that crazy cooking lager chap off Twitter.  He didn't get his wish granted.  Soon, there was about 8 villagers lining the bar, chatting happily and whilst I felt it was a friendly pub, there were times I felt they were closing ranks a bit - even perhaps psyching me out as they discussed bad mobile phone etiquette!  Conversations included Barbara Windsor dying, which turned out to be untrue and someone confidentially whispered that a letter needed posting, strange.  Was this code to "do me in"?  And on my way out, the eggs had reappeared, 3 boxes of them, no idea where they had been.  A happy ending to a happy pub! 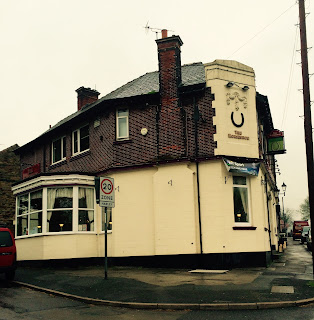 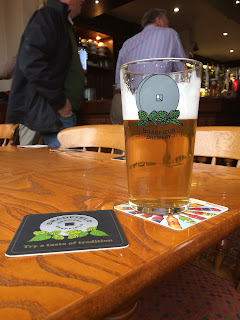 You may well think it strange that I then walked the mile to Wentworth (where there are two pubs I need), didn't go in one, but simply got a bus back to Elsecar from outside one of them.  Again, logistics, you'll have to trust me on that one.

Still, Wentworth looked a beautiful village and a man with an element of George Formby on acid called me "bud" so lots to look forward to later this year!

Back in Elsecar, even the local train station teenage scumbags were nice enough to move so I could get past, but the bespectacled train conductor wasn't so lucky, getting called a "24 eyed gay bastard" which was a new one on me, but he was silly for stopping to talk to them and the resultant delay (as he decided whether or not to hunt them down) nearly cost me my connection at Barnsley.

Oh well, all's well that ended well and I was home for 9:15pm, one pub richer!

I recently asked the question on my blog "who is most likely to talk to you in a pub?"

The results were far from illuminating, it was quite a bollocks question I set as (a) I missed out that pub staple,  "the nutter" (thanks to Mudgie for pointing that out) and (b) I realised it depends what kind of pub you are in.

Let me explain.  If you are in a trendy modern style real ale bar in a place like say, Chorlton (just to pick a random example) it's most likely a young hipstery barperson trying to impress you.  However, in your village local or Sam Smith's doss house, you have a much greater likelihood of some old locals, or the nutter, chatting to you.  And in a city centre touristy pub or heritage place, you might encounter a wide-eyed tourist/visitor so drunk on the splendour, they'll start waxing lyrical before you have chance to escape.  And in your local 'Spoons, it might be a couple having a meal who are most likely to chat, asking if they can borrow your menu or the sauces, but beware, they might be swingers looking for a route into you (so to speak).

Anyway, 75% of you thought 'regulars' were most likely to talk to you.  Staff were runners up, the landlord/landlady (62%) a bit more likely than a younger member of staff (50%) to engage you in conversation.  Worryingly, 50% also felt the pub pet was the most likely to 'talk' to you.

Tourists/Visitors and Old People didn't fare too badly either, younger people did, but at the bottom with no votes at all were Families and Couples, the latter surprising to me as I often find them up for a chat on "what I am doing here" usually the nosey wife.  Or perhaps they really are swingers.

Thanks for voting, I'll add it to the PPD (perfect pub database) (which doesn't actually exist outside of my mind).  Next time, we'll look at your favourite drinking times.

See you down south on Saturday, Si