It was a relief to be away from the Rising Sun in Altarnun, where the wake was still in full swing.  Has there ever been a more painful, toe curling tick in BRAPA history?  I cannot recall one. 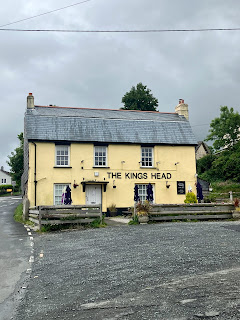 The rain has stopped, that is one plus point.  But the pub opening hours aren't as kind, 5pm opening ..... 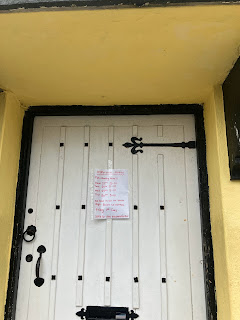 You might have to squint, but the pub actually opens at noon on a Monday, but 5pm Tue to Thurs.  Weird.  No idea about Fri-Sun.  'Back to normal' isn't too helpful to the casual visitor!

I was having no taxi joy.  Never have I rang so many numbers (two or three times on some occasions) only to be denied at every turn.  Let us review them:

Ace - Far from ace. Crackly, vague, not recommended by anyone, had nothing, closed at 4pm.  Useless.

Dan's Taxis - "Ey up, Dan 'ere.  If you are getting this message, I'm probably out of range" came the dulcet pre-recorded northern tones of Dan.  He was usually out of range, and when he wasn't, he had nothing for me.  But he was genuinely helpful and tried to help me find a solution.  One of the three 'big hitters' in the local taxi scene along with LJ and Launceston who stay open late.

Launceston Taxis - Another of the 'big 3', the most corporate sounding with switchboard, ooh la la.  Sadly, despite late opening, full of false hope.  When they told me nothing til 6pm at 3pm, I told them I'd ring back if I got really stuck.  When I did, they suddenly didn't have anything til 9pm!  I forgot to hang up one time when I was slagging them off and they must've heard, ooops!

LJ - Really nice mother hen style older lady.  Had nothing, but happy to hear my tales of woe and recommended me a bloke called 'Cal' who didn't advertise online.  She thought pubs closing entirely to the general public for wakes was poor form too.

Cal Duvall - Took me a while to find him, proper Cornish character could've crawled out of a Daphne du Maurier novel, and very nice but had nothing and warned me my problem was they were all on school runs and most of the companies then shut at 4-5pm.

Parnell - I took a note of the name when one of their cabs nearly ran me over on the road between Altarnun and Five Lanes, funeral person in the back (probably Dick Respect saying 'finish him!')  Got a cheery wave when I ended up in the hedge.  When I spoke to the lady, she was proper dismissive "Oooh no, we are based in Bodmin.  Miles away!" and hung up on me.  Rude, and in the grand scheme of mid Cornwall geography and the fact I'd seen one of their cars, a little bit dishonest too.

Oh dear!  I needed a drink and a lady smiles at me (I've been sat on a pub bench so long, I've got bum splinters) and opens up bang on 5pm. 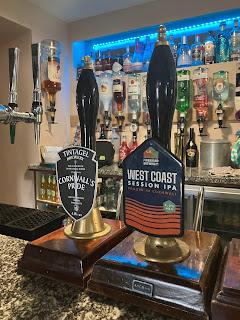 I wouldn't say the barmaid is the most engaging, sympathetic listener, but I force her to hear my tale of woe as I order a West Coast ale (I like Firebrand and had the Cornwall Pride in Altarnun).  She chuckles and says 'another thing to add to your bad day, the West Coast has just gone!' so Pride it is.  The pub feels a bit airy, not very joined up, with fleeting atmosphere if you know what I mean. Despite the pool table and quite a few customers coming in early, I actually feel happier out than in and retire to my outdoors bench. 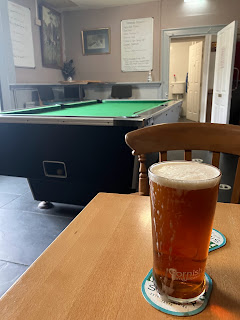 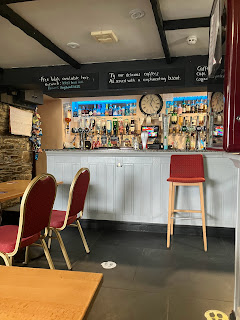 Then, the first bit of good news I've had in hours. I spot a college bus not listed on timetables or in my book.  Hurrah!  God bless the 890 and Google Maps. 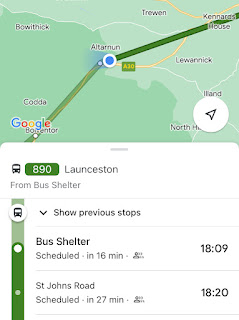 18:09 is 50 minutes sooner than I'd been expecting to get back.  And 50 minutes less spent at this average pub.  Yes, I don't think this will trouble the GBG compilers any time soon.  I'd say Blisland and Altarnun and the Bell at Launceston are safe for now.  I celebrate with half an Old Rosie, remembering that in all this turmoil, I haven't 'greened' the GBG for Altarnun yet!

It is a bloody satisfying greening, I tell you. 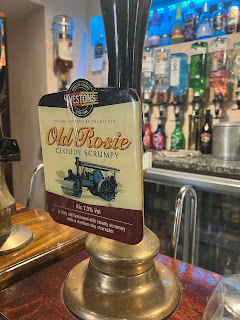 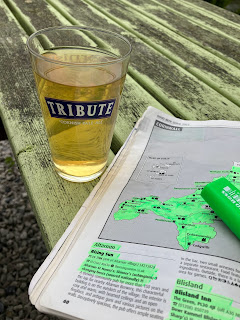 I make my way to the nearby bus shelter about 10 minutes early,  no way I can afford to miss this bus if my dream for salvaging a third tick from this awful day is to be achieved. 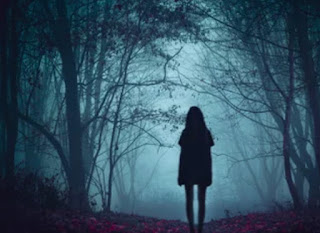 The little bus approaching, about 18:08 a minute early, says 'not in service' but I hold my arm out anyway, surely just an error because the bus is such a rarity and getting towards its conclusion?  But no, dirver tells me it really is out of service and he's NOT going to Launceston.  I stand there open mouthed, unable to quite comprehend.  And then, in the back window beyond, I see a little bus chugging along behind it!!
I jump backwards off this bus, like an Olympic diver, and frantically wave my arm, the out of service driver flashes his lights to try and help, and to my relief, bus breaks suddenly into a grass verge a few yards up!  I run up the verge, jump on, thank him breathlessly, my ticket then doesn't work but he takes pity on me, an ombre haired student smiles seeing my relief, and we speed back towards Launceston.
What were the chances of an out of service bus turning up at nearly the exact same time and nearly causing me to miss it?  What did God/Jimmy Case have against me, or was the dead man off of the Altarnun wake punishing my disrespect?  It just felt like life was laughing at me today.
Luckily, perfect timing once back in Launceston.  A bus heading south towards Plymouth 18:30 was just about to depart so I hop on.
This all meant a third GBG tick was still on.
I press the bell at the oddly named hamlet of Hatt, where the bus does a turning circle.  And it is an easy 15-20 minute walk down a quiet lane to Botus Fleming. 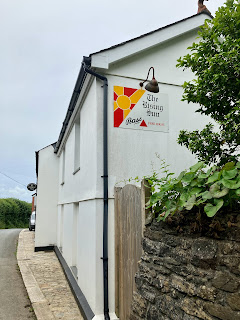 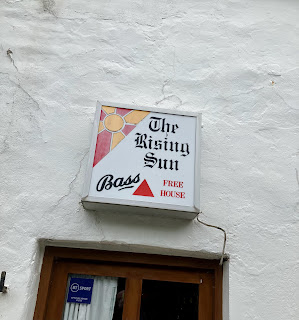 With Bass signage front, back and middle, internal and external, I thought a nice cool pint of Bass would be a nice antiseptic to wash away the taste of a truly horrid day here at Rising Sun, Botus Fleming (2269 / 3832).  I peer at the handpumps but can only see Doom Bar.  I hate being 'that guy' but seeing as Bass is involved and I feel a certain responsibility to Mr Thurman who documents all Basses, I ask the barmaid if Doom all that is on.  She confirms it is.  I say jolly good, that is absolutely fine.  I'd later learn from Mr St John (not the bloke off Saint & Greavesie) that Bass is on sporadically here.  I have a great idea .... to help raise money for the Ukraine, Bass & Doom could team up and make a beer called 'The Doom Bass Region'.  Mr St John and a fellow ticker called Malt would later tell me how much they like this pub.  Two blokes I'd trust implicitly.  But I wasn't feeling it.  Felt like a rather modern lump of Cheshire cheese, quite dining, not enough soft furnishings.  I know I wasn't in the best mental state after my trials and tribulations, but even so.  A tall loud man, think Frankenstein's monster with greyer skin, is forcing his opinions on the other regulars at the bar.  ".... and if you engage the correct thought process, then you might say that crime in Liverpool is greater than Cornwall" amongst the more nonsensical comments that came out of his mouth.  His tone was constantly patronising, he was loud, dominated proceedings, and I got the impression the other locals and staff tolerated him in small doses.  When he said he was off, I could almost hear an audible sigh of relief!  I was off too, if I wanted to catch the hourly bus back to Plymouth. 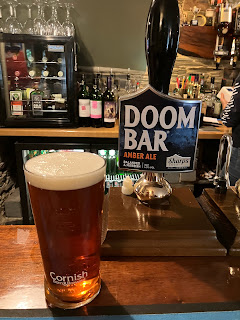 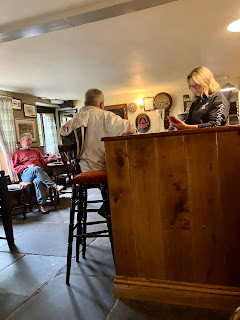 I'm glad to report there were no more twists or turns or moments of pain today, and I was back in Plymouth for what in the end was a reasonable hour with a nice bag of food from Spa and to bed in good time.  Three ticks doesn't sound much in a full day but rural Cornwall on public transport, well I guess that is what they call the 'hard yards'.
And talking of hard yards, the run of absolute ridiculous luck was about to continue tomorrow up near Bude, with a tick, which physically speaking, would be the hardest ever BRAPA tick.  Join me tomorrow for that in Part 7 'The Bude-iful South' (working title).
Si