"You avin' a good night mate?"' squawks a pimple-faced, bum-fluff 'tached, slightly inebriated young man.  He cannot be more the 21 years old.  His two friends smile up at me, blinking with the exuberance of youth.  Youth whose formative pub going years have been cruelly curtailed by Covid lockdowns.  Time to make up for lost time.

It is a difficult one for me to answer in truth.  I've taken the evening Grand Central down from York to London, changed at Waterloo, eaten a squashed salami and tomato sandwich on the interminable onward leg to Portsmouth, arriving just shy of 10pm.  I then get stuck behind two ladies trying to check in at the nearby Premier Inn, the kind chap apologising profusely - they are all out of key cards.  I'm given a temporary replacement.  It has '505' scrawled across the back in permanent black marker pen.  "Ignore that, you are in room 202" he explains.  "Oh well, at least I can turn it upside down!" I reply.  He doesn't laugh.  He then helps me into the lift to compensate for the card shortage.  Which takes ages to arrive as it is stuck on the fifth floor.  I'd rather have walked up one floor.

Determined to salvage something from a difficult evening, and make the most of longer pub opening hours on a Friday night, not to mention getting a head start on my quest to fully 'green up' the county of Hampshire in the coming week (though I won't allow myself to calculate 'pubs remaining' % 'days available'), I unpack in under five minutes, squirt my pits with a bit of 'Sure : Travelling Man Edition' and head into the hectic Portsmouth night, sober as an Alan Judge.

So to return to the initial question, which I accept is a long three paragraphs back now, I simply cop out by murmuring 'I will be when I've got a pint' for I hadn't even made it to the bar when I was accosted. 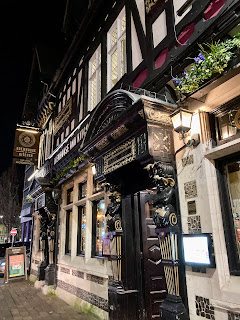 Brewhouse & Kitchen, Portsmouth (2061 / 3624) is the pub in question, a beautiful mock tudor frontage, predictably 'blanded out' inside by B&K, who if you've been in one of their pubs, you've been in them all.  Plenty of space, bare boarded floors, shiny metal brewing equipment exhibited in one corner.  Young officious staff will present you with a beer you've never heard of, but probably tasted before, with a name relevant to the building's former use or area in which we are based.  It will come in an upsettingly heavy and hard to hold handled pint jug, with B&K emblazoned on one side.  Their schtick seems to be that 'the brewing process is interesting'.  Trouble is, people who find the brewing process interesting will instead be found in a craft bar, micropub or supping cans at home.  The folk in here, young revellers, thirty year old couples, pub tickers and a couple of oldies grasping wildly for late food aren't too bothered which base malt has been used in production.  Anyway, I digress.  The young lads hadn't quite finished with me yet. "Going somewhere nice?  Meeting a nice lady perhaps, hmm hmm?" they probe, going a bit 'Suits You Sir' Fast Show.  Unlikely with Keane Lewis Otter in tow, but I don't tell them this.  "Where are you from?" they ask next, detecting an accent.  "Oh York?  You'll like it here then.  York!  Portsmouth!  Same energy!" replies the ringleader with the confidence of a chap who has never once stepped foot inside York's City Walls.  When I ask the same question, I initial get a punchy 'Sarf London!' but when I question them further, they crumble, giggly admitting they mean Surrey, Cobham to be precise.  I impress them by naming a dining pub in Stoke d'Abernon, and they shuffle away to their comfortable corner, leaving me and KLO on a high barrel table, displaying a wheel of Malts, like a really boring episode of 'The Wheel' with Michael Maltintyre.  Little did I know that this little encounter would set the scene for the fabulous, friendly pub town which Portsmouth is.

Back into the street, we are gone 11pm and I hope these two next pubs, a 20 minute walk away, aren't lying when they claim that they stay open until 1am on a Friday.

I skirt around a Nightclub queue, being entertained by a giant lady in glittery pink.  Turns out she is on stilts, for a minute I'm worried she's going to squash me.

I'm relieved when Google Maps decides to send me around the empty backstreets in search of these next two pubs, less happy when I reappear on a similarly chaotic 'party' street.

A bloke on a motorbike stops me and asks for directions.  I explain I'm not local.  "Oh where are you from?"  I tell him York.  "York?  Really?  Do you do coke ..... cocaine?" he clarifies in case I was after a fizzy drink.  I admit it isn't what I'm into.  His mate chirps up "Try before you buy!"  WHAT??  Surely this was a joke.  I know nothing of drug culture but surely they don't do free samples.  And bold as brass too, on a main road, basically shouting at me!  In a week of what would be classic BRAPA weirdness, this was one of my strangest encounters.  I assume the whole thing must've been some staged joke, or terrible attempt at an undercover sting!

Relief hits me once more when I realise pub two is tucked away in the backstreets.  Though Google Maps has this warning for me .....

How would Google Maps know anyway what was happening in real time in a back street Pompey pub?  I'm praying for a quiet pint laying across some bench seating in what looks like a peaceful location. 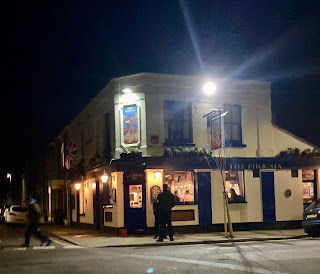 But Google Maps was right, it was packed out.  All you can do in this situation is go toe-to-toe with the bawdy pissed up red cheeked locals, and thank your lucky stars that pubs like this still exist.  There would've been a time (2014 and earlier) I'd have been intimidated by such a place, not any more, you just have to kind of 'play a part' like you're a guest bit-part in their drama series.  Welcome to the Phoenix, Portsmouth (2062 / 3625) which really lit the blue touch paper on a week of fabulous backstreet Pompey boozers.  I'd been to Pompey before, as long ago as 2010/11, so I do have some memories of the Pembroke, Barley Mow, Hole in the Wall and Marmion, plus other unknowns, but I can't remember anywhere this lively.  Perching at the narrow front bar, I'm sure a bloke is addressing me so I reply, only to realise he's shouting to a bloke across me.  His friends notice, so to hide my embarrassment, I double down and ask them if they can recommend me an ale!  Whether they did or not, I can't remember.  I miraculously find a seat for one squashed on the back wall of the back room, and realise what a quirk filled Theatre pub this is, all sorts of craziness hanging from the ceiling.  I'm largely left alone, as much as you can be in this environment, constantly moving my legs and apologise to those shuffling past.  I really enjoyed just being amidst the bustle, and I reckon that is testament to a quality pub. 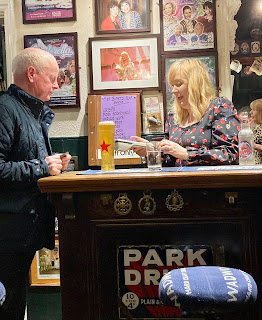 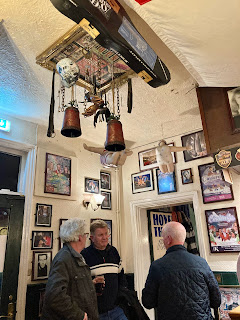 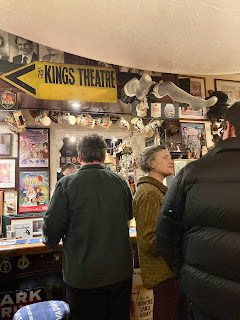 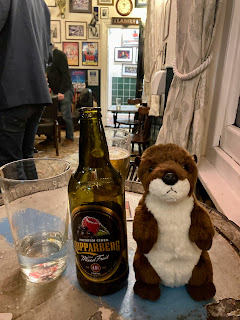 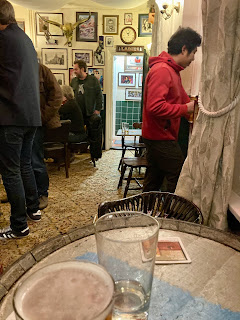 Back up on the busy main road, I've already spied the hi-vis bouncers outside and can't say I'm especially looking forward to my third and final pub of the night. 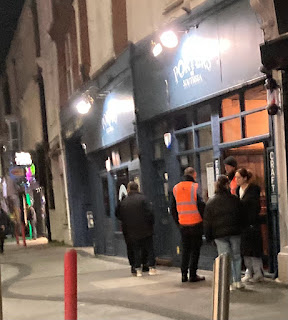 I don't get any kind of 'welcome into our salubrious bosom' from the men of hi-vis, and once inside, I'm both happy and slightly disconcerted to see how calm and quiet the bar area at Porters, Portsmouth (2063 / 3626).  Knowing what I know now about the Pompey pub scene, a week later, I'm surprised to see that this is a GBG entry.  I just don't see the point of it.  Atmosphere pretty much zero, even at 11:45pm on a Friday, it is livelier in the street.  The staff look sullen, and with a bent Brains S.A. pumpclip putting me off that beer, Doom Bar it is!  Oh well, Mr Taylor will be pleased.  So dark it is (the surroundings, I don't mean I'm on Doom Stout), that when I photograph the pump clip, my phone embarrasses me by flashing wildly!  No one likes a flasher.  A barmaid looks up accusingly, I explain "gotta remember what beer I'm drinking!"  Easier than explaining pub blogging is giving the pretence that you are wanting to check in Doom on Untappd.  Though did you know that when you check in 10 Doom Bars, you don't get a badge but actually get blocked on Untappd for one year.  That is a BRAPA fact.  I sit in an alcove on a low settee near a wine rack so KLO can explore.  There's a couple of bored looking couples, supping up slowly, ready for home.  A trip to the loo offers a slightly different pub perspective.  Opening up into a larger area, I'm surprised to encounter a large group of party goers. Frustratingly, as soon as they start belting out 'Shang-a-Lang' by Bay City Rollers, the midnight 'DONG' of last orders is sounded, cutting them off in their prime.  A further 'DONG' for time at the bar follows shortly after.  Reminds me, I still need to Google Tam Paton.  Or do I?  Time to swig off the last of my Doom and head back to the Premier Inn. 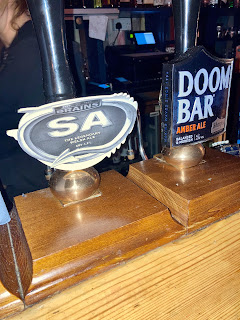 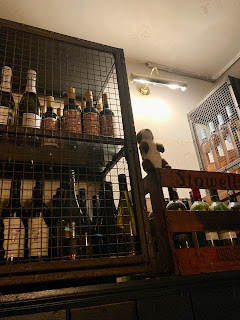 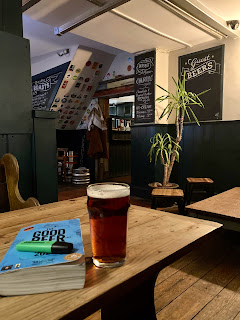 So there we are, THREE ticks before my Hants Holiday had officially begun.  Should set me in good stead for overall completion, though at this stage, I refused to believe!

Join me tomorrow for tales of Saturday, the first 'official' day of the holiday.  SEVEN pubs to tell you about, so take a deep breath.  I'll try n keep it brief (it'll never happen).