Laying horizontally across my psychiatrist's sofa the other day, staring up at the giant map of County Devon on the ceiling, she asks "... so Si, what makes you TICK?"

"The Good Beer Guide and a green Stabilo" I reply.

She slams shut her notebook in despair and declares there is no hope.  The session is over.

OF COURSE this didn't really happen.  It was just a really brilliant joke by me, just now.

I'd be furious if she gave up that quickly anyway, for my imaginary psychiatrist charges an absolute fortune.  And no 50p off vouchers to soften the blow either.

Where was I?  Oh yes, HAPPY GOOD BEER GUIDE DAY!!

I 'declared' on 2024 net pubs on Saturday 30th October, in the very nice Orange Tree, Baldock. 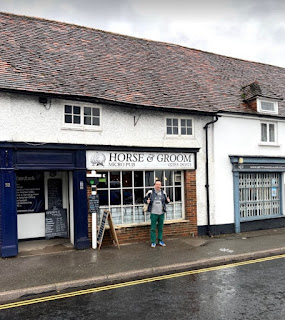 Awards : Cross-Ticker of the Year / Saddest Pub Loss/Amusing Random Error
Our cross-ticker of the year award goes to RetiredMartin.  A mess up meant he didn't receive his Privileged GBG early.  He may've mentioned it.  But, never let the lack of a GBG stand in the way of a good ticker.  Not only has he acquired the pages / new entries from a variety of helpful pub ticking chums, he's already visited this year's most dubious entry (in terms of opening hours) in a town that rhymes with Few Thrills.  Top work.
There's always a pub 'binned off' the current Guide that leaves you totally gobsmacked, because when you went, it seemed to do pretty much everything perfectly, and you could've sworn on your life it'd be nailed on for many years to come.  This year, it goes to George & the Dragon, Gnosall.  He even signed my 2021 GBG.  #JusticeForTheGeorgeAndTheDragon 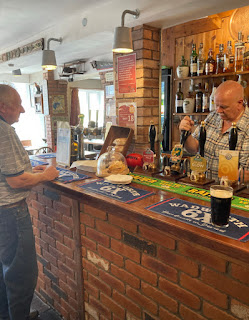 And finally, the 'Amusing Error I spotted in the GBG which wouldn't be amusing or interesting to anyone else in the world probably not even fellow pub tickers award' is found on Page 468.  East Cowton, such a stalwart of a recent 'twixt Darlington/Northallerton ticking day, has buggered off to the Cumbrian border just for the laugh ...... oh and nearby Dalton-on-Tees has moved close to Thirsk.  Crazy. 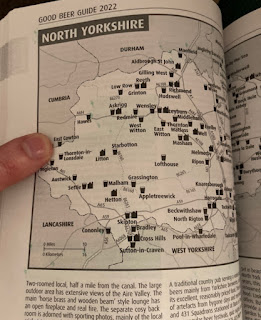 What's Next for BRAPA?
So what does the 2021/22 season bring for BRAPA?
My main focuses (foci?) now are to complete Hertfordshire and Hampshire.  Probably in that order.  And then get into Herefordshire.  Oh, and if I'm doing Hampshire, I may as well get Isle of Wight done once and for all, only eight pubs needed there.
I did vow to get back to Cornwall next summer, I still intend to, but only so much you can do / so many holidays I can take when you have to work, boo.
'Thirsty Thursdays' (thanks Eddie!) for now will be trying to mop up the new gaps in that have appeared in the Yorkshire area, particularly South and West, though there have never been fewer.  Some of 'North' will be achievable too, but I'm hardly getting to Hawes or Whitby after work am I?  Am I?  Well, it is getting back that is the problem. I only have two pubs to do in East Yorkshire, one easier than the other!
Once I've done what I can in that area, it'll be a toss up between Durham and Greater Manchester.  I keep getting so close to completing County Durham, but have never quite managed it.  Red Lion at Cotherstone is in the GBG yet again, I really gotta just bite the bullet and get there by Hook or by Crook (Crook is probably the better interchange of the two).  Their opening hours kill me!
But I need booing off the pitch and have 'you're not fit to wear the pub ticking shirt' chanted at me for my lack of Greater Manc progress.  As we move into 2022, I'm gonna get on it.  I've been so lax around there, my last GBG pub visited there was December 2019 in this lively shed called Pilcrow.
I hope to have an announcement in the early New Year that'll help revolutionise midweek ticking, he says cryptically.
Well, thanks for reading this waffle.  Happy GBG day.  2564 pubs still to do, what am I waiting for?
Si