You may have just seen Her Majesty the Queen addressing the nation, so seems only right that BRAPA follows straight after .........

6 pubs visited for the month, I thought perhaps I'd struggle to reach my minimum target of 31 anyway, but circumstances EVEN beyond the control of the pub ticker meant it'd be a record low.  Well, until we reach the end of April anyway!

Rewind to Lichfield on Sat 7th for my only pubby outing of the month, and a great one it was too.  The only Covid concession was actually, you might be interested to hear, found in the Wetherspoons at Mere Green, my 'slightly' blurry photo (didn't want the old man pissing near me see me taking a photo!) proves it, this at a time remember when everyone thought washing your hands for 20 seconds whilst singing Happy Birthday would make it all go away ........ 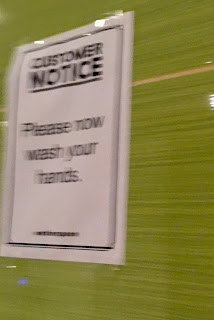 Lichfield was a wonderful town though, ace cathedral too, and now has the BRAPA distinction of being the first place to claim all three pubs of the month ........

Had someone told me in that last pub of the day, Bitter Suite, that'd it'd my last pint of real ale in a pub for a few months, I'd have never believed them (NOT that I was in any fit state to be told anything by anybody at that stage of the day) ......


But things were building, and by the following midweek, it wasn't so much my 'Bitter Suite Symphony' as 'The Drugs Don't Work' as work decided to split us 50/50, sending half of us to work in 'THE BASEMENT' as contingency.  I was NOT a 'Happy Man'.

Of course, I became a 'Basement Dweller' - two theories to how they selected the people.  One was they were choosing their most valuable members of staff to go into the basement (i.e. me).  The other - they were choosing based on length of public transport commute (i.e. we were the ones most likely to catch the thing!)  Believe the latter if you wish, it is true that York-L**ds commute isn't pretty, and I know, I've seen things no one should see, I've been to Portland.

A Lanzarote holiday with Daddy & Momma BRAPA followed, and although things were normal at the start, the island went into lockdown on the Sunday as the Spanish death rate started to escalate.

Back in the UK, it sounded like it was a confusing situation whereby pubs were still open but people were being encouraged not to go!  How does that work?  I was due in Cumbria the following Saturday, and despite one of my due pubs having this sign outside according to their Facebook ....... 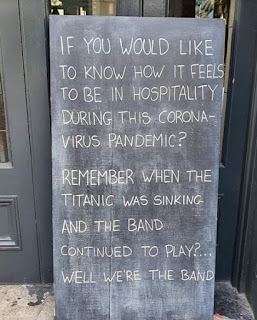 ..... it was pretty obvious travel and pubbing by now were strongly advised against, so it' was a definitive 'no' from BRAPA towers!

We landed back at Leeds-Bradford the following Thursday, our taxi driver theatrically announcing "you are coming back to a very different UK from the one you left a week ago!" though he had kept us shivering in the cold with our luggage for half an hour whilst he ate fish n chips around the corner.

I woke the following day at lunchtime and within hours, it'd been announced all pubs were officially to be closed at midnight on that very same day!

I was given 'key worker' status at the bank which surprised me, but luckily I can work from home.  Has been really really busy but pleased to be able to make a difference to small businesses who have loans they are inevitably are struggling to pay off, by stopping their 'capital repayments'.

And yes, that was about it!  Phew.

** TUMBLEWEED BLOWS ACROSS THE PAGE **

Sooooooo, this is nice isn't it?  (hears faint tap drip in the distance).

Shall I torture myself with how the April should have looked?  Okay, here we go.

"4th ..... West Brom away .... nahhhh, let's go to Tamworth .....   Hopwas?  Is that an actual real place?  5th.  BRAPA's 6th Anniversary.  York CAMRA AGM.  Popping down, meeting a few folk.  Tim Thomas is up from Newbs, wahey!   Fri 10th, Bristol Easter double overnighter and football, whoop whoop, Jesus died for this.  National Bass Day!  Wear my tee shirt.  Where can I get a pint of it in Bristol, hmmm?  Cheeky bonus trip to South London on way back for six pubs.  Easter Monday to recover!  18th, up to County Durham with Dad ... will he drive?  Tick off a few more complex ones.  Edmundbyers.  Ugh!  Errm we couldn't do Hesket Newmarket while we are there could we please Dad, it's only another 100 miles or so?   24th Manchester Punk Festival.  Oi oi!  Gorton?  John Clarke told me to tell him.  Whalley Range?  Ooooh, bit near Chorlton for my liking.  Still, Lizzy meet up?  Other pub possibilities between the punk Droylesden?  Monton?  Prestwich?  Romiley?  Month end, cold compress to head, catch up with blog writing".

Oh dear, I feel sad now.  Anyway, if you are following #SADCASE on Twitter (Si's Ale & Dice Cleaning Adventure Social Exclusion), that is going well.  Young's brewery described it as 'Genius', and they are a proper old quality brewer so they should know!  My flat has never been cleaner, but my beer supply constantly needs a top up. 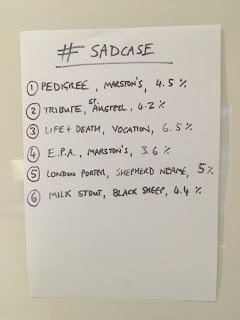 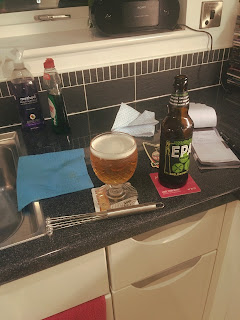 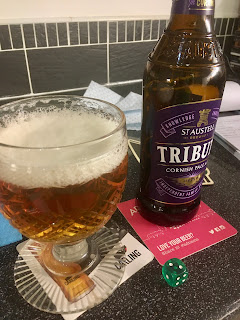 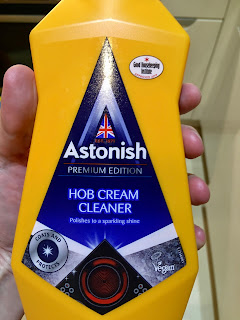 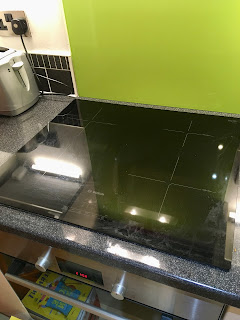 Whatever the next month holds, and it probably isn't very much, please take care and stay in and stay safe, and I'll see you (on here) at the end of April or beginning of May to review the zero pubs I've been to!