Knottingley is one of those West Yorkshire towns you've heard of, but probably haven't had any reason to visit, unless of course for example you are trying to tick off everyone pub in the Good Beer Guide and one appears in Knottingley.

The trains seem very infrequent from Leeds, and I couldn't see a bus service either, so I had no choice but to hang around until 17:16.  I didn't want it to be a fruitless experience though .....

I've been hearing positive reviews of this fairly new place just a stones throw from the station, situated from memory in an old Tetley's pub called Spencers which everyone used to walk past and ignore whilst on the way to next door Scarbrough Hotel.  So at least it felt like an old pub with a huge circular bar, an impressive beer range, and what looked like a hidden upstairs balcony though no idea if the general public are allowed up there.  A very smiley barman broke off from his flirting with blonde barmaid to run round a serve me an excellent Wharefebank Stout.  It was stout weather, very foggy, drizzling rain and almost dark despite not being 5pm.  The pub was generally dead, apart from a few lone drinkers dotted around so I perched on a stool near the bar to get a feel for the place.  When music wasn't playing, possibly the worst laugh ever encountered in a BRAPA pub cut the atmosphere like a knife.  It was a combination of a wicked witch and a car with a low battery.  I couldn't see her but I could make out her hubbie, and assumed he was the funniest man ever as she just didn't stop!  Everyone else just smiled to themselves and tapped on their phones, so I did the same.  A proper old pub made into a real ale haven then, a great pre-emptive and being in Leeds, a good one to consider for night's out, gigs, work drinks etc. and a good antidote from all the Tapped, Friends of Ham, Brewery Tap, Veritas, Botanist type places dominating the scene.

After a pretty excruciating train journey lasting almost an hour, I was finally in Knottingley and the weather hadn't eased up at all, so it was hard to get a feel for the town, though the hooded kids hanging around outside a kebab shop made me think 'dodgy' straight away.  It was a fair 20 minute walk across town to the pub, on a bridge over the Aire & Calder canal, probably a beautiful outdoor summer drinking location.

Quite a huge pub actually, which surprised me, and I was greeted by a massive anchor (not rhyming slang) in the porch.  Something to do with a steamer from the old shipyard.  I try to occasionally pay attention to the cultural and historical elements!  An old local with 'Knottingley eyes' looked at the distrustfully, and then I was greeted by a pleasant wiry chap who I think was the landlord.  He had three ales on offer, I had a Green Hop from Marston's and a Bull's Eye by Jennings - both quite standard (i.e. boring) but nowt to suggest this place was Marston's tied.  The landlord asked me if it was still raining so I gave him a more in depth weather report than he really appreciated!  As I went to sit in the comfy large lounge area, I spotted that most pleasing of BRAPA quirks, a PUB CAT asleep on a chair.  I left him to it, cats like their boundaries unlike daft dogs.  But he was soon eyeballing me with those same "Knottingley eyes", and before I knew it, he'd come over for a cuddle and head scratch, such an affectionate little kitty, I called him Colonel Chambers and think he knew the BRAPA pub pet of the year award is still up for grabs.  He was soon off again though, back to his chair but I like to think he recongised me as a cat person.  And then I heard THAT LAUGH again - nooooo!  Surely not two women with such a laugh?  Well I went to the bar to get my half of boring Jennings, vaguely recognised the man, and enquired as to whether they'd just come from Head of Steam in Leeds, which they of course had.  BRAPA co-incidence of the year?  Soon they came to sit with me and we had a good BRAPA chat, she actually stopped laughing, and he was from Northumberland so was looking up pubs in that county, one I have very much neglected.  I was diplomatic and said her laugh was "characterful" though we all knew the truth!   A good pub.

So there you have it, I had actually considered combining this trip with Pontefract and Kirk Smeaton but ultimately it was all a bit too much like hard work.  There is still an outside chance I can complete West Yorkshire by the end of 2015, especially if I don't go to the Man Citeh cup game, though I think I'll also need no-one to start wanting "Christmas night's out" in December which usually scuppers BRAPA (well, it did last year, the only year!)

And speaking of which, East Yorkshire should be completed (again!) by the end of this month and I've booked my (final) Bedfordshire trip out for January to complete that county so things are progressing well.

I'll be back tomorrow to review Tuesday's trip to Brentford where I got 5 more ticks in. 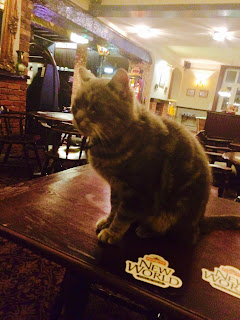