With a little 'New Year' project to turn my spare bedroom into a games room (thus creating the ultimate bachelor pad), BRAPA is almost not at the forefront of my mind at the moment, but don't panic, I will soon be back on track with the kind of "25 new pub a month" ticking we've all become used to.    West Brom yielded just the solitary pub tick ..... 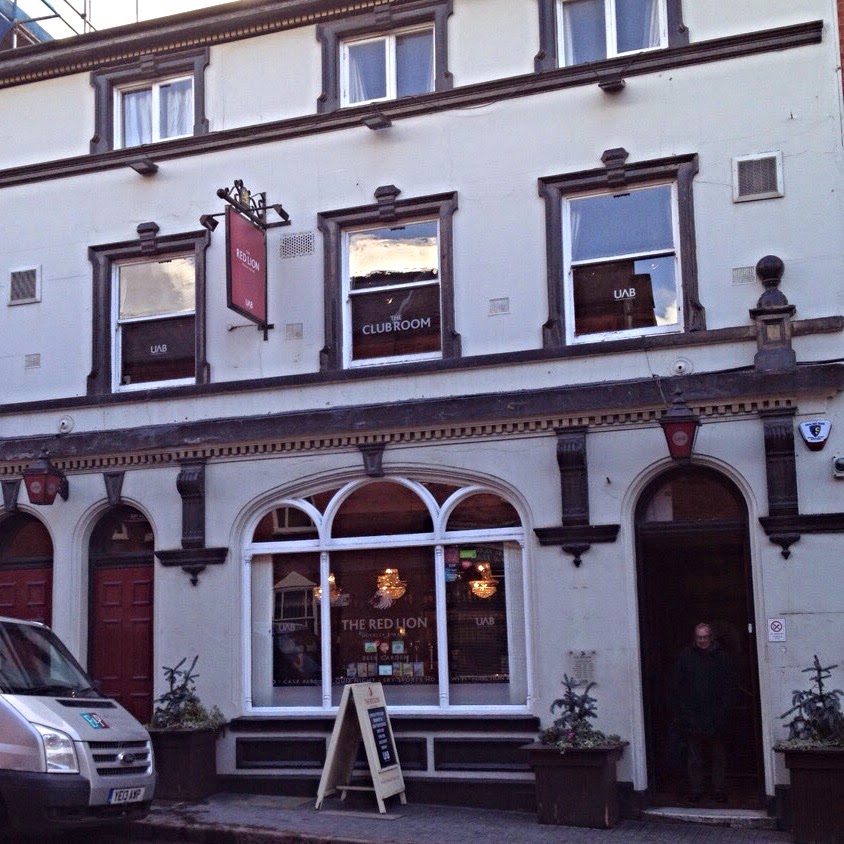 Can you spot the shadowy figure of my Dad in the doorway?  Yes, we arrived in West Brom on a ridiculously cold and windy January morning delighted to hear this was a 10am opener, and just a short walk from the Jewellery Quarter station for ease of getting to the Hawthorns.
After too much gallivanting of late on away days, due in part to the exuberance of Tom Irvin, it was nice to get back to basics with a 'designated pre-match pub session'.  This was a beauty and had the beer been better in terms of quality and quantity, it would surely have been a pub of the season contender.  The breakfast alone deserved awards, Dad and I agreed it is years since we've had one so good.  Even when the fried egg went missing, he brought it out on a separate plate later.  As always, the West Brom fans were chatty, friendly and quirky (take note other West Mids clubs) and the building was typically, old, ornate West Midlands brilliance.  Of the four beers, the two Merrie City ones were on the turn, Ben had to take his Czech Mate back, but full marks on them for putting a new Nottingham extra Pale on with no fuss.  The pub had it's own Urban Art lager (a bit poor for an ale drinker like me!), some quirky art work like Winston Churchill with a mohican and Marilyn Monroe with blue hair.

Now, had we known the train farce on the way back (landslip between Bristol and errm Bristol), we'd have had time to get some city centre ticks in such as this one below which looks very intruiging and is on my bucket list for 2015.  I do like the West Midlands, you can really tell that they were still into brewing proper ale and preserving old pubs before it became cool.


As some form of consolation, Dad reminded me that we had visited the SHAKESPEARE (552) just outside New Street station a couple of seasons ago.  As a 10am opening Nicholson's, I'm not sure we visited as a guide pub but just somewhere to get warm and have a drink before Old Joint Stock opened.  This was 17th November 2012 before a 3-2 win at St Andrews.  Despite some decent ales, the draughty doorway plus a group of Hens plus a group of bald headed men from Hull stopped us from feeling relaxed (especially Dad) and I never really considered it as a 'pre-emptive tick' (not that they existed in those days).

So, next week sees the a bit of long overdue time off work and Wednesday sees my "city slicker London tour", Friday could see a shock BRAPA tick after a game of golf whilst I am thinking either Saturday or Sunday for the next leg of my North Yorkshire trip, "Outer Northallerton" with four tricky ticks to negotiate.  I will also look to get my pictorial review of 2014 completed soon.  Thanks for your time,