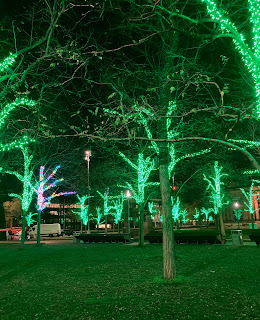 As I ventured deeper into the festive woodland forest, only a covering of snow stopped this from feeling 'exactly' like Narnia.  For the first time since April's 'Outdoor Only' Pub Reopening, the air was icy, the wind bitterer than a pint of John Smith's Armpit, and I'd upgraded to my thickest winter coat out of eighteen options.

But had I have encountered Aslan or Mr Tumnus up here, they'd have had that unmistakeable accent, half way between North Yorkshire and the North East.  Yes, I was in magical Middlesbrough.

A slight train delay at Darlo' left me no chance of making the connecting bus to Guisborough, even though I was jogging, no sprinting, down Albert Road.  My careful planning seemed in vain ..... 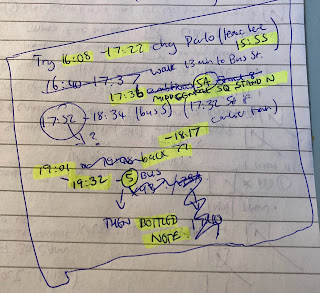 Unless the bus was delayed of course.  Nothing passed me, and suddenly I was at the stop.  Hurrah!  Three other ladies were waiting, shivering.  "Not missed the 5A then?" I asked.  "Nahhh, it's an absolute disgrace, I tell ya, an absolute blinking disgrace!" chime the two old crones.  I turn and exchange smirks with the younger Asian lady, Easington bound,  "Well I'm not surprised, happens all the time, bet it doesn't show, and I don't even really care" she adds with life affirming despondency.

She's not wrong either, twenty minutes later, shivering my arse off, my jubilation has turned to despair, but luckily, the number 5 is on the horizon.  "Disgrace, utter disgrace!" the crones tell the driver.  He yawns, and we set off.

It all means a very much more rushed pint in Guisborough then I'd wanted, if I were to do this comfortably.  GizzyB too, is trying to get into the festive swing, though to me, it looked like the tree had been cordoned off for being a naughty boy. 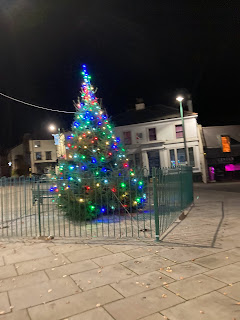 The arctic winds whips up again.  "I wish it was 'otter" says a voice from my bag.  Keane Lewis, back on the Thirsy Thursday trail with me, is trying the type of humour Maltmeister would approve of.

The pub isn't on a hill, but tonight isn't the night for taking care over your photography: 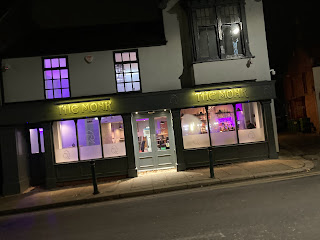 The BRAPA pub theme of the moment seems to be places that are 'done out' in a way that doesn't suit the locality.  Monk, Guisborough (1953 / 3517) is quite a plain, modern type of bar, rather than pub.  Not without some degree of comfort, but not particularly convincing.  An Ember in based in a Premier Inn reception area, if I was being particularly cruel.   All the warmth comes from the people, not literally of course, that could be unhygienic.  But the Dad, Mum and Daughter combo behind the bar are a lively trio with good 'inter-connecting-bantz' that you come to expect from that area south of Boldon, north of Thirsk, on the Eastern side of the country.  The two blokes are similarly welcoming.  "£2.50 for a pint of Cherry Dark, you've picked the right time to come in!" I'm told.  When I reply it is completely by chance, I'm told they'll even throw in a free dog biscuit if I so desire!  I'd not even got KLO out of my bag yet, and Colin, given a free dog biscuit in Layer-de-la-Haye this summer, is not even here.  I realise I've sat beside this 'viewing' window, down to some sinister ancient steps.  What a shame I can't get down there.  The GBG description is useful for a change, revealing this leads to a recently unearthed tunnel used by this 12th century black monk for his nefarious night time activities.  #PubMan.  Wonder if he got on the ESB 7th pint in?  A quick check on Google Maps 'live' bus times shows my return journey is running ahead of schedule!  Must dash to be on the safe side.  Decent experience this, people really do make the difference. 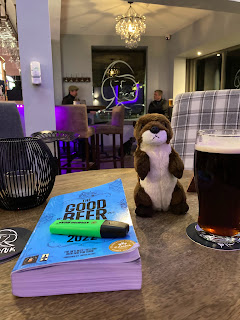 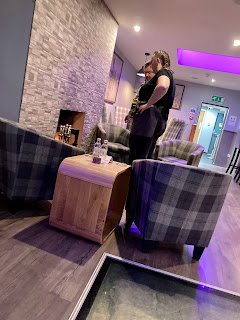 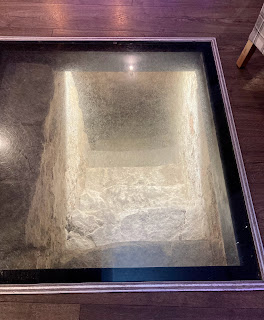 I've found a bus stop a tiny bit closer than the one I hopped off at, and I've barely had chance to position myself when the bus hurtles around the corner!  Way ahead of schedule.  I stick out a long left arm just in the nick of time! 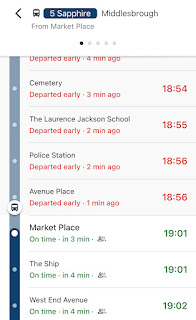 When we get as far as five minutes ahead, the driver pulls into a layby in the middle of nowhere for five minutes and allows time to catch up!

He then rattles on at a rate of knots through the mean streets of 'Boro, where my Dad's Dad and his Dad and his Dad, most of them called Gerald, lived in the South Bank area.

The only place the micropub revolution ever made total sense to me was Middlesbrough.  All those early football days, disappointed or terrified in drinking holes like Doctor Brown's, The Star, Captain Cook and the like, or making do with decent 'Spoons experiences like sitting next to a pigeon fancier with a parmo in Isaac Wilson, or Swatter's Carr who told me away fans were welcome but looked like he was pressing an emergency button under the bar, the filth arriving before my Roaring Meg had even been topped up!

And despite not enjoying my micro debut in the flagship Dr Phil's, I later had a great afternoon ticking off tonnes of the things.  All good quality places and ale.  Homely.  I thought I'd struck pre-emptive gold.  Maddens me how few have never made the GBG.  And now you have this, which wasn't on my radar back then ..... 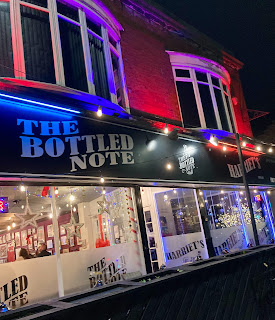 Bottled Note, Middlesbrough (1954 / 3517) delighted me by being one of the best all-rounders of a micropub I've been to in a very long time.  Always best to arrive with minimal expectations, and allow yourself to be surprised.  The atmosphere is pretty bouncy for a freezing Thursday, the smell of takeaway pizza, I'd later be asked if I wished to partake in the pub quiz which may've had something to do with it all, and the little bowls of nibbles being filled up and placed on participating tables by this friendly lady who must run the show.  At the bar, it was one those scenarios where you are always in the way, no matter which direction you twist and turn, but the kind of place where people expect a bit of jostling and "ey up, sorry mate" as normal pub behaviour.  Which in my eyes, is how it should be.  A GBG is propped up on the bar, proud to be in, like all the best entries i.e the ones who care.  My White Rate drank arguably better than I have it in my favourite Ossett pub in York, and the place had proper depth too!  How many loos?  A nice old staircase led to some, and the remnants of some party bedecked with a collage of Hull City balloons.  What a shame Tom Irvin wasn't with me for a photo opportunity.  I'm starting to doubt whether you'd even call it a micropub.  It was all too much for one youthful pub otter. 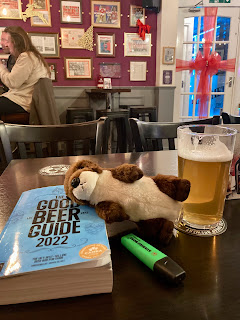 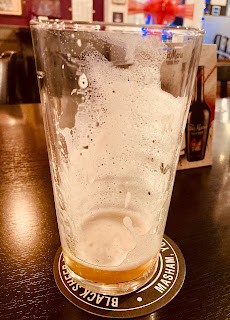 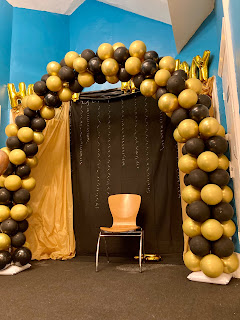 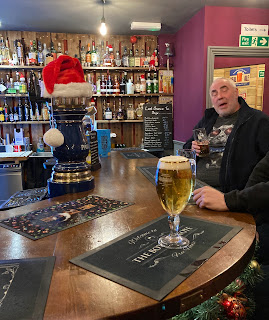 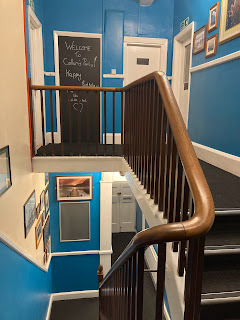 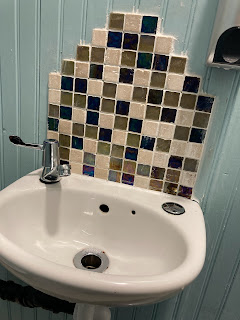 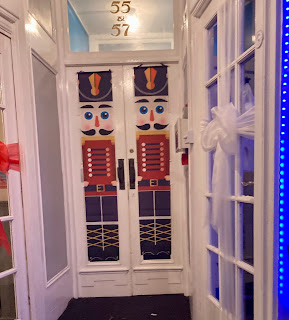 Tonight had been an effort for the sake of two ticks early on, but Bottled Note had made it all feel very worthwhile.  A few more minor delays getting back to York, but not too bad, up to +13 in North Yorkshire.  Running out of NY ticks I can actually do after work on a Thursday, but it won't stop me trying,  and I can always 'push the boundaries' like some renegade artist.  Or I might be getting carried away.

Whatever, thanks for reading, and see you back here tomorrow night for a winter's tale from the Stoke area where we'll meet a new pub hero.  Finally catching up a bit with these blogs.