BRAPA in ..... WUTHERING HEIGHTS & SMOTHERING NIGHTS (From Oxenhope to Leeds)

When Kate Bush wrote her best selling novel Wuthering Heights back in 1978 about these three sisters called Bronte who lived on the hills above Keighley with their no-good vampiric pub ticking brother Bramwell Stoker, it became a smash hit overnight.

Soon, tourists were flocking to said hills, one of the consequences of course being that it allowed pubs to stop being cold one roomed ramshackle farmhouses serving one man and his dog a pint of Fosters and a bone, and meant they could broaden their horizons and indulge in real ale and scotch eggs.

In recent BRAPA history, I've visited the wild windy moors to tick off pubs in Stanbury and Haworth in the depths of winter, and on a similar night, I found myself this way out again, looking for a pub in Oxenhope.

But when I say IN Oxenhope, I actually mean 30 minutes walk out of the village on a pavementless lane in the middle of nowhere, as close to Denholme, which is practically Bradford.

So I wrapped up warm, and started my journey where all the best journeys begin, Keighley bus station. 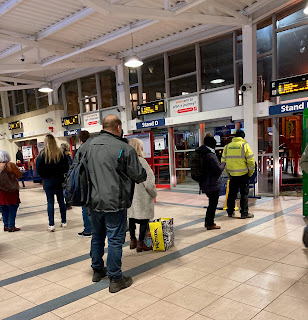 Rather than take a bus to Oxenhope, it was actually quicker (and potentially less dangerous traffic wise) to take the 67 bus, causing the driver great consternation by jumping off at the Trough Lane stop 'twixt Cullingworth and Denholme.  I don't think it gets used a lot.

Luckily, I'd packed my trusty torch, as I walked along the pitch black lane, wind and icy rain whipping in my face.  You don't have to be mad to be a pub ticker, but it helps.  Gloves, hat and scarf were soon on.

I think I only saw six cars (three each way) during the course of this 23 minute walk.  Each time, I stepped up onto sodden grass verges, once I stuck my foot in a stream.  Every building I passed was a barn or some farmers lodgings.  You can imagine my relief when I reached the end of the lane, and the pub loomed out of the gloom, my final act being to wade through a large puddle or was it a flooded road, it was hard to tell even with my torch on.
I salute a waiting taxi driver (no idea why, maybe just relieved to be here) and walk in .... 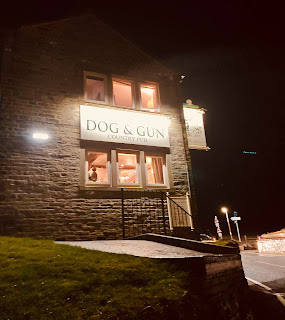 Everyone turns to look at me, I pull my hat off and say 'hiiii' and it might just be me, but it felt like all the locals assembled and the bar, plus landlord and landlady had this sort of trying desperately not to laugh countenance about them!  It soon settles down as I order a very welcome pint of Knowle Spring.  Phew, welcome to the  Dog & Gun, 'Oxenhope' (1970 / 3533).  It is a bit of a curious fish.  I'd say about 40% posh dining pub (the 'reserved' tables, impressive food dominating their Facebook page and strange L.E.D. twiggy things hanging off the ceiling were a bit of a turn off).  But don't be fooled.  It does, as you'd expect from this part of the world, containing a loyal drinkers throng.  I'm told to ignore a 'reserved' sign and plonk myself down.  It has a roaring fire and one end, and the bench seating is red and plush.  A warm and cosy place.  The perfect example of the pub treading a perilous tightrope between pub and restaurant and somehow succeeding is when the landlady puts four wine glasses on the reserved table next to me.  ''Ere we go' I groan to myself, about to start drinking quicker expecting a foodie invasion.  But then, she brings over a dominos board, makes sure it is nice and level, then a set of dominoes follow.  "They've been doing this every week for years, same day, same time" she tells me.  Her hubbie then comes over and asks what brings me here, where I'm headed etc.  It was this final five minutes that won the place over for me.  A rare example of a GBG entry being able to cater for all and making a success out of it. 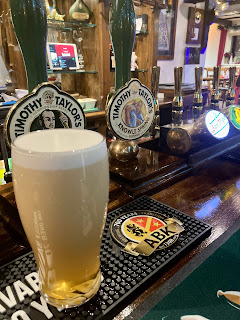 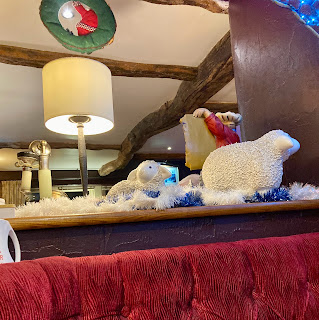 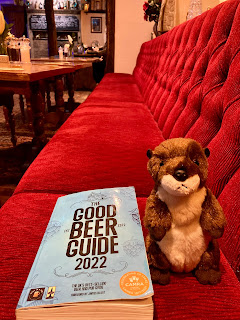 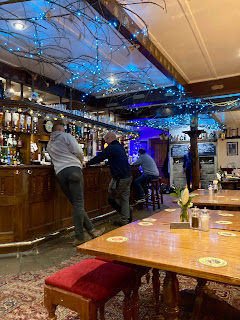 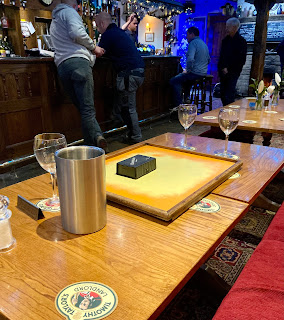 A 25-30 minute walk back into Oxenhope along more pavementless roads (more of a main road, but mercifully quiet at this time of the evening) takes me up to the bus stop next to the Bay Horse pub which I did in 2017.
The bus driver is furious throughout, effin' and jeffin' at all the traffic, he's rattling on a reet pace, no way we are sticking to the schedule.  The one other passenger, a 'please somebody think of the children' style lady, keeps turning around to look at me like "he's a maniac" but she's getting nothing back from me.  And that is because we reach Keighley eleven minutes earlier than expected, meaning I can get an earlier train I had no right to get!  #BusLegend
I feel like it is justice for my earlier efforts.
What is more, one of my three remaining West Yorkshire ticks happens to be in the City of Sin, where I have to change to get back home to York anyway.  Don't you like it when a plan comes together?
L**ds station is looking a lot better these days since I commuted on a daily basis, they've finally finished it, the 'regeneration' works started well before Covid existed and were a pain in the arse.  Despite walking the wrong way up through town initially, I soon remember Boar Lane is right at the bottom.  Ooops!  Told you it had been a while.  It is looking majestic (not like the nearby nightclub of the same name) in the cold Thursday night ....... 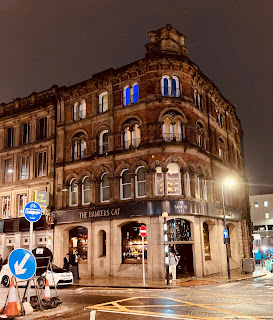 'By gum, Thornbridge have spent a fair amount on this!' is my first thought as I enter Bankers Cat (1971 / 3534) , a nice name, for I am a banker and a big fan of cats.  Well apart from that scratchy thing that lives above a wardrobe in Silkstone Common.  What a fabulous place, large booths, pillars, high ceilings, almost but not quite reminiscent of the Old Bank of England in London I went to last Saturday.  I'd not been expecting anything on this scale, I've been to the York equivalent (Market Cat) twice, and whilst the staff and beer are spot on, and you can sit upstairs and overlook the market, it is pretty 'yawn' compared with the Leeds counterpart.  Thursday has been the new Friday in L**ds for many a year, and it is a young, lively crowd, few CJW's (Christmas Jumper Wankers) and one sullen barmaid who looks like she hates her job is trying to serve a circular bar of many.  I give her a 'winning' smile, order a 'Merrie' (it seems right) and try to get a smile off her.  Her cheek muscles edge up a fraction, but not quite!  I realise I'm quite on edge actually, thinking about my old working life in L**ds, and everyone looks like a sort of 'prototype' of my old colleagues.  There's Knackered Pete D, Housewife Abbie L, Liposuction Jo T, Goblin Alistair B.  A dude who manages to look like both Peter Sutcliffe AND Harry Maguire has positioned his arms in such a way that he's blocking a massive chunk of the bar like Mr Tickle would.  Then the ultimate insult as Shiny Caroline W asks if she can nick my one remaining stool.  Keane Lewis Otter needlessly to say, is terrified.  The beer is Christmas in a glass, and I finally relax, do the satisfying greening of the GBG.  Would've been a shame if I'd not been able to enjoy a pub this beautiful. 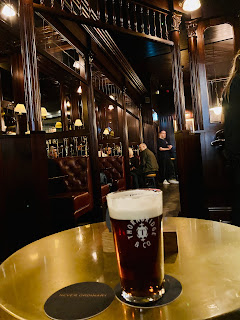 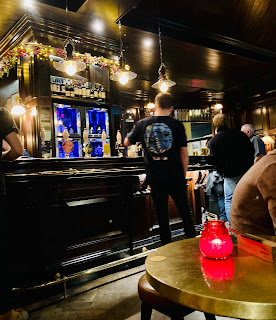 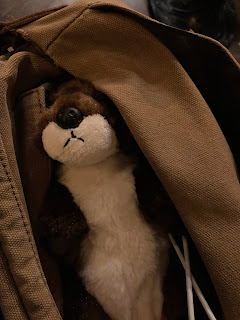 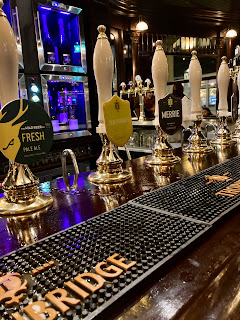 So there we have it!  Two to go!  Actually, I may well have finished WY ticking when I press the 'Publish' button on this blog.
Have a lovely night, or day if you are one of these monsters who doesn't read my blog the second I press the button.
Take care for now, if you're on my Twitter see you tomorrow for the BRAPA Christmas Special.  Otherwise, I'll try and blog again before Crimbo though I'm running out of free evenings!
Si