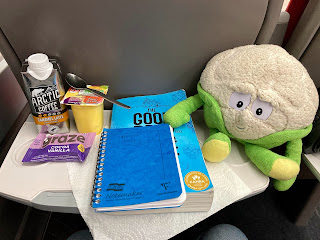 Finally!  A York to London Saturday with no Lincolnshire diversions.  Two hours it took me to get down, I'd forgotten it could be this good.  In St Albans for 09:40am.  My only problem now was the long wait for pubs to open.

Oh well, Snalbans is a cute town to have a mosey around.  And having been twice already in 2021 to tick off their pubs, it seems that they were ready for me third time around: 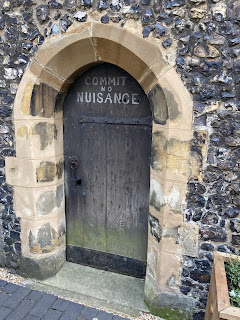 Market stall veg owners shouted at the top of their lungs, as I held on to Colin for dear life.  We'll sell him eventually, but only for a seven figure sum to a Championship outfit.

My Herts progress is going well, though frustratingly, this is my last trip down here until February for which we can blame Christmas, New Year, the FA Cup, LNER, North Yorkshire and Staffordshire.  So I really wanted to make the most of today and get my six ticks.

I stumble into a little coffee shop.  You can't have too much coffee on a pub ticking day right?  Lacks a bit of comfort, but the staff are nice.  One waitress smashes a load of cups.  Nobody says 'wayyyyyy' like they do in pubs.  If there was a physical book you could 'tick' independent coffee shops from, I'd probably do it once I've done the GBG.  More appealing than ground-hopping.
I'm feeling optimistic as I go to join the old crones at the bus stop about 10:30am.  Pretty sure I've spied an 11am opener.  Okay, Google Maps says 12, that makes me slightly nervous, but surely the pub's own website, Facebook and WhatPub can't all be wrong.  Can they?  CAN THEY? 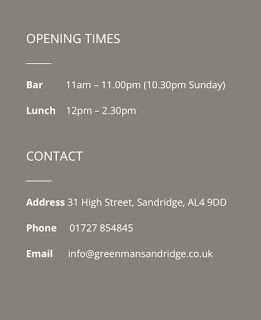 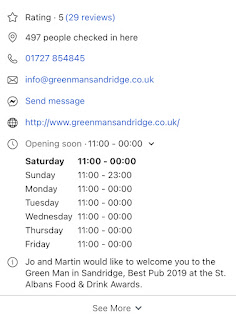 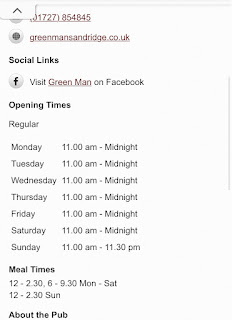 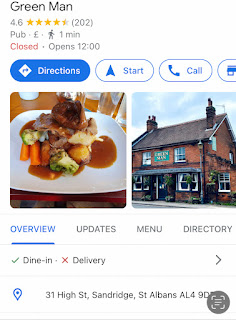 11:05am and still no sign of life at the Green Man, Sandridge. 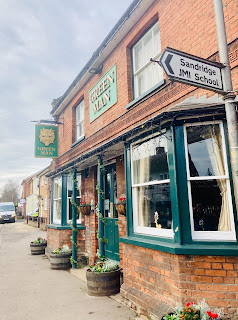 A wander around the village, seems the only things working at this hour in this place are the local bees: 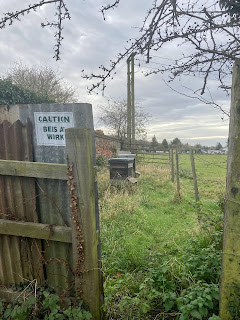 Ten past now, I can see a woman cleaning up in one of those 2020 vintage outdoor marquee things so I knock on the side, she opens a door and I ask when they are opening.  "Noon" is the answer.  I explain the pub website, Facebook and Whatpub all say 11am.  "No, noon!" she barks, and that is that.  I look down at the hole in my jeans, and turn and head away.
Now had she said "oh gosh, I am sorry, we need to address that.  You poor thing coming out here, unacceptable social media maintenance on our part.  I'll feed it back to the relevant parties, and get the three sources you mention updated immediately.  And do not hesitate to have a pint on the house when you do finally call in, if we are have done enough to warrant you returning of course", it would've softened the blow by 1%
But she didn't.  So it didn't.  The blow remained unsoftened, so to speak.
And yes I'm aware after this weekend's events, I sound like a serial moaner, but I wrote most of this on Friday, jeez December pubbing eh?  Might take a Scottish football style 'winter break' in 2022.
Softening the blow by 0.1% was the fact that I could walk 40 minutes to the next nearest rural outpost during this 11-12 window.  And I didn't even have to walk along the road.  It diverted off to a nice country pathway, with some nice views, and some weird oldies doing a cross between a pagan ritual and some aerobics.
Like I say, it made me feel a tiny bit happier ...... 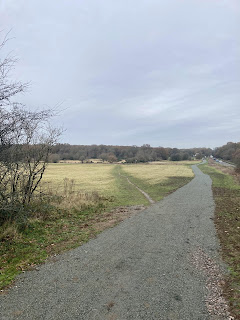 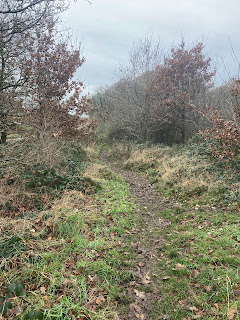 Don't trust the Good Beer Guide re this next entry.  That would be my advice for anyone attempting it for the first time, despite the fact that we are immersed in their spiritual heartland of Herts.
We'll refer to the map from earlier ...... 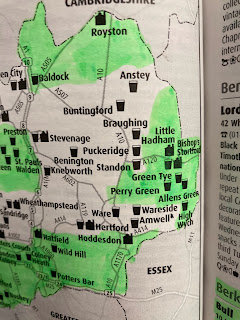 Note 'Amwell' plotted here just south of Wareside.  This is wrong.  The pub in question is actually between Sandridge and Wheathampstead - see the far left hand side and tiny asterisk.
I think the confusion has arisen for two reasons.  South of Wareside, there is a 'Great Amwell'.  And our pub is situated on 'Amwell Lane'.  'Amwell' though is a made up place, it doesn't exist.
The fact that there was a carpark and bus stop near here called Nomansland shows you the struggle CAMRA has in giving the pub a 'home'.  Under Wheathampstead maybe?  It is walkable.  Under St Albans?  That is the official address, but further out than Sandridge.  Maybe 'Nomansland' or 'Amwell Lane' (as Durham used to wrongly do with 'Hamilton Row') might work better?
Just a thought if anyone is still awake.
I'm sorry.  How long is this blog gonna be before I finally get a blinkin' pint?   I'll just write about two pubs in this part, you've suffered enough.
The pub finally can be seen nestling in a hedge.  I thought the road sign was instructive too. 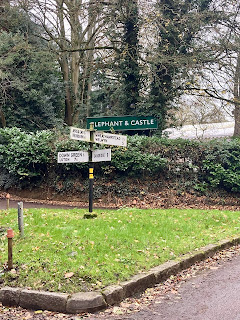 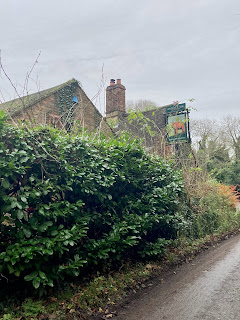 It is still only 11:50am, so I perch on a wet bench in the pub garden, which has a wigwam.  A bloke disappears into and never comes out.  Maybe it has a back exit?  Two families have just pulled up in cars, but it seems that they are using this pub carpark as the start of a country walk, and they eventually disappear down a path.
At 11:59am, I see a shadowy figure by the door.  Probably the Grim Reaper knowing my luck this morning, so I go and 'apply some pressure'.  The door springs open, and a #PubFamily stare back at me.  "You open yet?" I simper.  The Dad looks up at the clock, it chimes noon with a big dong (where's Russtovitch when you need him?), and he says, in a kind of Eastern European Kenneth Wolstenholme style "We are now".  Bloody 'ell I need a pint! 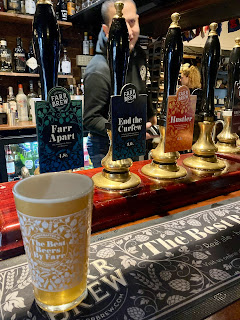 Elephant & Castle, Amwell (1972 / 3535) and after surprising them by saying I'm not here for food (which seems to be the exception), I'm lead down to the lower bar and presented with my second ever pint of Farr beer.  I'd been impressed with it in Slip End's Rising Sun, but despite the fact I was thirsty as a Sailor on a Thursday, I couldn't get on with this beer.  Kept well enough, just a bit light and nothing.  The pub itself is not too far off from being the perfect, atmospheric, rural getaway.  It has age, character and is a pleasing shape.   And yet, it struggles to convince, even before the dining masses arrive.  Few too many people leaving draughty doors ajar, bit excessive on the Christmas decor front (and I'm no Scrooge, I love this season to a point!), shit poppy loud piped music, plus this average pint.  When a pre-booked dining group arrived, the female members of staff suddenly come to life with high pitched 'hiiiiii's'.  What I did like, the landlady asks if they are real fans?  "We'll have two apple juice, two mulled wines and a lime and soda for Dad cos he is driving".  I think that was no.  The landlord chats to me a bit more on the way out, as I wrestle with the bane of my life, my double-zipped winter coat, and you know, it isn't 'farr' off being a decent pub.

It is only a 15-20 minute stride up into Wheathampstead, a proper town with stuff going on, which is mad considering how rural this had all felt.
Our next pub has more Farr Brewery emblems adorning the windows ...... they are takin' over the world like a Rural Herts Brewdoggery! 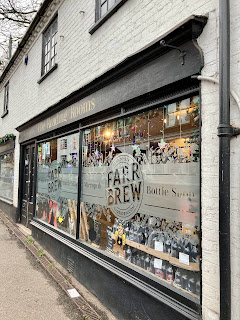 A patient wait was required at Reading Rooms, Wheathampstead (1973 / 3536) with no staff to be seen in this tight little bar area, and an old bloke looking at this watch, it was obvious I was in a queue of sorts.  A large group of well fed students have been catered for, and are sat down discussing how HS2 will benefit them more than young people from Oldham, and the kind of other things mid Herts kids talk about.  Being a 'reading rooms', I browse a 1955 school annual, then a 'clump clump' of footsteps and an out of breath landlady races through, apologising to me en route for the delay.  Old bloke says nothing, but gets presented with a pint of lager.  He grunts, hands over coins and walks off.  Oh to be a pub local!  Something I will never get to experience, only marvel at.  I perch on a far leather seat for a while but am not convinced.  A trip to the loos changes this, where upstairs lies a curious broom cupboard with bog which surely Ed the Duck and Andy Crane would approve of (where's Wilson the Butler to wipe my arse?).  An empty but more pleasing seating area.  A bit like the Bursley Ale House, with nicer people, is my lazy conclusion.  Not enjoying my Farr Christmas special, Brewdolph, well kept, strong, but poorly executed (listen to BRAPA, the master brewer!), in my opinion anyway.  Farr are rapidly becoming a brewery I wouldn't turn to in my hour of need.  It is a tough drink, and as such, am in danger of missing the bus.  But not quite, next stop Harpenden.  Which I'll tell you about tomorrow.   For now, I'll leave you with the photos wot matter.  Cheers! 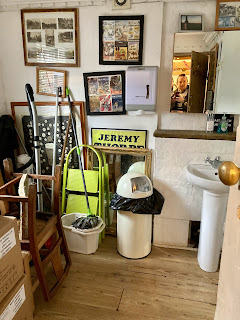 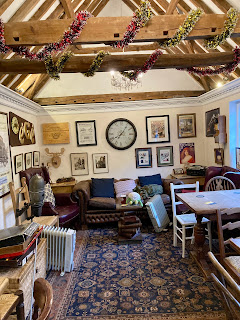 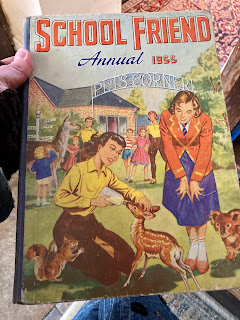 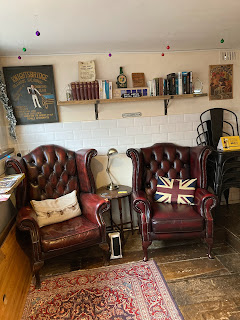 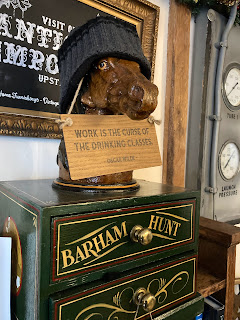 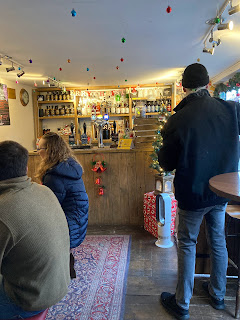