BRAPA in ..... TRULY, MADLY, CONONLEY (Thirsty Thursday by the Seat of Your Pants)

Sometimes, post-BRAP, you just have to lay back on your pillow the morning after, take a long drag at your imaginary cigarette because you don't smoke, and reflect on one of the most exquisitely executed BRAPS ever.

The Thirsty Thursday quest to do as much of North Yorkshire as is physically possible when you finish work at 4pm in York was, I must admit, running out of options.  And tonight felt a lot more like a West Yorkshire night.

Changing trains at L**ds, I was soon on the Skipton Classic, calling at all those places we remember from BRAPA nights of yore, Shipley, Saltaire, Bingley, Keighley.

I jumped off at Cononley, with an ambitious three pub aim in mind.  And I nearly fell at the first hurdle.

Step one, to walk to the end of the lane and catch the 66 bus.  13 minutes I had in theory, a long lane, but it should've been achievable.  But what I hadn't allowed for, the level crossing was down for a good 3-4 minutes and with no footbridge, all I could do was wait.

Once it was back up, I strode on behind a similarly quick walking lady, hoping she didn't think I was a serial killer.  Time was against me, and it was only because the bus was one minute late that I caught it.  I stuck my arm out just in time.

"Corrrr, and you are only going one stop!" says the driver.  "Yeah, but it would be a tough 18 minute along this road, and on a tight schedule!" I reply, feeling the need to defend myself.  I can feel the passengers angry eyes boring into the back of my head as I soon press the bell and hop off again.

A decent meander along a winding lane to the village of Bradley, which might well be picturesque in the daylight, takes me to pub 1.  The air is icy, but local dog walkers are chatting in the street blocking my progress.  Every second counts.  Bradley smells of nutmeg strangely.  I've never known a village smell of nutmeg before. 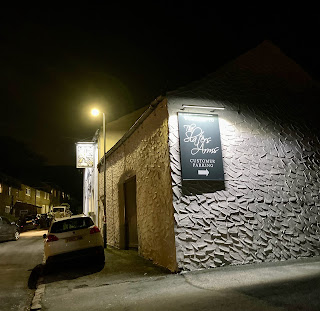 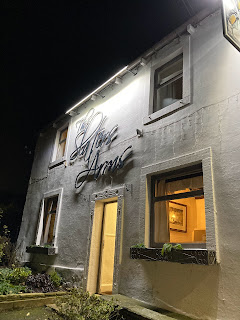 The swirly font had gastro-doubts forming in my mind as I entered Slaters Arms, Bradley (1961 / 3524) but I needn't have worried.  As with most places within spitting distance of Keighley (the national spitting capital, I once heard - a BRAPA fact) it was just a good honest Timmy Taylory pub with good old fashioned 'ospitality courtesy of the impressive landlady and three local #pubmen at the bar. "You been out walking?" she asks, hearing my out-of-breathness and seeing my rosy cheeks as I make a beeline for the fire and say 'oooh I need that!' After she wonders why anyone would spend their whole life escaping York's beautiful Christmas Markets to come to places like Bradley on a winter's night, I cause her further consternation by saying I'm travelling back this very same night.  She is burning her empty Amazon Christmas boxes for kindling on the fire, it all feels a bit temporary.  Far be it from me to 'fire-splain', she really needs to get a seat of heat going.  Cardboard won't do it alone!  The Ossett Yorkshire Blonde is drinking well, and in a move reminiscent of the Flower Pots in Cheriton, the locals are talking about how a ginger horse is getting cockier by the day and standing in the middle of the road, unafraid of traffic.  Of course, I make a fool of myself walking the wrong way to the Gents, but them's the BRAPA breaks. 50/50 loo decision, you're always gonna choose wrong.  Nice pub, but no time to linger. 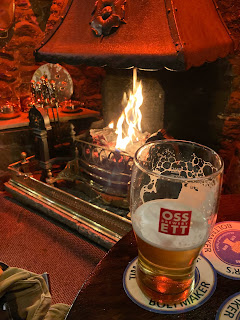 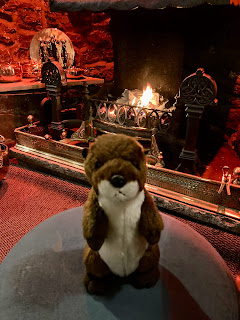 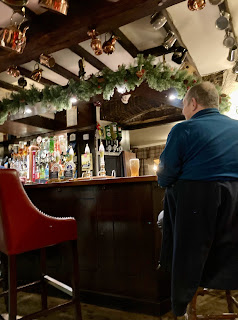 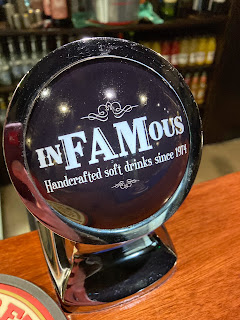 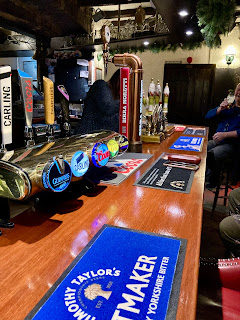 Luckily, the icy pavements meant I slipped, slided away to the bus stop in record time, easily in time for the 18:41 rather than the 18:51 which SHOULD afford just enough time so I'm not rushing pub two.

My next challenge, getting the bus to stop.  Proper pitch black busy road, bus stop not lit.  Luckily, that Winter BRAPA Kit essential, the pocket torch, had been packed, and as the bus approached , I shone it under my chin.  I've not done this since I told a ghost story in '93 to my family about a possessed funfair in Preston.

The bus driver even commented how much the torch had helped, it is a trick I learned during winter Cumbrian pub ticking a couple of years back.

Yet my worries STILL weren't over.  When we hit Cross Hills, we got stuck in a traffic bottleneck through the centre of town.  So frustrating!  I was already against the clock.

It reminded me of a Yorkshire version of Marazion.  The so called prettiest place in the UK in a recent survey, but for me just a Cornish tourist pain in the arse not designed for buses, slowing you down from having a full hour in Helston or getting your bladder relieved in a timely manner.  Never believe what the 'experts' tell you.  Marazion.  No.

The bus eventually pulled into my destination eight minutes late, this would be seat by pants pint drinking if I was to get the hourly bus back to Cononley. 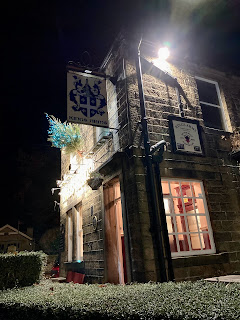 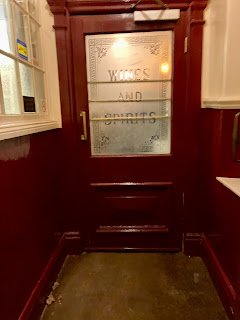 And what a shame I had to rush because King's Arms, Sutton-in-Craven (1962 / 3525) was a gem, make no mistake.  I fought my way through the old blokes lining the bar, some on crutches, some on zimmers, some just limping, but no one had two legs that worked perfectly.  That set the tone.  I was served without fuss and some quick photography with my pint in the foreground (so as to look less conspicuous) had a local chap half agreeing with my assertion 'there's nothing better than a photo of a great pint' although the truth was, photos of the wider pub and locals was my true goal here.  He eventually said "I tell ya what's better, a photo of your second pint ho ho ho".    The bogs were outdoors, that is when you know you are in a proper boozer.   And I just sat with a kind of wide-eyed joy, staring around the rooms, drinking as quickly as I could so that I didn't miss the bus, but also trying to create the illusion of having a very satisfying unrushed 'swift one after a hard day's work'!  Did it work?  Doesn't really matter, I'll never be back, more is the pity when it comes to pubs right up my street like this one. 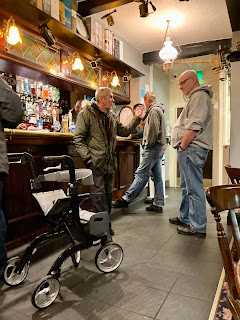 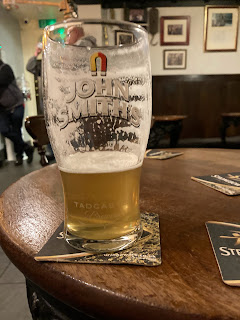 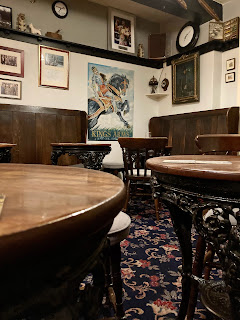 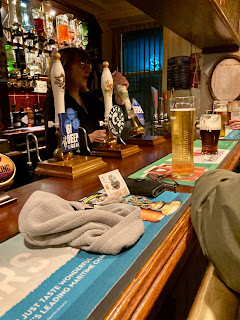 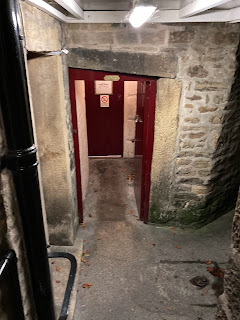 I rushed around the corner to the bus stop, with quality ale still sloshing around inside my gut, I even had a minute to spare, so in a move akin to showboating, I took a photo of the other pub opposite as I waited. 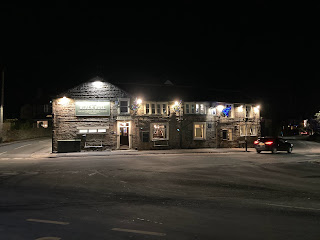 This bus journey back to the end of Cononley lane cost only £1, bargain!  The Cross Hills mayhem had ceased, and I felt that I'd now done the hardest part of the evening.

Despite more time to kill in pub three, I couldn't quite rest on my laurels as I walked back towards the centre of Cononley, that bastard level crossing was down AGAIN!  And knowing I'd have to cross it again to get to the L**ds platform, I couldn't afford to leave my departure from pub three, or the crossing would be down again, and where would that leave me?  Stranded for another hour, and on the wrong train, that's what!  (I was accidentally on a fixed ticket for the saving of about £3, hardly worth it).  WHY IS PUB TICKING SO HARD?

Five minutes painful waiting later, the level crossing flipped up again and I speed-walked through Cononley which smelt strangely of garlic mushrooms tonight, a nice contrast from the nutmeg of Bradley. 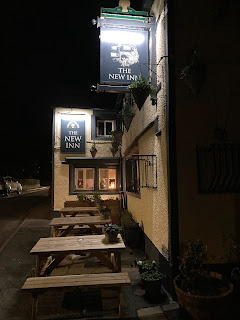 New Inn, Cononley (1963 / 3526) was like a slightly more palatial version of Slater's Arms.  It was larger, had a slightly hotter fire, a slightly louder landlady, three local men slightly quirkier in their chat than their Bradley counterparts, slightly plusher carpets and surrounds.  Yes, it was like everything had just been dialled up a notch.  Not sure what was up with my phone but as I ordered this delicious Tim Taylor chocolatey stout, I managed to phone back two cold callers from earlier this afternoon.  One call centre bloke even picks up and is like "'ello 'ello" and I have to tell the landlady that I think my phone is deliberately trying to get me into trouble, unless Keane Lewis Otter, getting increasingly tipsy on three pints, was playing tricks on me.  A local is telling his mates about a problem with his 'big gable end' but breaks off mid flow, luckily, when he notices the Santa on the hearth is melting!  "Oh yeah!" says the landlady, like someone who has witnessed so many melting Santa's during her years in the trade, it isn't really news anymore.  I leave the pub three minutes later than planned (second toilet trip) but am still confident re trains.  Worst case scenario : come back here for another, maybe spend the night on a pub bench, hardly terrible is it? 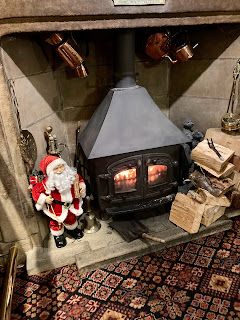 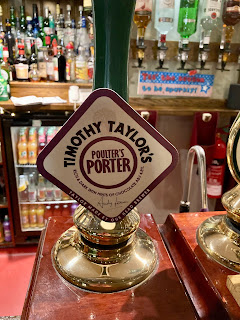 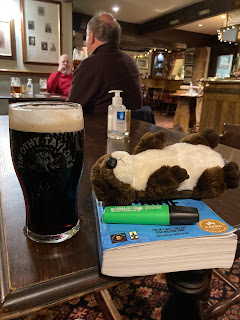 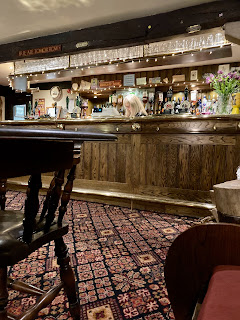 I skid quickly back towards the station, and I'm not at all surprised to see that, for a THIRD time, the level crossing is down.  Seems the train before mine is two minutes delayed.  That now means only six minutes to my train, and slight panic sets in.  They might not consider it worth raising the barriers again for me to get across!

Thankfully though, they come up, for all of TWO minutes, as they go down four minutes before my train is due to depart.

Phew!  I could get into this trainspotting lark.  High octane stuff.

From this moment on, I finally can relax as the train takes me back to L**ds no further problems, apart from the lack of a working toilet.  Then onto York, job done, the plan as outlined before I'd set off had actually worked perfectly, despite the constant anxiety along the way.

Three more North Yorks pubs done, but not a lot more I can get to on cold dark December evenings now, so we'll move into West Yorkshire for the forthcoming Thirsty Thursdays.  See you there!  And before that, I'll try and tell you what Central London is up to these days.

Cheers for reading, it felt frantic reliving it.  Si