EIGHT new BRAPA pubs ticked in the month of November, and if we were to try and put a positive spin on that, we could note that it eclipses my total for March, April, May AND June combined (6).

And yet November's second lockdown felt more painful than the first.  Any novelty factor I felt in March was gone, cold dark nights, and that sense that it was little more than a token gesture anyway.  Frustration too, the 2021 GBG had officially been out for one week.

We need a pub of the month to push forward into the 'year end awards' which will probably be the next blog I do, late on 31st December amidst the Scunthorpe Party Poppers for one and dreadful Jools Holland.  The best beer was at the Aldwark Arms in rural North Yorkshire, the best pubbub (pub hubbub) was found at the Bishopthorpe Sports & Social Club, but strongest overall was the quite unique Disappearing Chin, Harrogate so good on 'em, especially as when I walked I thought 'what the bloody hell is this dark insanity all about?!" 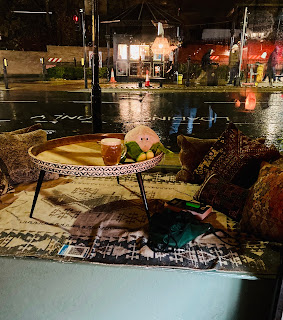 So, we come out of this Lockdown on 2nd December, so Wednesday.  Even though in York, I'm one of the few Northerners privileged enough to come out of it in Tier 2 rather than the strict Tier 3 (AKA every pub shut), it doesn't make a great deal of difference from a BRAPA perspective.
For Tier 2, unlike before the lockdown, you have to order a 'substantial' meal if you are to order a pint in a pub.  This is the real killer.  As you might know if you read regularly, BRAPA is a 'smuggled bag of mini cheddars there', 'bite of sausage roll and cherry tomato when staff aren't looking here' kind of operation.
Six pubs a day, can't be dicking about ordering a meal in each, can I?  Maybe I'm not hardcore enough.  They have to bring the meal to you as well, so I can't just say "donate it to the village tramp" if tramp is an acceptable term in 2020, probably not.  Homeless Solutions Expert, or something.   What about taking six Tupperware containers around with me and scraping the contents in.  Slosh 'em all together in a pan when I get home, massive fry up with a bit of fresh cream, late drunken supper.   You need that after an ESB.  Oh hang on, Parcel Yard nearly forgot, that's a seventh meal isn't it?
No, think of the expense, and trouble for the staff if you're just going to push the food to one side.  In the Pub Ticker WhatsApp group (yes, such a thing exists), someone today had heard a Scotch Egg could perhaps constitute a substantial meal!  Intriguing.  But I'd need by Good Scotch Egg Guide to know which GBG pubs have Scotch Eggs on the menu.
Tier 2 ticks might work better for those pub tickers in the Autumn/Winter of their careers, not myself who's a little spring lamb still.  Imagine the scenario, you've 'pinked' up Wiltshire in full, save for one posh rural dining venue, Michelin star at that.  It is in Tier 2. "Get in the camper van" you tell your long suffering pub wife.   "I'm treating you to an expensive slap up meal and overnight stay at a particularly beautiful looking place in rural Wiltshire."  "Oh what a delightful husband you are!" she trills with joy. Winner winner Michelin dinner.  You get to pink up Wiltshire, away trip for both to the break 2020 monotony, gorgeous countryside. Jobs a good 'un.
Tiers for Jeers
In advance of the Tier announcement, I'd been sent a list of each part of England and how many recent Covid cases they'd had.  Now, I've been focussing on Essex recently and out of 315 areas, Maldon was 309th and Colchester 306th so was thinking they were Tier 1 bankers and BRAPA could carry on largely unaffected.  So what a shame!
Only Cornwall & the Isles of Scilly (310th) and Isle of Wight (313th) were placed in Tier 1.  I bet Mid Suffolk (315th) were spitting feathers, but then again, Hull (2nd) played Ipswich in the interim so maybe they got pushed upwards after Hull breathed on them.
So Tier 1 ticking then?  Transpires Cornish folk don't want the English in at all.  Even less than usual!  NOT that it is that easy to get to from York for a day trip.  Doesn't the fact I've been drinking their tea all month make me an honorary Cornishman? 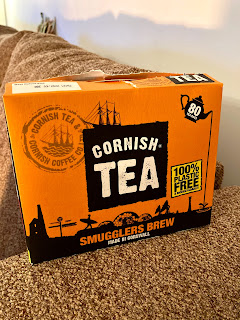 As my work chum Emily suggested, I could've renamed it CRAPA (Cornish Real Ale Pub Adventure), alas it looks not to be for the month of December.  Isles of Scilly?  Only 1 GBG pub, not much point.  Isle of Wight?  Hmmmm.
Look, I don't want you thinking I'm waving the white flag and admitting defeat, it ain't the BRAPA way, but even if I do go somewhere, I'd be very careful how much I advertised the fact on Twitter / blogs until the dust settles and the world is a bit less fraught.
Anyway, BRAPA should be Tier 1 in that everything within a few metre radius of me is considered Tier 1.  Think I do this for a pub ticking malarkey as a hobby?  Cos I enjoy it?  No, I do it solely for your entertainment, so you can judge me and laugh at me.  It is a public service, and the government and health officials need to recognise it as such.
So unless the Tiers are revised on 16th December, meaning a mid-Essex trip is back on the cards for Sat 19th , I'll next see you for my usual drunken year end review.
Ta ta for now, and a very merry Christmas if I don't blog til then!  I'll be mostly drinking red wine, eating Wotsits and watching Westerns.
Si 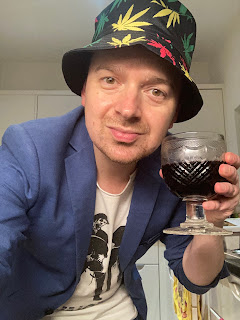