Friday 30th October, and I was toying with the idea of my first BRAPA after work pub trip since (checks spreadsheet) a 31st January trip to Sheffield.  Despite an all round lack of motivation, I had a nap, decorated my flat in a Hallowe'eny way cos I like my traditions, and stepped out into what felt like quite a charged atmosphere in York. 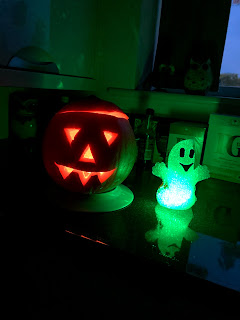 Unaware of the 'pub closure breaking news' that would hit the following morning, the decision to make this trip seems even better with hindsight.  Actually, I'd attempted the same journey the previous Friday only for Hull Trains to cancel the service *pretends to be shocked* and I gave up on that occasion.

Once in Selby, I got wedged behind these two slow walking young ladies on the narrow pavement, could not get past (I could talk about wobbly bottoms but don't wanna be hit with a sexism charge so I won't), and had to follow them all the way to the first pub, which they also went in, even achieving a BRAPA cameo role ...... 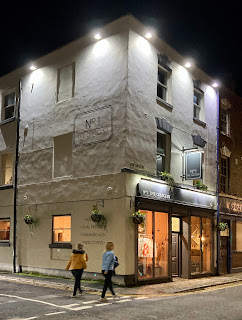 Looking like a desultory piece of supermarket bought Lancashire cheese from the outside, No 1 the Crescent, Selby (1707 / 3134) offered very little for the pub purist indoors.  Shabby chic style exposed brickwork, ducts and pipes up top, a table cloth reminiscent of a Subway sandwich wrapper, a swing you could sit on, wooden Pret a Manger style benches, whichever market they are appealing to, it sure as hell ain't me!  This building actually used to be the Albion Vaults pub, now that sounds boozery and I'd be interested to know just how different it is.  I repeated my 'Mawson's of Southend' trick of wandering towards the bar, getting noticed, and then doubling back on myself to a table, from where I peer expectantly at staff from a distance.  Okay, so it makes me feel like a dog wanting to be taken out for a walk, but seems to work.  A few young couples were scattered around having burgers and nachos, but the atmosphere was generally as drab as the decor.  Solace came in the form of a magnificent pint of Old Mill Blonde Bombshell.  Like a low key Sam Smith's with nice owners, I've been to plenty of their houses mainly in the South York area, their beers are superbly old school, I used to say 'bland', but as my tastes mellow & mature over time, and you realise the Raspberry Ripple Mistletoe IPA was for Christmas, but not for life, you start to appreciate the joy of a beer like this, however incongruous it felt in these forced trendy surroundings.  Nevertheless, I must say I was glad when I stepped back into that almost fresh Selby night air. 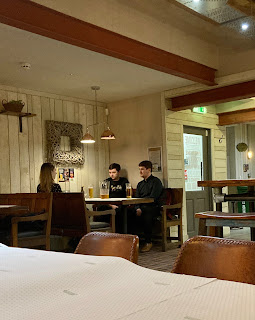 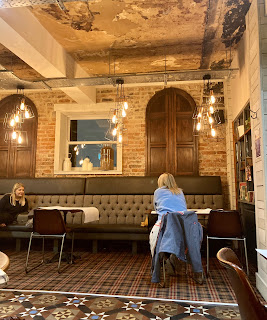 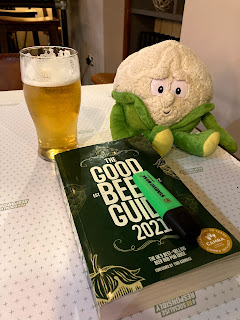 I should also note that this had been the 'first official tick' of the 2021 Good Beer Guide, with the release date having been the day before.  So with embargo now lifted, I could finally put the book on the table and highlight in clear sight!

About five minutes walk from here, probably not even that, Selby had a second new entry to sample, I really was being spoilt tonight.

Selby & the GBG hasn't been a great experience for me in recent years.  In the only other other two Good Beer Guide entries, the Giant Bellflower Wetherspoons, and last year's dreadful Nelson, I had a pint of vinegar in each.  My only other pub experience, a non GBG pub called the Cricketers (Sam Smith's) was fantastic. 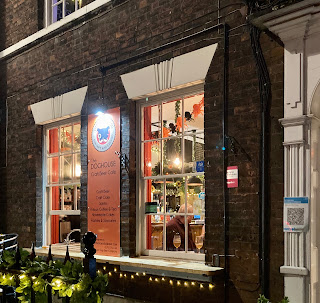 What struck me firstly, and most prominently, about the Doghouse. Selby (1708 / 3135) was 'LIFE'.  Vibrancy, noise, colour, happy laughing faces, bar staff singing.  It crystallised in my mind just what had been lacking at the previous pub, had I been in any doubt.  'Have I booked?' Don't be silly, so I have to perch in the main bar area on a stool which means I'm more leaning than sitting, the angle of my stance suggests 'accidental male prostitute'.  The dog theme, botanical feel, gin menus and signs like 'embrace the haze' meant it was always going to be an irritating place, but you can't deny the efforts to create a happy atmosphere to potentially get wrecked in.  Second great pint of the night too, it wor from Barnsley this time.  When Under Pressure by Queen and that strange dead bloke came on, it was treated to a full-on karaoke session by the staff.  I've never rated it as a song personally.  A lady near me was encouraged to have a taster of many different ciders, but painfully aware she should be 'masked' when stood up, but couldn't be masked to drink, it was up and down like a bride's nightie.  Now that's one song that should've been given the karaoke treatment.  Doghouse also have a pub in Castleford and a Brewery Twap just north of Snaith which must be decent pre-emptive shouts for 2022.  I feel like my blog has been strangely informative tonight.  You'll make a Chris Dyson of me yet! 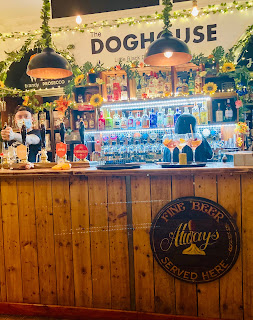 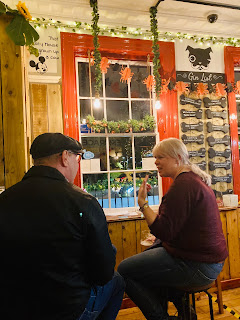 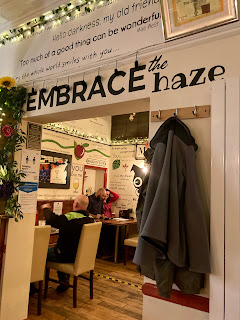 So, there we had it.  My best Selby experience to date.  No time for any late night heroics, as we had the now traditional 7:38am start for South Essex the following morning.

Join me for tales from Rochford tomorrow evening.