Breaking news as I travelled down to London from York on the morning of Saturday 31st October (Hallowe'en fittingly).  Rumours were circulating that a government leek (not a cauliflower) has announced a second national lockdown is imminent, shutting English pubs for the next month.  Nooooo!  The new Good Beer Guide had only been out officially for two days.  I didn't want to believe it, but best to get totally rat arsed today just to be on the safe side.

From King's Cross to Liverpool Street, and then onto Roachford, sorry Rochford.  I always imagined it would 'pair well' with Southend, but last week, I had enough to go at so it was back down today, with Dad & Tom unable to make it to Swindon, which had been the original plan.  Tom's Mum has a Hallowe'en birthday, there's a joke in there I'm not brave enough to make!

The best pubs are just effortless aren't they? 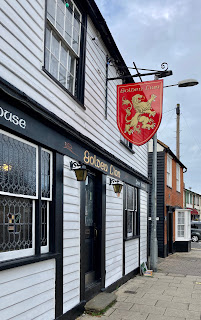 Golden Lion, Rochford (1709 / 3136) decided to make a late bid for BRAPA pub of the month, not bad with 53 to choose from, and finished about 3rd or 4th all things considered.  Paying for my drink felt reassuringly like olden times (i.e. 2019), he even says "you're not getting a card out are ya?" to which I tell him I have back up cash, which is good, cos their machine is broken.  As I sit down, Elvis bursts into life (not the real guy, though if he is alive, here would be a good place to start checking) nearly giving the old bloke next to me a heart attack.  He is frail, I'm terrified he'll keel over and I won't be much good in a first aid situation.  84 years old, he tells me.  I'd have guessed 168.  He tells me he's had new lease of life from a cataracts operation, and from the number of 'locals' finding out where he lives, checking up on him, bringing him food parcels.  Heart warming stuff, excuse the pun.  He tells me he'd be lost without his daily walk to and from the pub, and I can't bring myself to tell him the news I've heard this morning.  "What gets said in this pab stays in the pab" says the guv'nor at one point.  He's never heard of pub blogging obviously.  The two cheekier blokes are at the far side of the room.  One speaks about facemasks in a way I've heard before ".... They are like balaclavas.  Walk into a bank in old days with one on, they'd fink you were a bank robber.  Walk into one now, they don't bat an eyelid".  "They would with a face like yours!" replies the guv'nor.  Hilarious at the time, but under closer scrutiny, does it make sense?  As the other slower bloke asks when Hallowe'en is, it is time for me to go.  The old guy tells me he remembers working in my next pub when he was a lad, but it was in a different building back then, which means a required GBG revisit for Duncan if he did it in the inter-war years.  Top characters, and an ambience to match. 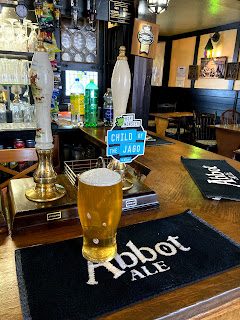 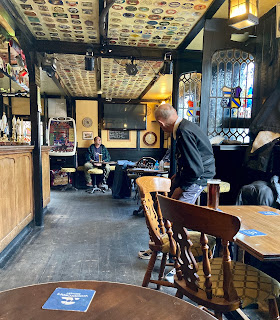 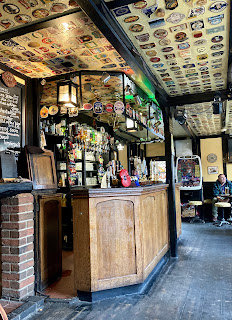 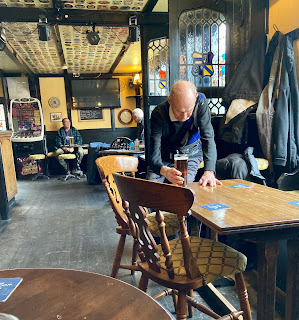 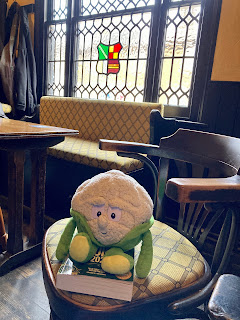 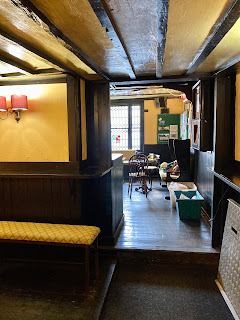 Where's this heavy rain come from?  It was dry when I entered the pub.  A fleet of taxis in what Rochford probably considers a market place will do me nicely, with it still not quite 12 noon, and a month long shutdown most likely meaning I'll have spare dosh burning a hole in my pocket!
Taxi driver is a right chirpy chappy.  And when we approach this slightly rural dining backwater, and water is the word, he spies a couple going in with two dogs and tells me "he's a lovely knowledgeable bloke, tell him Steve says hi".  Flippin 'eck, so now I had an extra task in addition to all of the 'going into a pub in these strange times' rules! 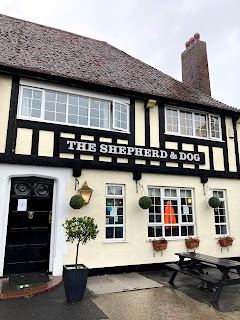 Shepherd & Dog, Ballards Gore (1710 / 3137) was a fairly plain, laminated floored, spaced out dining pub, but you could at least feel some history and happiness within those walls.  I immediately find myself on the adjacent table to Lovely Knowledgeable Bloke (LKB) and his Art Garfunkel like sentient hair do, so I tell him what the taxi driver said, and luckily they know the Steve I'm talking about!   Being sat on Table 13 on Hallowe'en in a place with GORE in the title, was never likely to bring good luck, and my 'relationship' with the younger barmaid proved difficult throughout.  It all stemmed from me trying to take a panoramic shot of the bar, from a good distance, but she looks up at the wrong time!  Now I know what you are thinking, 'Si you got form for unwise, invasive photos', but I've been a lot more sensible and discreet in recent years, and this really was bad luck, believe it or not!  She looks at me throughout in a very accusatory way (no words are said but I deleted pic in guilt!) and later she asks if I want a menu, I don't hear properly, she brings me one, then I say no I'm not eating.  That wastes her time.  Then, she tells me I have not signed in.  I have to assure her I did, luckily older barmaid who seems to like me, can vouch.  And then I nearly bump into her on way back from loo, head on.  Oh dear, just one of those situations!  Luckily LKB is proving to be lovely.  He stopped his car to give an old man an umbrella due to the heavy rain, but the man refused and "grumped off".  On seeing my GBG, he tells me he dabbled with pub ticking once, Devon in particular, but found it hard going.  Definitely not a 'beginners' county is Devon!    A knowledgeable man should know that.  Why is 'Walking on Sunshine' blaring out of the speakers with no irony?  The rain is still teeming down.  Speaking of which, LKB then spots someone's car windscreen wipers are going full pelt (I unhelpfully suggest they are possessed due to the time of year) and there's a quick poll of pub inhabitants to find the owner.  Proper Good Samaritan.  But I've got a bus to catch, and they've got their lunch to eat. 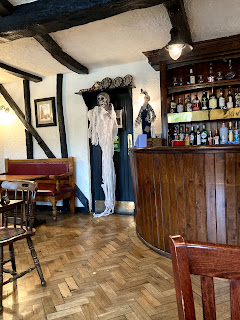 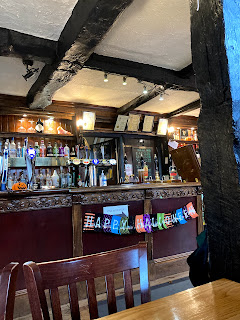 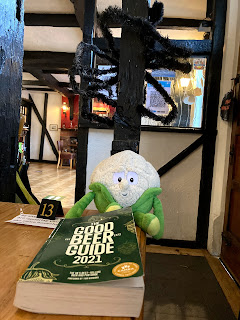 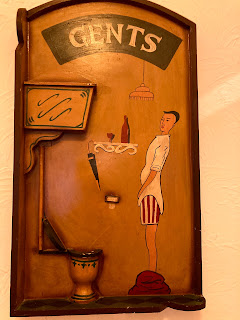 Well, I've run out of time.  We are past the 9pm witching hour, I've got things to do so I'll call it a night for now, and join you Wed or Fri for a longer part 2 (I seem to be strangely busy considering we can't go anywhere at present.  Nearly done my Chrissy shopping mind!
I waited for a bus at the stop, not shelter sadly, and jolly lady in a van kept passing me, waving, smiling, splashing me with a puddle, turning round, and then doing that on repeat until the bus mercifully showed.  Back to Rochford!
Cheers, Si