Thanks to Steve Halstead for the blog title idea!
Knaphill might've been a bit weird, but as Ed drove us to his GBG local, a more assured, confident air fell across his features.  He was confident that I was going to enjoy this one ......
When you hear the oft-used pub phrase "it is like walking into someone's front room", it isn't usually a comment on the pub itself, but rather the people, like you have disturbed them from doing their private family stuff.  An intruder in their midst.    It was a bit different here at the Crown, Horsell (1775 / 2992) which literally felt like being in someone's lounge.  It looked a bit like a pub, but there was something unashamedly unpubby in its decor/ design.  I couldn't quite nail it.  It shouldn't have worked but it did.  Easily better than the Knaphill duo.  The acoustics were insane.  Sound just got stuck in the thick carpet.  Ed knew the drill here, this pub had a 'system' where you order your drinks from the first bar, and then carry on around the perimeter of the bar, where you pick them up and pay.  The younger barmaid around this side remarked how much the hand sanitiser smelt like vodka, which might well have explained her lively slightly wired persona.  I tried to join in, but the overriding feeling was "alright mate, don't get excited, you've had your moment in the sun, sit down with your drink n shut up".    So that is what I did, in the shadow of Luke, a deer hanging from the wall with a facemask over his eyes.  Seems they put all sorts of different things on the poor creature.  Colin was terrified, having never met a deer before.  Never mind one without a body.  My new emergency beermats were required, my glass was a Doom Bar one, but being in magnanimous mood, I can forgive such details.

Ed dropped me in Woking where I had two required ticks before the late night train back to Guildford.  He left me with the warning words "Woking was once voted the most boring town in the UK".  Well, be that as it might, the 'Spoons was pretty highly charged for a Monday evening...... the roadworks outside creating the illusion that civilised society was being shielded from Tim's army. 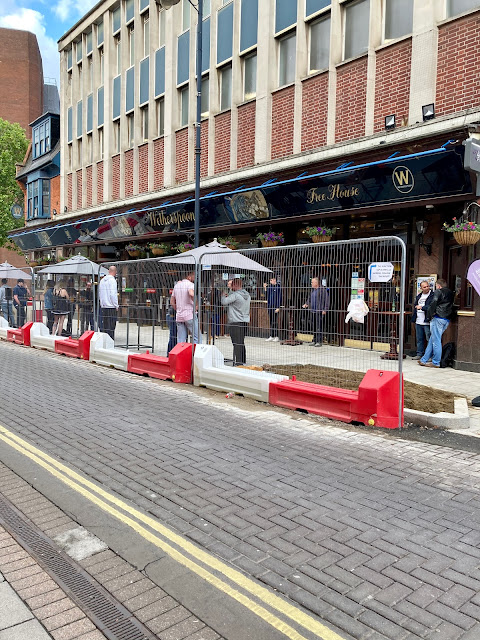 And isn't nice when the beer you select resembles everybody inside the pub? 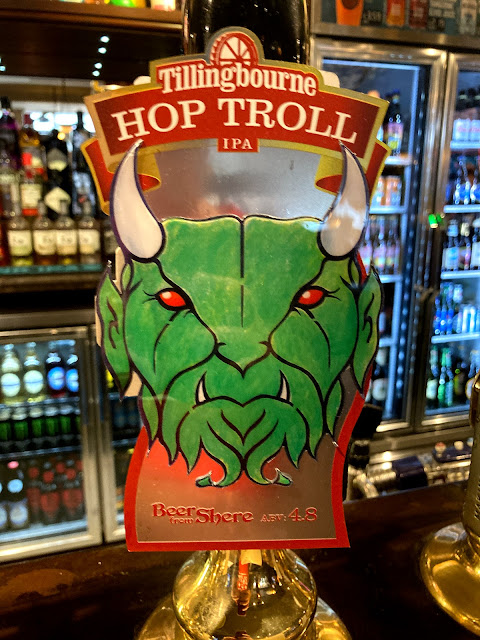 Herbert Wells, Woking (1776 / 2993) is H G Wells, and had I not been so slightly terrified of the highly charged atmosphere (I'm still not used to seeing more than about six people in a pub!), I might not have ensconced myself in my two seater perspex dome and actually discovered the quirks such as the invisible man in the window, the time machine, and the button to make the ceiling clock go backwards.  Well so says Sir Quinno when they allow him to cross the Berks/Surrey border for his once a year special treat.  I was too busy prising my GBG off for the table - it had got stuck - and trying not to analyse the stains on the way back from the gents too closely. An infrared torch could've been instructive. Having said this, you just got the impression at the bar that this was a tightly-run-ship of a 'Spoons on the whole, they actually use this one as a template to base their training on.  The carpet was a contender, and the locals were good value even if my perspex bubble didn't allow for overheard conversation snippets sadly, and I lost what notes I did make, so I just sat there trying to drink a bit quicker and not to sweat too much- <insert Prince Andrew local Pizza Express joke here>.  I left though, at least, feeling strangely alive!  Just as well considering where I was due next ......

And that invigorated feeling that you can take from a boots n braces 'Spoons was the perfect breeding ground for my final venue of the evening, the only Club in Surrey in the GBG.  Ey up!  You never quite know what to expect, getting in is usually the first obstacle.
Under the railway bridge i went (getting lost just once!), down an unlikely looking side line, and there it was.  Now where was that button that someone on Twitter had told me about?  No need to worry, a local was exiting and held the door for me.  Phew!  Or so I thought ...... 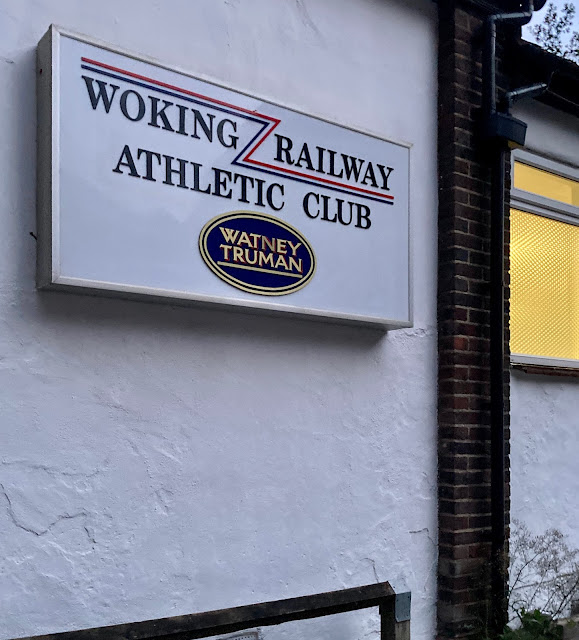 All eyes were on me as I squeezed between darts and pool table to the heavily perspexed bar at the Woking Railway Athletic Club (1777 / 2994).  The barman furrowed his brow.  "How can I help?" he asks.  Did he think I was lost and looking for directions?  Had an Amazon parcel or a Deliveroo to drop off?  "I just want a pint please" I squeaked.  "You's a member?" he asks, disbelievingly.  "I'm in errrrrrm CAMRA ..." I breathe out of the side of my mouth like a bloke buying nudie mags from his 80's newsagent top shelf.  "Can oi sees your card?" he asks in the voice of Tony Cottee.  Took me ages to locate it in my wallet, I've not seen in it myself in months but luckily it was there.  Relief all round, and the next ten minutes is me explaining BRAPA to him which he seemed to genuinely find interesting.  Lovely guy, and seemed the type who'd not humour someone for the sake of it.  Suddenly, he says "well, you can't stand here actually!"  meaning the Covid 'no one at the bar rules'.  I retire to a seat facing the bar, and perhaps he felt a bit sorry for me, because every time one of the locals of was slightly sober (it didn't happen very often) appeared, he introduced me and I had two nice chats with moustachioed chaps in 1970's cardigans about Surrey pubs.  Then I rang Mummy BRAPA and randomly put her on loudspeaker so she could join the chat!  I think I was getting a bit tipsy myself to do that.  She wants the 'tick' too now.  I should mention I paid for my drink using cash, for one of only two times out of 51.  I noted down some incredible overheard chats from the locals, but sadly deleted them all cos I'm stupid.  Everyone was very friendly here once I'd got settled in.  Getting out of a club is never easy.  "Press the button on the wall to release the door!" they all shouted.  I pressed a button.  And plunged the club into darkness.  The light switch.  Damn.  The landlord came over to help.  I laughed sheepishly and scurried off into the night, glad I was drunk!  Top place.

This was my latest finish of the holiday, too late to even call in for any food, so it was a case of being creative with my leftovers and make a mental note to not finish this late again in the future!
Tuesday would be a trying day, even if I only got 5 pubs done.  Join me for tales of that tomorrow night at the slightly later time of 11pm approx (cos am going to an aceYork pub with my friends group for first time since lockdown was lifted, woohoooo!)
Si
Posted by Si 'BRAPA' Everitt at 8:27 pm