Apologies if you noticed (you probably didn't) but I 'released' my 'Bonus Extras' blog too soon when actually, I'd done these three pubs earlier in the day.  Anyway, it's all just me rambling about pubs and long walks so it shouldn't ruin the continuity too much.  Here goes ......

Waking up on Sunday morning, the last of NINE consecutive days of pub ticking (a new BRAPA record), I had very little left to give, both physically and mentally.  My liver probably showed the most scars, luckily I couldn't take it out and examine it.  Plus that would've messed up my Travelodge room.  Every part of me ached.  My legs were a sea of cuts and bruises from various walking injuries.  I was sunburned, dehydrated and headachey and my dodgy left knee I don't like to talk about was feeling the strain.

I took pity on Colin and left him on the bed, my one concession to 'having a day off' and set off for Hersham. 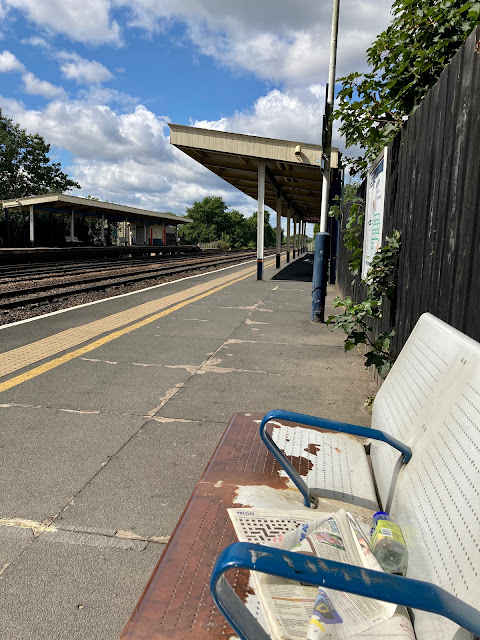 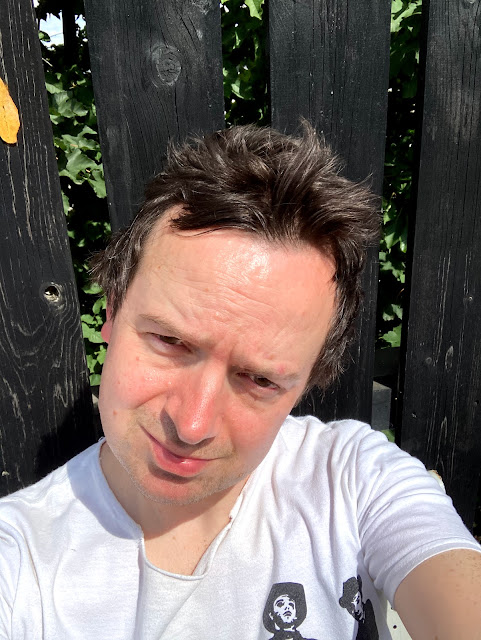 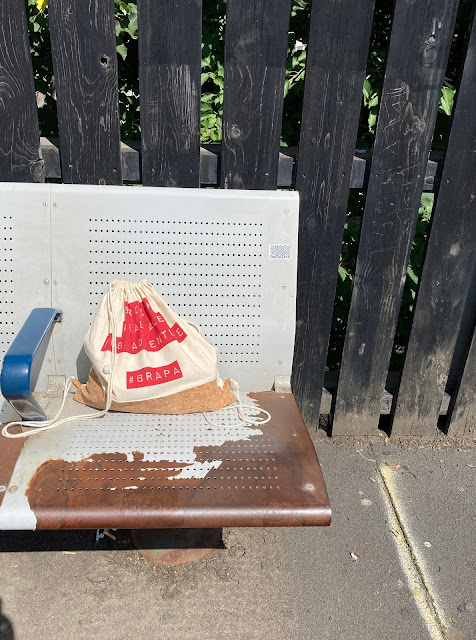 As I sat alone on Hersham station watching the non-stopping trains shooting past, I had to steel myself for one final push. I swigged some overpriced vitamin fruit drink, and set off for today's first pub.  I needed it to be good, and luckily I wouldn't be disappointed.

11:55am when I arrived.  A bit too early.  An old guy was already sat, half in a car waiting, poised to enter the second the doors flung open.  I could hear ABBA playing.  Remember when Mudgie told me you enjoy ABBA more the older you get?  Still the wisest thing anyone has ever said in a BRAPA setting, and I've met Protz and Lager.

I crossed the road and stood in the shade of this dry grassy area opposite the pub.  I took my eye off the ball for literally one minute, to reply to some BRAPA related comment on Twitter (think it was Eddie Fogden, can we shame him now?), and when I looked up, the pub door was open and man had already been served! 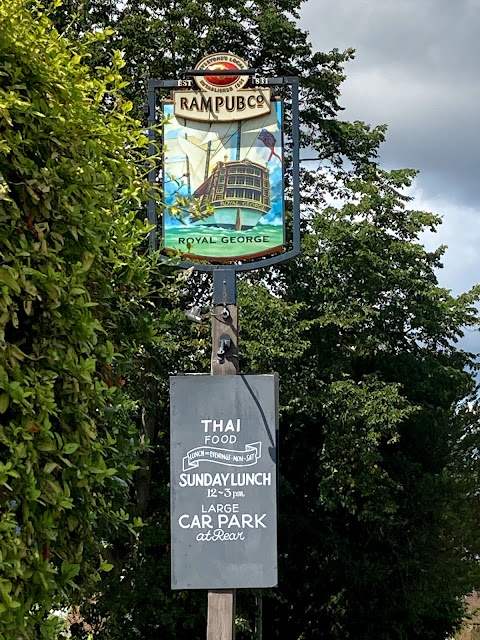 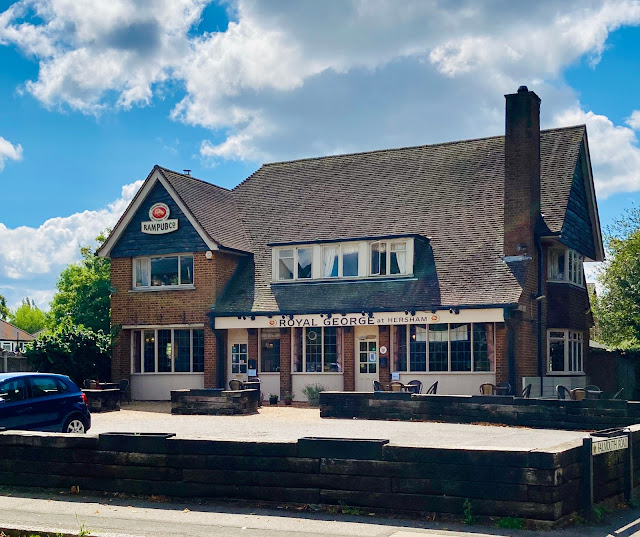 How I needed a good start to the pubbing day to get my motivation back, and how superbly the Royal George, Hersham (1805 / 3022) delivered on every front.  An excellent no-frills boozer, here was me worried all this talk of Thai food was going to detract from the atmosphere, but not a bit of it, a wonderful Young's house, large but homely with friendly staff and nicotine (yellow) coloured walls to evoke those old time memories.  The old guy was called Mario, turned out he was 91 and very sprightly for it I must add, too easy to make a Super Mario joke, and my 'physical age' at this moment in time was probably about 116 so no shame him outpacing me!  The kind landlady made a point of coming over for a chat with him before the lunchtime rush started.  And then a local couple who loved talking about the 'situation in Melbourne' did the same, he was a popular guy.  They asked him why he'd recently changed from his regular crisp variety.  Observant too.  They said their surname was 'Young' as though they might get a discount in a pub such as this!  I paid in cash, which was rare this week.  Track & trace wise, I think this was the only pub to ask for my postcode all week, so in my head I was trying to think what YO could stand for which was closer than York if it became a problem.  Maybe there is a Surrey village called Yokeltown I can make up if I get questioned.  No chance I'd get questioned, pub was far too relaxed and an assortment of chirpy local drinkers were assembling fast, drinking, standing up too quickly and going "ooooh aaah!" as forgotten lumbago returned to bite.  They did a lot of laughing, you know, the thing people should do in pubs.  Loved my pint of Young's Original, it seemed life-giving.  Sadly, I was on the clock as ever so couldn't relax for long.  After a quick loo trip, I tried to exit out the back gate but it was bolted which serves me right for trying to be too clever. 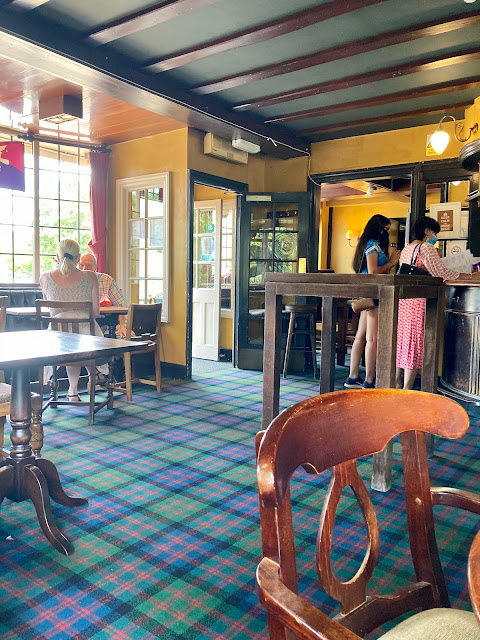 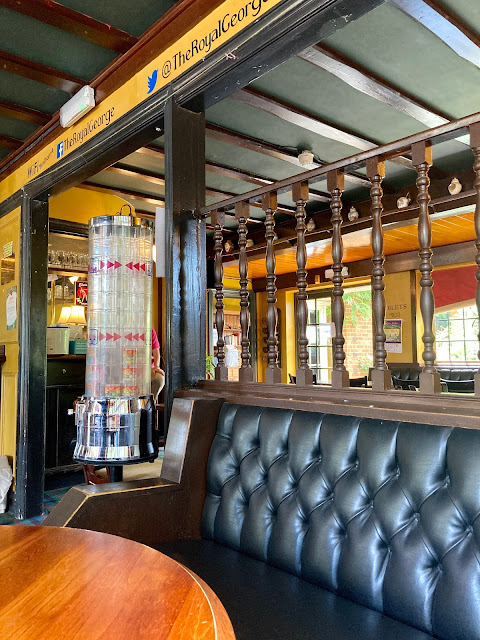 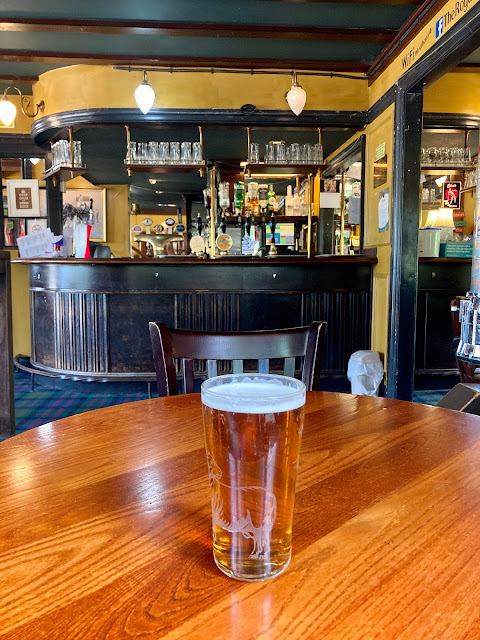 It was a fair old walk down to Walton-on-Thames with the rising heat, fairly busy main road and my various ailments I don't like to talk about, but at least there were two GBG pubs when I got there.

Here was the first, looking quite unlike the Royal George ....... 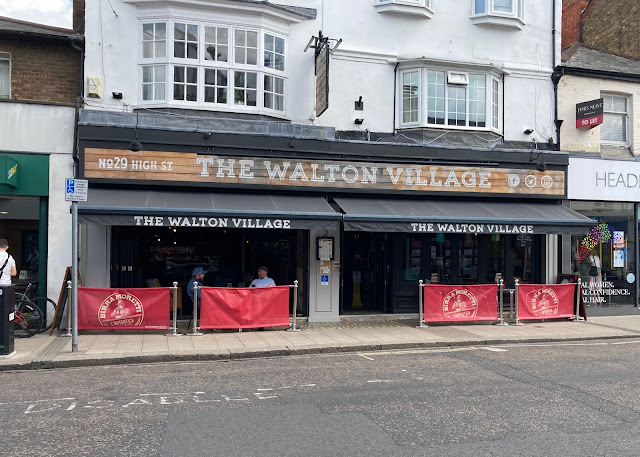 One of the most boring pubs I visited all week was here at Walton Village, Walton-on Thames (1806 / 3023) and on arrival, I tried to impress the guy who greeted me by telling him I'd downloaded the 'Urban Village App' in advance.  If I was hoping for brownie points, he simply waved a general hand in the direction of the only table that wasn't clearly marked with a number!  It took me so long to fathom this out, and create an account for a pub chain I'll probably never use again, that an older couple who arrived five minutes after me but demanded he served them there and then got their drinks quicker than me.  The Pride was the only ale on, and when it did finally appear,  didn't seem to be 'drinking as well' as others this week, but I guess £4.20 was cheaper than some.  On the way to the loo, I found an area called the 'Village Hall', a kind of slightly raised secluded drinking / dining area, and I guess whoever designed this place has never been to the Appleton Thorn equivalent in Cheshire.  On the way, a person of unspecified gender (not that it matters, #WokeSi2020TransRights) gently told me off for walking the wrong way, and when I pointed out that you have to admit it is a bit confusing, they seemed unconvinced by my argument.  I found the whole fake wood panelling a bit wearing, and it was with some relief when I finished my pint and headed off for Walton Pub 2. 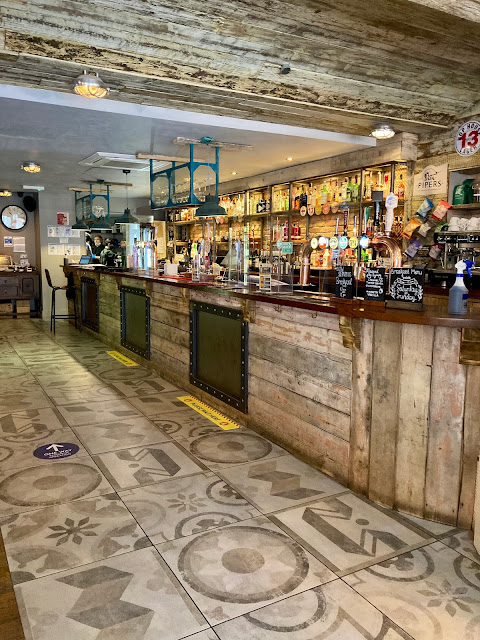 Just up the road on an impossibly busy road junction, the day had its second George already .......

Rarely has a pub been as empty all week as the George Inn, Walton-on-Thames (1807 / 3024) which was even more of an achievement for a sunny Sunday lunchtime in a busy location!  The guv'nor seemed a canny, if slightly stoic guy, if there were tears in his eyes at his delight in finally having a customer, he did well to disguise it.  My second Shepherd Neame pub of the hols, my second cheeky little pint of very nice Spitfire, and so bored was I at the absolute lack of action that I invented a joke.  "What do you call a film about a fish that got lost in a pint of Spitfire?"  "Finding Shepherd Neamo".  Thanks.  A tanned man did arrive, but looked unimpressed as though he could hear my joke in his head, so I went outside to the crummy little courtyard / smokers area where I found two more customers.  My turn to be teary eyed.  The windchimes tinkled in the breeze, then the Foo Fighters came on with surprising vigour.  The hubbie was making fun of Arsenal for winning the cup (not sure how), and the lady had the same hair as my line manager at work.  And that was that.  My overall message to Walton-on-Thames CAMRA would be 'if you don't have GBG standard pubs, perhaps best to forgo them so a different CAMRA with a stronger suit can take their places.  Though I suspect it doesn't work like that! 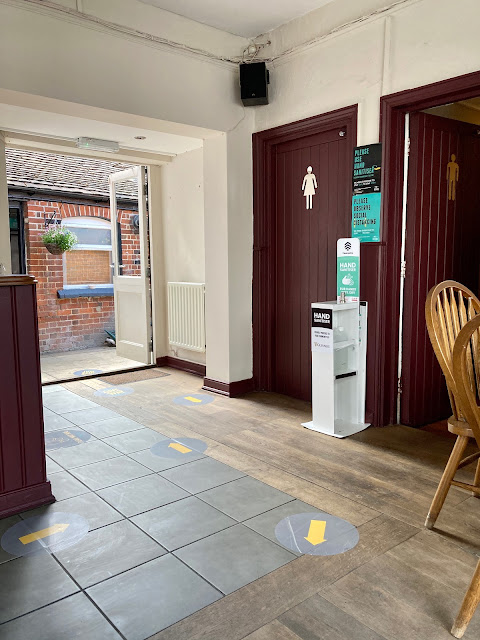 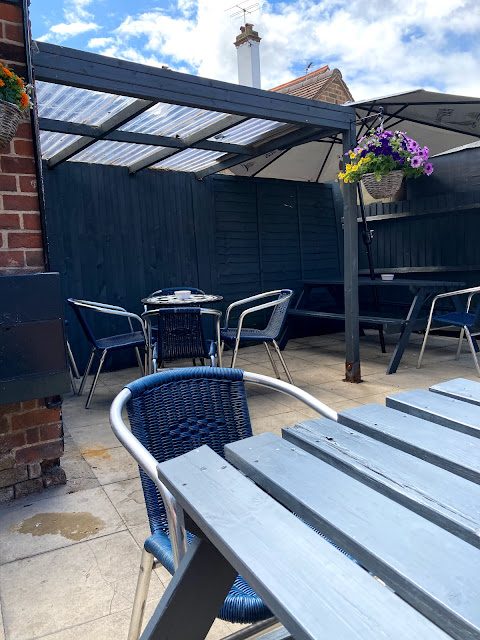 But don't worry about me, my next pub would turn out to be one of those surprising gems that no one tells you about.  Join me for that in the Surrey Bonus Features tomorrow  last night.  And I'll errm, tell you about Croydon tomorrow evening before I head off on the Bank Holiday Spesh.