Saturday August 1st and I'd finally hit an invisible wall, suggesting that in the future, seven days consecutive Brapping is probably the maximum I should try and attempt!  Day 8 of 9 today.

Still, the sun was shining, it was Yorkshire Day, and after my regulation Travelodge breakfast in a box of cornflakes, orange juice, flapjack & mini pain au chocolat, plus some fermenting mango I'd bought the previous day, I drank two coffees and felt semi-human again by the time I reached Surrey's favourite transport interchange, Dorking.

All I really craved was fresh air, a bit of exercise, and the pubs would just have to wait!

A good time then to get a tricky rural one ticked off, so I took a train to a place no one has ever heard of called Holmwood, and turned off down the secluded AONB wooded lanes of Moorhurst and Anstie, in search of the village of Coldharbour. 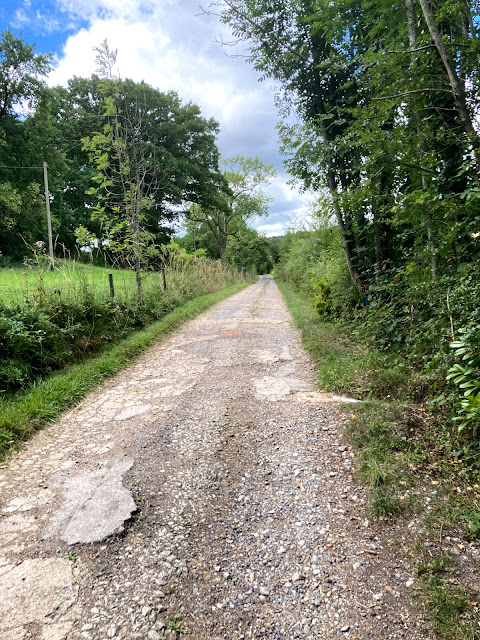 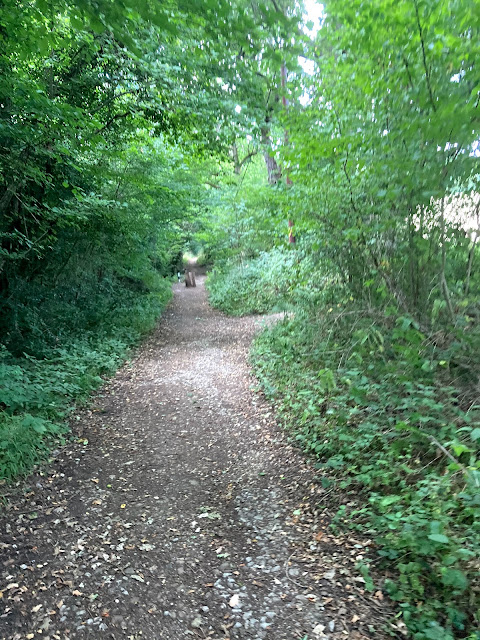 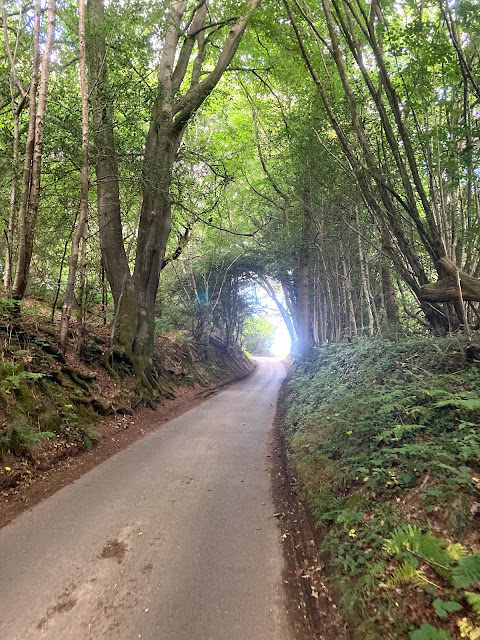 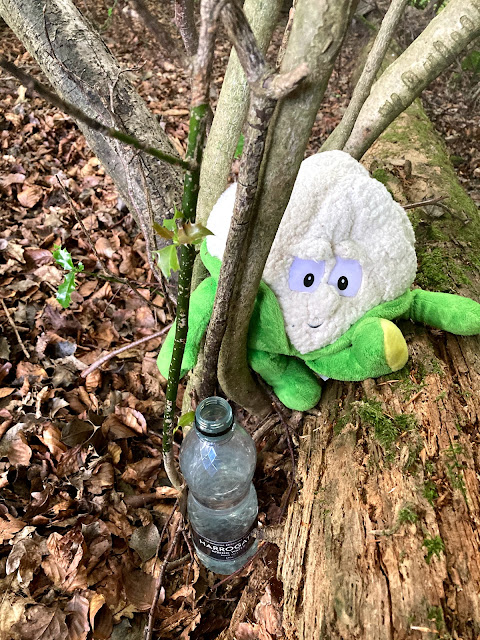 Col and I even stopped for a bottle of Harrogate 'gonna beat Hull City in the Checkatrade Trophy' Water and a sit on a felled tree.  Isn't BRAPA fun when you aren't rushing about like a madman/mad cauli?

Insect of the Week landed on my hand.  It didn't look much.  But it attached itself to me, lowered a prong into my hand, from which blood then dripped, and in the coming days, it'd turn into a very sore raised spot.  Cheers rural Surrey!

The village appeared from around a sharp leafy corner, a man with a beer festival tee shirt angrily strimmed a hedge, ironically the only person in Coldharbour not at the pub, which seemed to be dominating all life within ....... 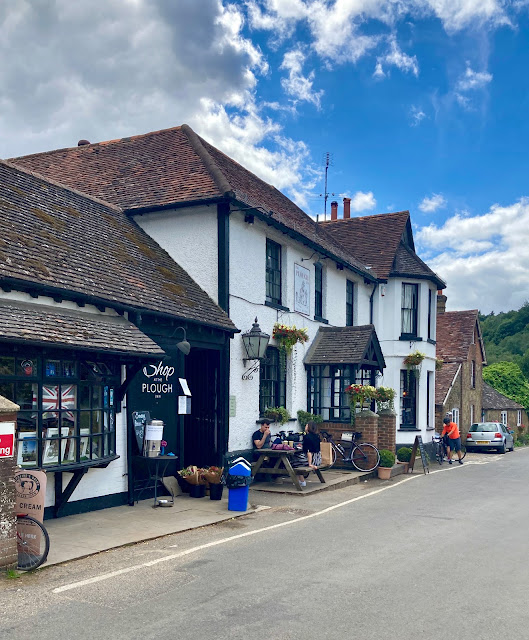 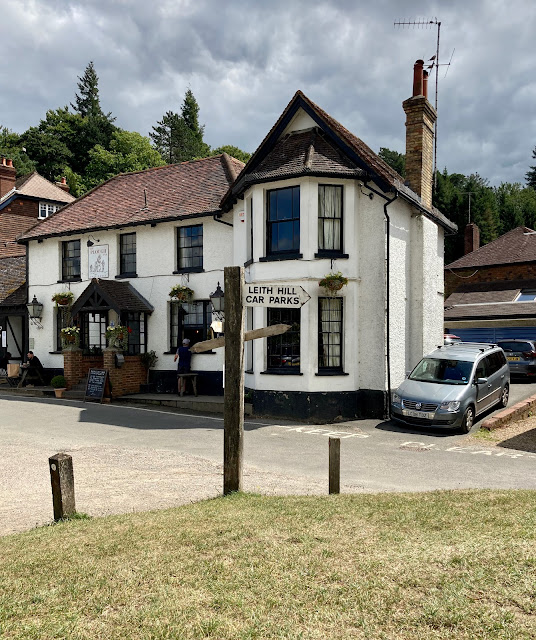 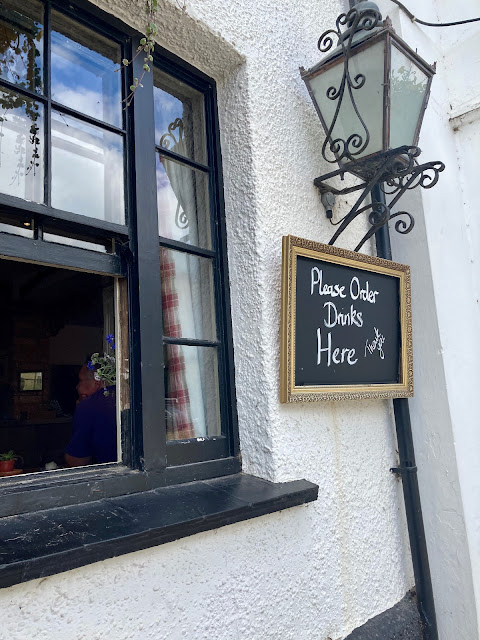 I walk into the Plough Inn, Coldharbour (1800 / 3017) where a pragmatic young lady tells me that if I'm not dining, I may as well stand outside and get served at the hatch which you can see above, as I can avoid the track n trace system.  'Ok as long as I can see what ales are on' I mumble, but she's already passed me to a young guy who is a little bit impatient and aloof as I try and repeat my ale question.  He doesn't reply, but simply steps aside so I have to squint through the hatch towards the bar where I can just about read one of them.  Wish I'd brought my binoculars!  Guy asks if I want to pay cash or card.  I tell him what ever is easiest for him.  This isn't the answer he wants, and he glares until I crack and hand over a fiver.  Tough crowd!  The village is dotted with drinking villagers.  We have posh women tending horses.  Bikers on a park bench.  Cyclists on a grass verge.  And all the picnic benches are taken by excitable yuppies and their excitable yuppie puppies which I wish were hush puppies.  Time to get creative, so I lean backwards on the village phone box and hope no one thinks it is still in use and tries to get in!  At one point, a German looking man peers inside and makes a comment about the wires, but all quiet otherwise.  I quite enjoy my time 'at this pub' (I use the term loosely) after this, Colin gets the odd funny look, a dramatic woman screeches at a dog which actually echoes through the village, two blokes who sound like something out of Harry Enfield discuss whether they are going to go rafting or body boarding tomorrow, and I just feel a bit superior in my 'beer only, Bass tee shirted, northern interloper' kind of way which am sure impresses nobody.  A novel way to bring up the 1800 landmark, cheers! 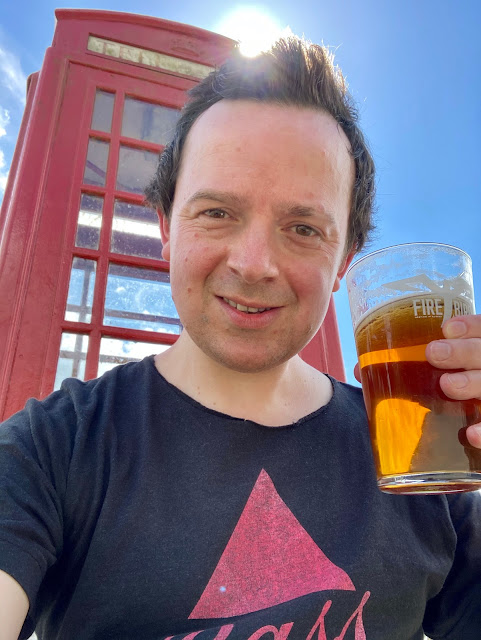 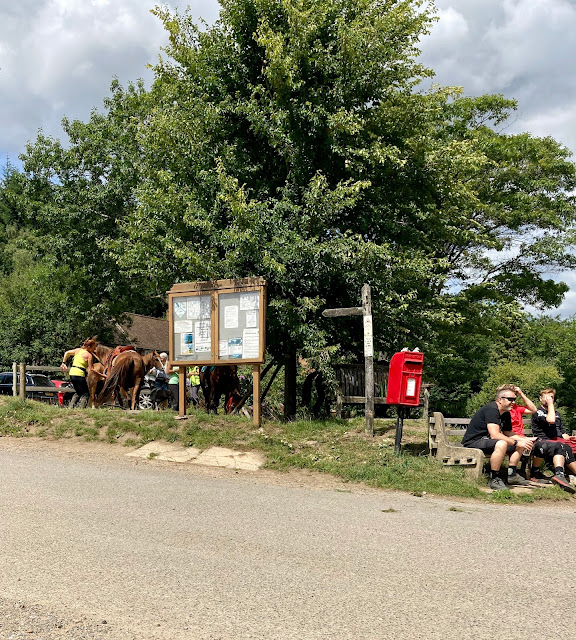 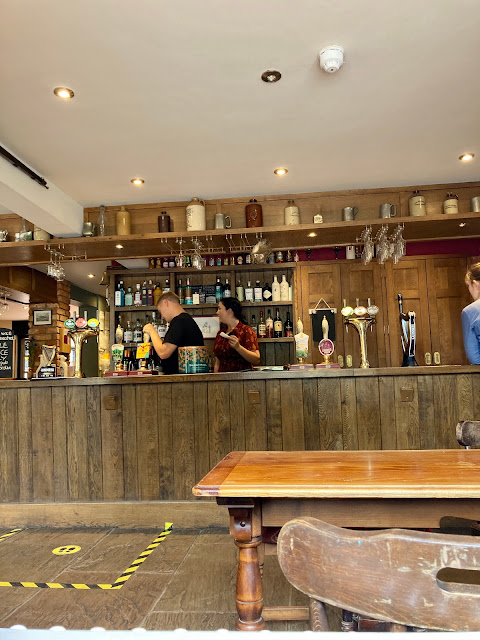 I retrace my steps and am back in Dorking soon enough.  Surely now is the time for Cobbett's , which had been closed by the time I'd reached Dorking twice earlier in the week.  Third time lucky?

Alas no, time for the tale of the closest I've come to getting a 'tick' without getting tick in BRAPA history.  You'll laugh, you'll cry, you'll hopefully share my rollercoaster of emotion ....... 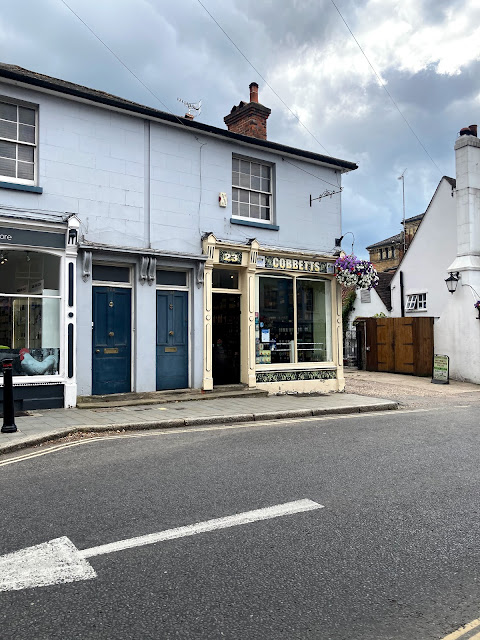 "Please can you put a face mask on?" is the first thing I hear, so not a good start!  "Oh sorry, I didn't realise!" I say hurriedly reaching for my back pocket.  "It's okay, we're all getting used to the new regulations" says the jolly owner chap.  But what I meant was that I didn't realise it was a shop!  "Ah, well" he continues ".... it is a shop up to this line, and then it becomes a pub!" he elaborates, pointing at a line on the floor, and indicating a smiling middle aged couple sharing a table just beyond the bar at the end of the room, foaming pints of cool cask ale in their hands.  "Do you have any draught ale?" I ask (I know they do), I dunno if that's the right term, but I want him to know I'm not after a can or bottle to buy.  He shows me a blackboard at my feet, and the bottom two beers on say cask beer, so I choose one.  "Pint please" I clarify.  "Oooooooh" is the noise expelled by the smiling lady at the end.  And then the guv'nor tells me he's afraid not, as they are full up, with one room booked for a function, the other one full, and obviously these lovely smiling bastards occupying the only table visible to me.  He tells me I can get beer to carry out, so I explain that won't do because I'm ticking off all the pubs in the Good Beer Guide and that wouldn't count.  I think he thinks I'm trying to twist his arm (I wasn't), becomes a bit defensive, so I explain I know he can't let me stay and I fully understand, as frustrating as it is, as you can tell he's a good guy.  The couple are smiling very sympathetically at me, which somehow makes me feel worse!  He tells me I might be best trying midweek, though I know I'll be back in York by then.  Some pub visits just weren't meant to be (unless I was up to say, 99% completion then I'd camp outside like Duncan does).

I skipped back through Dorking with a fake smile on my face, feeling slightly embarrassed actually, as I'd probably just walked purposefully past all these shoppers in the other direction 5 minutes before.  Luckily Dorking has quite a smiley good humoured nature about its residents.  Unlucky as the town was pub wise this week, I got a good feel for it.

Back at the station (a good 15-20 min walk), I needed a morale boost so headed for Epsom which even at this late stage of my holiday, has three whole pub ticks.

The first two were well off centre in quite a picturesque part of the town, but close together, so I headed to them first.  I stumbled upon the first, when it looked like I'd walked into a pretty housing estate by mistake!  But there it was, hiding around the next corner ....... 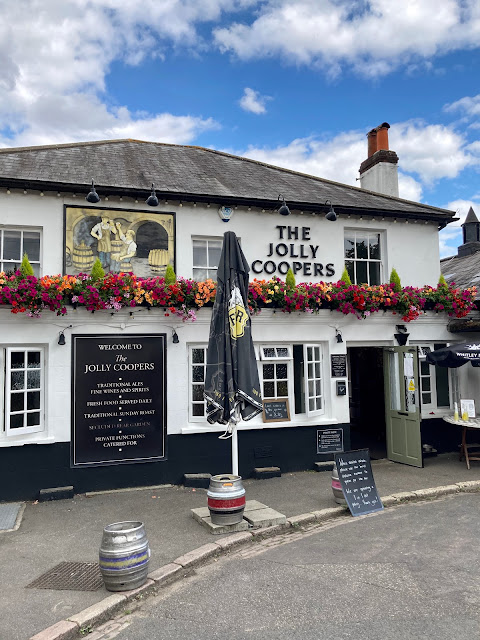 Looks pretty doesn't it, the Jolly Coopers, Epsom (1801 / 3018) although the first thing that struck me, which I failed to photograph, behind my lens and to the right, was an outdoor drinking area which was a totally cacophony of twilds running wild, dogs and laughing diners in bulging lycra.  The guy who greets me at the entrance, is very impressive, and wins the record this week for 'most words per minute' as he gives me the Covid Manifesto.  He didn't stop for breath, and I sure couldn't take it all in.  But they key point was 'I could actually sit indoors', and all I wanted was a pint of cask ale.  Knowing where the toilets were is always handy too when you're on the pints (& bottle of water earlier!)  I saw a local ale from a place called 'Fuzzchat'  I'd not seen before, and whilst it was kept well, it just tasted a bit vegetably so not to my taste.  The pub was not memorable, one of those which was noticeably an old building but modern refurbs had taken their toll.  Being so quiet in, watching the staff interaction was probably the most interesting thing, that and a few demanding customers, but the 'banter' between the 4 young staff was good and it was a happy pub, which sort of made me happy.  After Cobbett's, I was no longer taking any pub tick for granted so was thankful to the JC for making this a nice, easy experience.  Had to pay on departure (pet hate) but at least it helped me hone my 'don't leave without paying' spiel to the excellent brown haired one! 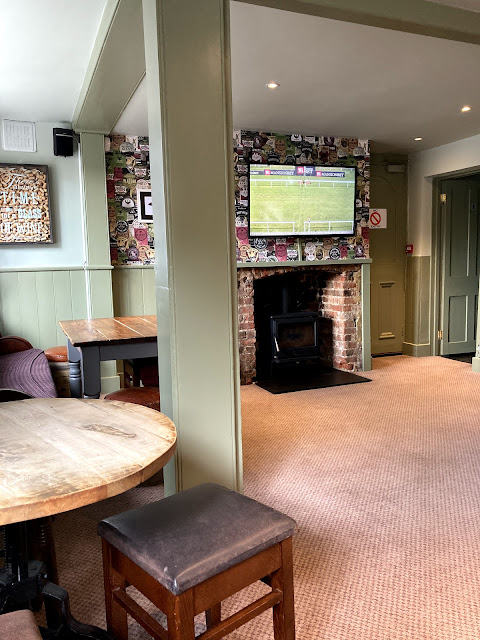 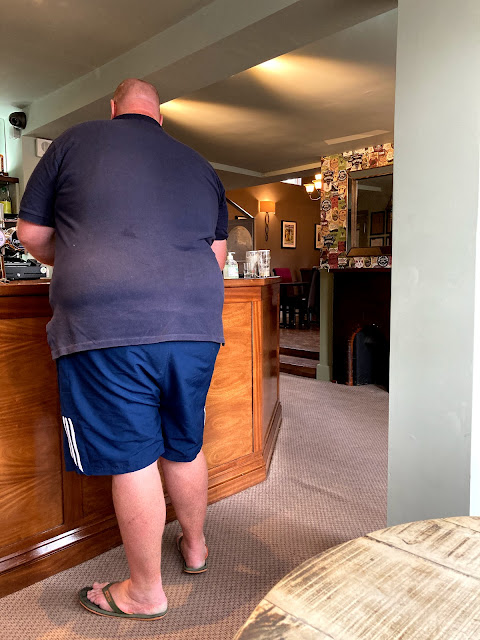 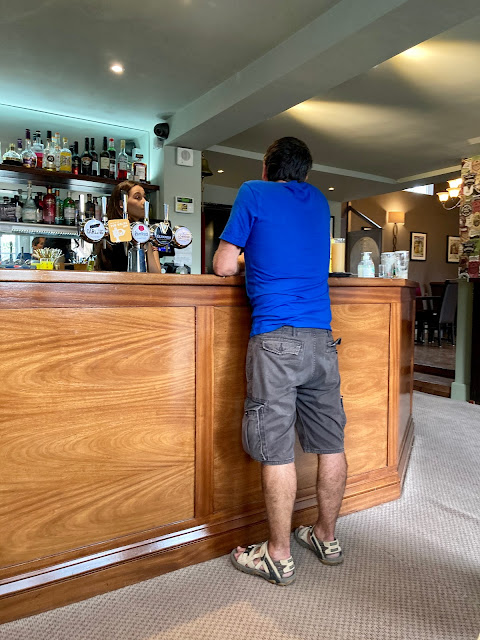 Two more Epsom pubs to come, including 'bad staff moment' of the holiday, plus a Tongham bonus.  Join me in Part 16 for that one on Monday evening, we're nearly there now thank heavens.