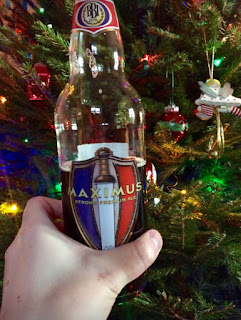 Ho ho ho!  Or is it Bah Humbug?  Well, however you feel about this 'wonderful time of the year', there is one thing that cannot be denied .... as December moves steadily on towards Christmas, pubs are going to get 8.88% shitter (according to offical BRAPA research) as the Twismas Twumper gang block bars up and down the country for their once a year pub visits.  Some won't be able to remember how to observe proper pub etiquette, most will pay by card, some will order mulled wine and cider.  Some might even bring mistletoe, along with their camel toe, whilst singing Mariah Carey in your lughole.  Take care.  And if you find yourself in a nightmarish situation such as this, remember, it could be worse, you could be like me, having to tick every pub in the country on the recommendation/whim of a bunch of faceless bearded beer bores.

So what has BRAPA got planned for the festive season then?

Well, the first cardboard chocolate will have been pushed out of the advent calendar by the time you read this, and I will have completed East Yorkshire, making it the second 'county' from GBG 2019 completed after Central London.  Big thanks to Father BRAPA here for his chauffeuring efforts.  I need to write my blog on those final 4 pubs, but look out for the Board Inn in Bridlington, a late contender for 'pub of the year'.  As for the Marine Hotel in Hornsea though, good grief!

The following week, this coming Saturday in fact, I'm down in London for Millwall away, a real relegation six pointer for the wonderfully inept Hull City.  Guess what the FA Cup Third  Round draw (game on 5th Jan) has just spewed out?  Funny how often things like this happen!  Anyway, Tom Irvin is choosing the pubs this Saturday (8th), in a place that has a special meaning to him.  All will be revealed!

On the 15th, BRAPA man of the year contender Martin Taylor looks to enhance his growing reputation in BRAPA circles with another Cambridgeshire extravaganza.  Meeting him in Ely, I've got unfinished business in Little Downham which dates back to the summer, before hopefully 5 more ticks.

And on the 22nd, I may well be back down Saaaarf for a third consecutive weekend as I have a 'free' train ticket to use up.  Am considering spending half the day in Cambs to take the pressure off my final trip to the country in Jan, perhaps combine with some cheeky Herts or North London pubs later in the day, but the plan is sketchy.

Boxing Day sees a car trip to Preston, Lancs, where Hull City are playing.  We'll be linking up with BRAPA legend SeeTheLizards, and taking the 'plunge' at a place called the Plungington Hotel which sounds somewhat 'delightful'.


And on the final Saturday of the month, the 29th, there is fun to be had in Lincoln, which was originally going to be Skegness, then Gainsborough, but eventually became Lincoln itself.  A Newark or Retford bonus isn't beyond the realms of possibility to end the year.

Then join me on New Year's Eve, where I'll buy in a load of party food and colourful cans and do my 'year end awards' ceremony 'LIVE' sort of.

And to supplement this wonderful five Saturday month, I see no reason not to crack on with Friday night West Yorkshire BRAPA.  You see, I'm old, and people have stopped inviting me to parties and gatherings or even 'catch ups'.  And good.  Much rather sit on my own in the corner of a pub with a question mark at the end of it's name in an irritating jumped up West Yorkshire town which is all sweetness and light, lesbians, vegans, ghosts and craft fairs on the surface, but dark Buckfast addicted homeless squalor with locals pushed out, when you scratch beneath.  And that is truly Christmas.

So how did November go in BRAPA world?

Well, to say I had zero time off work, and it was a FOUR Saturday month, to achieve 31 ticks was something of an achievement.  30 was my previous record, averaging out at 27, so I was satisfied.

Highlights?  A great day in Cambs.  Got VERY drunk in St Neots, bit embarrassed in the Olde Sun but never mind, RM the perfect host earlier that day, glad he wasn't with me late on!

A bonus Glasgow trip helped, and nice to see John Depeche Modem in Darlo even if he is the craziest Sussex guy with the gammiest leg you could hope to meet, a lovely chap.

Birmingham away was a cracking Hull City day, really liked both the Halesowen pubs we did, they couldn't have been any more different in styles but Swan and Fixed Wheel both impressed.


17th was perhaps my favourite day of the month, when me and Dad did some utterly crazy pubs in the Holderness area of East Yorkshire.  Other wordly was the word, the daytime karaoke in Lelley was jaw dropping even when I think nothing surprises me any more!  The other 4 were all classics.


Another great day was had in West Yorkshire with work chums, Bradford threw up some crackers, Halifax a tiny bit disappointing after recent amazing trips, but you can't win them all.


And I got back on the Friday night trail with some amusing West Yorkshire pubs, though not too much to really excite, most were rather bland.

The best three going through into the year end awards .....

And the ones I found the least enjoyable (on the day):


So plenty to look forward to between now and NYE, take care, and if you feel yourself being pushed out by the Christmas pub goers, remember you were there first!