BRAPA - My Coffee is Offie & Other Assorted Tales from East Yorkshire

QPR away didn't seem like a good idea (it isn't like we'd win is it?), and with the trains in chaos and the first day of 'Silly Season' (1st December) upon us, Dad thought it best to err on the side of caution and he drive me round East Yorkshire for the final four pubs.  I wasn't gonna refuse a great offer.

In fact, I tried to push my luck.  "Oooh look 'ere Dad, 'Yorkshire Ales' in Snaith is a North Yorkshire tick we could do on the way back?" I suggested, but Dad (presumably because he's a closet 'Strictly' fan) said he wanted to be back for 6pm.  And although I'm not judging his chauffeuring skills against Martin Taylor of Cambridgeshire fame, I think it is fair to say that not only would Martin have driven to Snaith, he'd say it was near enough outer Milton Keynes to get a couple of ticks done there too, but just so he could laugh at my pain!

But hey, 'don't be greedy Si you overprivileged tool' was the overriding message in my head.  We arrived in the bucketing rain in the village of Walkington well before 11am opening so had a flask of tea and a hot cross bun (a classic BRAPA breakfast).

By 10:50 though, a well-fed couple of a combined age of 786 entered through a back door.  "Go go go!" I cried, like we were staking out the joint in The Sweeney.

So we walked in through the back, and it was all cake and coffee in Eliza's so I politely enquired about the beer situation and one of the nicest barmen you could hope to meet with the air of a vicar about him explained the couldn't serve us til 11am but if we came round to the front, we could wait in front of the fire for ten minutes.  A great start, even if it 10:50am-11am became the LONGEST 10 minutes of the week.  "We don't have a ...... problem" explained Dad,  as I clocked watched, shivered and paced up and down.  So I explained BRAPA in an attempt to show him I was seriously healthy and sane (which obviously didn't convince).   The fire was grand, and the 'Fergie' is a bit of an EY institution, and Walkington got famous a couple of decades back when X-File Gillian Anderson was said to be seeing a bloke from the village.  It could've been "Ian Jackson", a carpets and electrical retailing legend that Dad knew.  He reckons we chatted to him in this very pub, though I have no recollection of having been here before!   We tucked in to our lovely pints of 'Muddy Boots' and although you could see this pub had a bit of a dining bent, we were here at the right time, a picture of warmth and professionalism , the veneer only slipping slightly on the way out when an angry girl remonstrated with the fire for not remaining lit enough, though seemed fine to us.

Short drive into Beverley from Walkington, but Dad predicted traffic would be chaos so best to get in as early as possible.  Past experience shows us it is a tricky place to get around and get parked, but we cut our losses and parked in our favourite car park.  "Free today mate!" shouted a bloke as Dad tried to put coins in the machine.  We had plenty of little quirky incidents of luck today, think my ole' Grandma Betty was looking down on us both!

A short walk past the station took us down a narrow alleyway, it still wasn't quite 12 noon, but at least I got to meet the locals:

Well, what an ancient gem this was and I have to say, as we walked through the courtyard in the blustery rain and wind wondering where the 'actual' entrance was, it did put me in mind of the Blue Anchor at Helston and you don't get to say that too often!  I pushed a door and a gaggle of staff, some with hoovers, some with cleaning buckets and some with Christmas decorations, says "oooh we're not quite open yet".  I'd already spied something that looked like a fire and was just about to ask if we could wait here in the 'warmth' (deja vu) when the pub matriarch stepped forward and said just that.  But such was the lameness of the fire, and the narrow old pub layout meaning we were still 'always in somebody's way' that it didn't quite have the magic of the Walkington intro, even if it was aesthetically a much more pleasing pub.  A ditzy barmaid who shambled about, served me a beer I didn't ask for and didn't know where the gents were, finally served us, and we sat in the corner where two flat capped locals arrived.  The vocal one didn't trust a beer made with American hops.  "Has anything good come out of American apart from soap operas?" he said and it still puzzles me.  Luckily, our shambolic barmaid had been replaced by an upgraded version, but even she didn't know what to say.  He said something else weird two minutes later but sadly I've accidentally lost my notes!

Back at the car park, Dad wound the window down to tell a load of people they didn't have to pay, and they thanked him like he was the head honcho of the Beverley Traffic Goodwill Service and then we took the drive out to the East Coast for my penultimate East Yorks GBG tick of 2019 in Hornsea.

How exciting!  Well, until we arrived.  I took a photo of Dad next to a smoking woman in the rain and told her she was a star.  She just looked skeptical and carried on with her fag. 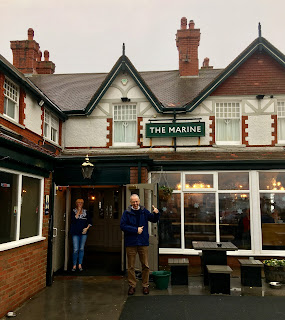 Straight into the bogs after the longish drive, and down the corridor near the kitchens you can smell the stewed veg and stale old lady urine which evoked memories of Bridlington's own Marine Bar, but in the 90's before it became a real ale haven!  Into the bar, avoiding the random Princess Anne cardboard cutout and grabber amusement machine they'd nicked from the fair, and the full horror of a Greene King range was on.  It was either a house beer (so GK IPA) or Abbots Ale.  I went Abbots.  I had a good Abbots in Shrewsbury in 2001.  But this was pretty dull.  The staff moodily wore 'drink promo' t-shirts like they were appealing to a much younger crowd than the few miserable 71 year olds dotted around the building.  They all watched L**ds v Sheffield Utd, which seemed a fitting game for such an occasion.  "I'd like to think the majority will be supporting the Blades" I said to Dad, who looked at me like I'd made the most stupid comment of the day, which of course I had.  "G'wan L**ds, marching on together, bring back corrupt Revie and the 70's thugs, Bowyer and Woodgate our heroes, we BELONG in the Premier League" etc etc the pub started (probably) chanting (not very catchy),  I admitted defeat and Dad looked superior, as he so often does, ooops, I mean "is".   To be honest, me and Dad had the 'prime window seat', overlooking the sea, but even that looked crap in this pub in this weather.  Oh, and let's not forget "I'd Thought I'd Seen Everything In Pubs But I've Never Seen That Before - Vol 14", when a lady brought a coffee back to the bar, saying it was off!  "Try it yourself!" she said to the barmaid who declined, saying it was strange cos the machine had been cleaned recently or some excuse.  Crikey! 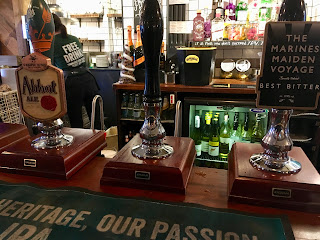 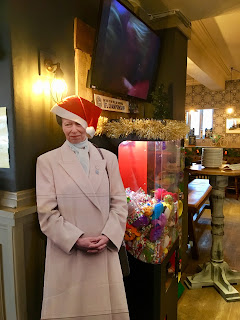 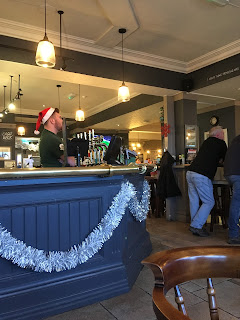 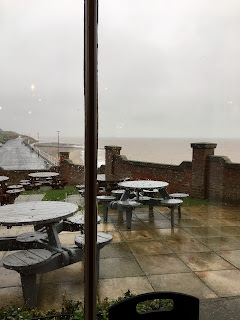 And that's why you have to love East Yorkshire TWAMRA.  They keep life interesting for us pub tickers by throwing in an annual 'wild card' pub, whether it be the Coach & Horses at Welwick, the Nag's Head at Preston, Lord Nelson in Hull, a pub where you just think 'how the flippin' eck did that get in?'  In my experience, only West Cornwall come close with their FA Cup Third Round Draw Bingo style of selection, as the ghost of Bert Millichip pulls out "number 63, Victory Inn, Towan Cross" for a second year in a row.  Wonderful.

Well, one pub left and expectations weren't exactly high as we meandered down through the wonderful Old Town, where the Dad's Army film was done a few years back, they didn't need extras let's put it like that!  But pub wise, yeh, not expecting a lot, after all nothing good has come out of Brid since my Grandma was carried out in a coffin, the local tourist board slogan. 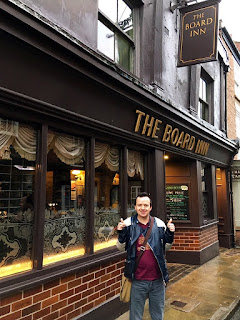 But then something weird happened.  It was clear we were in somewhere rather special.  EY CAMRA redeemed, a lovely moody dark old multi roomed pub with etched windows, roaring fires, free cheese n biccies on the bar and some of my fave ales as regulars.  It had to be a Titanic Plum Porter, but you know, Ghost Ship, ESB, Proper Job, oh yes, classics one and all.  Anyway sorry, you don't want to hear about boring bloody beer, you want to hear how a group in the corner were debating whether John Deacon from Queen was actually dead but hadn't admitted it, or the understated but friendly barman watching our 'pub tourist' reactions to the pub with a look of amusement.  "There's more rooms upstairs" he said, realising if we were impressed by the downstairs, there was more to come.  We climbed the stairs, and it all became very Thomas Wolsey of Ipswich, historic rooms all with their own style, Georgian or summat.    One of the rooms had a fire and by gum, it was the closest to the my Mum and Dad's house I've been in, if Mum served Plum Porter at half hourly intervals.  I looked at my watch, 3pm exactly, we'd made great time.  "Ha ha, would you rather be at Loftus Road or here?" we joked as we supped our ale and breathed in nice woody smoke. "Gorrrr bloimey, you've faaaaand the best room in the 'aaaarse" said a trio of cockney's who had somehow been allowed in to temporarily disturb our calm.  Time for a cheeky extra half, and then back to York.  "Looking forward to your write up of this one, you'll do it justice I'm sure!" said Dad, so no pressure then..... 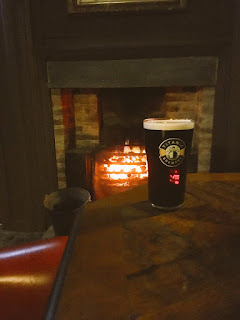 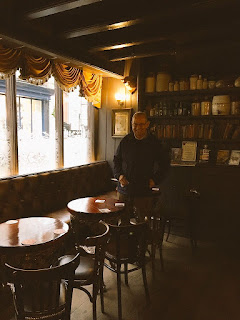 Back in York ridiculously early, time for a sobering loo break and stop off at one of my favourite York pubs I don't get to enough, Waggon n Horses, where the Citra was drinking well alongside the Batemans and we sat in a room that had a pool table full of moths the first time I came here when it was a down and out nothingness in 2005, so a fun fact for you moth lovers out there.  And then the news Hull City had won, we nearly fell off our chairs!

And there we go, first 4 pubs of December done.  Busy week coming up, but planning on getting to either Brighouse or Castleford on Friday night depending on my mood, so watch out for that!

Have a good'un, Si