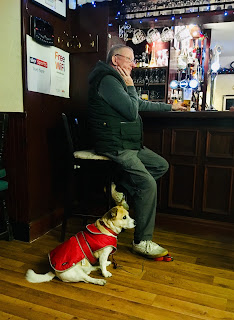 My second visit to Castleford for BRAPA pubbing, the first time in over four years, so I was well overdue an outing to this iconic town which will provoke a reaction (usually nervous laughter and a wincing expression) whenever you mention it to anyone else in the rest of Yorkshire.

It is home to one of my best overheard conversation snippets, when a young bloke said to his Dad "you either love him or hate him .... just like marmalade!"  in the wonderful Junction pub.

It is true that Cas Vegas is more Mary Shelley than Pete Shelley, but some rather OTT neon Christmas decorations livened up a windswept rain soaked walk through the dark town centre.


I then walked over the River Aire (which lacks the quality of the Ouse), past the meanest looking Shell garage you'll see, crossed the road, and the pub soon came into view.

So I walked into this traditional two roomer, aware I was only the second customer, asked what ales were on, and after about 5 minutes of much effort trying to pull through whatever dark pint of Roosters it was, I finally had a pint.  But the staff were more concerned with organising and laying tables for a big Christmas dinner coming up in an hour or two (I asked so I didn't get stuck with any of that sort of nonsense).  We had our hero of the hour, landlord Kevin with his cheeky gap in his front teeth and slight limp, Mrs Griffin (not Lois), and Daughter Griffin (not Meg) who was doing all the table organising.  "Who'd have thought setting up for Christmas dinner could be so stressful?" she wailed having had to move a side table for the 15th time.   "Where do you want me to sit, I don't wanna get in the way?!" I asked, because under the circumstances, I just felt like I was an unwelcome complication in the grand scheme of their evening, so Mrs Griffin found me a table in the 'drinkers' area (two tables), said "there ya go luv" and handed me eight beermats, though I only needed one in truth.  The bloke with dog (top picture) was nice, making jokey comments about the forthcoming meal, though the most animated he got was when the video for 'Handbags and Gladrags' (Stereophonics version) and he acted like he'd never heard something so wonderful.  A few local wastrels started to appear, then staff and locals alike got their Xmas jumpers out for the lads, so that was my cue to leave! 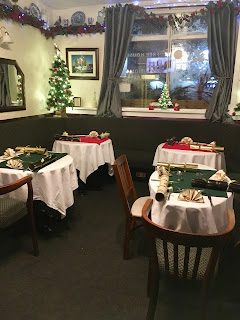 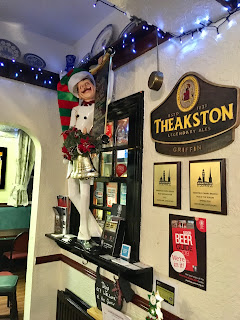 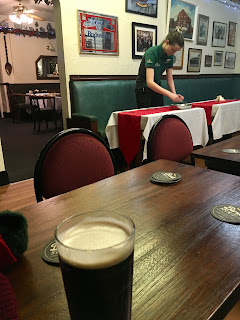 So here we are, back in York, and a rare "blog on same day I visit the pub" experience.  Pub left me feel happy, smiling when I left, and I think it was great how difficult it was for them organise a big Christmas dinner, sign of a proper family pub not used to such craziness!

Bit of drama at the cashpoint when the Lloyds one didn't give out any cash, so two drunken men gargled at me (do I look like a banker?  DON'T ANSWER THAT!) and I directed them to the Yorkshire one next door which spewed out tonnes of cash with Branson's face on, probably.  I need paying more for being an ambassador.

Then, I saw some mysterious kind of bar/cafe/micropub belting out 'Ever Fallen in Love' by Buzzcocks with a woman singing along at the door (may have been the Tap n Tackle on doing a quick Google Search) which was a nice touch.

And you know when pub signs have a letter or two missing and it can be amusing, well I found this one ......


And that was that.  They must've improved the Cas - L**ds train service, seem to remember it taking about 1.5 hours and trains were like every 4 hours back in 2014, so rare rail network improvement?

Back in York nice and early, good, and bed now cos early start for Meewaww tomorrow morning.